REVIEW: “The King was pregnant”: Gender and Politics in The Left Hand of Darkness 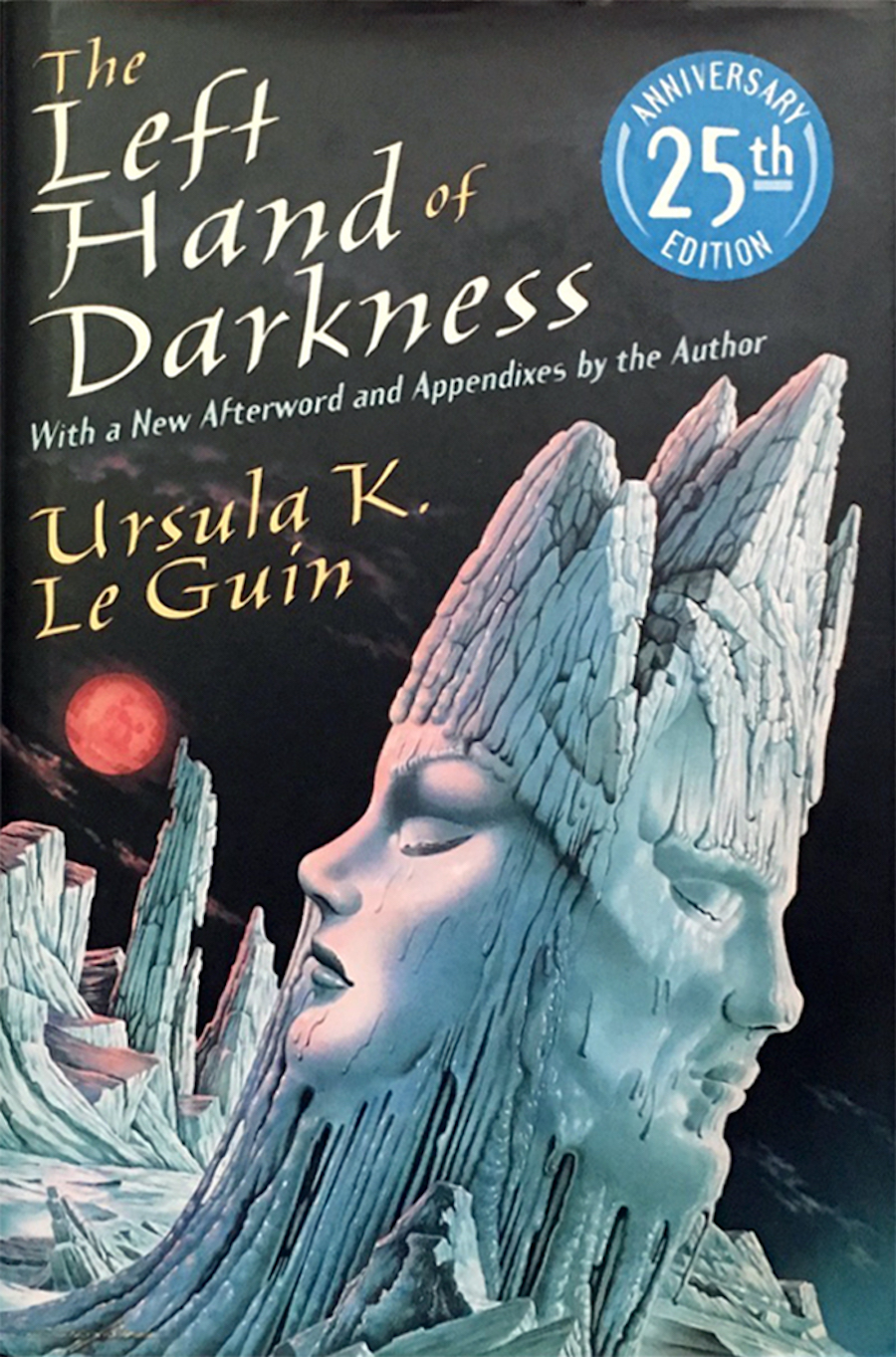 No discussion of gender in science fiction is complete without Ursula K. Le Guin’s ground-breaking 1969 novel, The Left Hand of Darkness, just as no review of The Left Hand of Darkness would be complete without a discussion of gender. Le Guin’s novel is many things: a thought experiment (“What would a world be like without gender?”), a survival story, a romance, an epic, political fiction, science fiction, feminist fiction. It does it all, and it does it well.

The protagonist, Genly Ai, is a human man sent as envoy to the planet Gethen, a winter-world inhabited by ambisexual hominids. Gethenians are genderless for 24 days of a 26-day lunar cycle and adopt a sex during kemmer, their fertile window. All Gethenians can become male or female during kemmer, and can father children during one cycle only to later get pregnant and give birth in another, leading to the peculiar phrase with which I have titled this review: “The King was pregnant.” The announcement of the King’s pregnancy sends his subjects atwitter, for the heir would not be “another kemmering-son, of which he already had seven, but an heir of the body” and many people “said he was too old to be bearing children, and they got hilarious and obscene on the subject.” The King’s pregnancy is one of many moments which blur the line between sex and politics, a theme which the novel handles with sensitivity, intellectual curiosity, and, inevitably, stumbling human awkwardness.

Le Guin explores the social and political possibilities of a society without sexism—in a society without gender as we know it— through the eyes of an outsider. At the start of the novel, Genly finds it difficult to see the Gethenians through their own eyes, instead “self-consciously seeing a Gethenian first as a man, then as a woman, forcing him into those categories so irrelevant to his nature and so essential to [Genly’s] own.” Genly is forced to confront his internal biases and assumptions through his relationship with Estraven, a Gethenian politician with whom he makes a dangerous 80-day trek across a frozen wasteland. Le Guin’s novel is particularly relevant today, as society is making the same stumbling steps as the Terran envoy toward understanding gender as a spectrum rather than binary.

What Gethen lacks in sexual politics it makes up for in a complicated social etiquette made up of unwritten rules of formal courtesy that govern Gethenian behaviour. As an autistic person, I find myself relating to Genly’s stranger-in-a-strange-world outlook on these rules, which, like his ignorance surrounding the nonbinary Gethenians, helps readers question the status quo. The book’s political themes about tribalism, treason, and underhanded politics also continue to be poignant, anticipating political alliances and resentments that will be familiar to modern readers.

Perhaps the book’s only weakness is its reliance on male pronouns rather than neutral pronouns for Gethenians, who live beyond the binary—a weakness that, had she a modern vocabulary, Le Guin could have moved beyond. However, for a book written in 1969, Le Guin’s novel not only holds up, but is more important now than ever. It raises the right questions and pushes them toward new and exciting answers. For lovers of intelligent, feminist sci-fi, The Left Hand of Darkness is a must-read.

Casey Lawrence is a Canadian grad student studying English Literature. She is the author of two bi+ YA novels, Out of Order and Order in the Court, and the co-editor of an anthology of poetry and short prose, 11/9: The Fall of American Democracy, all proceeds from which benefit RAINN and the ACLU. Follow her on Twitter: @myexplodingpen or like her on Facebook: caseylawrenceauthor.

Review by Katelynn Bishop I had a brief exchange several years ago, which bothered me at the time, but for reasons I didn’t fully piece together until reading Shiri Eisner’s book. I was in Boston, and I was explaining to a co-worker my experience of the bi community...

END_OF_DOCUMENT_TOKEN_TO_BE_REPLACED

REVIEW: Authentic and Free: A journey from shame to self-acceptance, by Courtney Long

END_OF_DOCUMENT_TOKEN_TO_BE_REPLACED

REVIEW: The Elephant of Surprise, by Brett Hartlinger

Review by Robyn Ochs The Elephant of Surprise is the fourth book in Brent Hartlinger’s “Russel Middelbrook Series.” Russel, the protagonist, is a gay high school student. The two other major characters are Russel’s best friends Min, who is bi, and Gunnar, who is...