Present and Accounted For 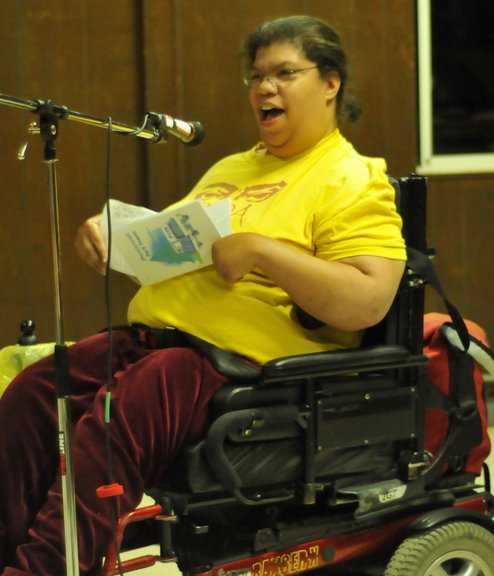 I realize I have been out for half of my life. Throughout the decades, I have met less than a dozen other non-closeted women of color with disabilities. Of those, only one was a fellow bisexual!

Prior to meeting Anita Cameron – a fellow black, activist woman wheelchair user – at my first ADAPT action at Atlanta in 1996, I thought I was alone in the universe with my multifaceted identities! I couldn’t have realized how much that week would alter the course of my destiny.

I knew something about resistance: like everyone in the Northeast U.S., I’d learned about Martin Luther King, Jr., in my elementary school class.

At 10, I’d obsessively watched the nightly news coverage of the rebellion at Gallaudet University, which is still “the world’s only university designed to be barrier-free for deaf and hard of hearing students.” It began when student outrage erupted over the appointment of a hearing woman who wasn’t even able to communicate in American Sign Language (ASL) as the school’s next president.The eight-day protest became known as “Deaf President Now” and led to the resignation of the original appointee and the selection of the first deaf president ever, I. King Jordan.

At 19, I was a classic left-leaning good girl. Until I went to Atlanta, I had never skipped a college class. Attending the action required missing four days of school.

I used my own low-limit credit card instead of my parents’ multiple-thousand-dollar one because I had no desire to be murdered. Therefore, I arrived in Georgia with $7 in my pocket, $23 of remaining credit, and knowing nearly no one.

I utilized the services of one of the awesome community-based personal care assistants (PCAs) – those fiercely awesome and rare people who helped everyone who needed helping, just because they did. They didn’t expect money from people who didn’t have it. This pit crew dragged us out of bed, dressed us, and put us in waiting wheelchairs.

They got up earlier than we did and fell asleep after the last of us went to bed, often at some unholy hour like 3 a.m., only to start the whole cycle over again at some equally God-forsaken hour the following morning. Many a PCA would arrive Saturday, leave Thursday – and be able to count the total number of hours of sleep hours logged as a single-digit number.

Additionally, most of them spent days marching alongside us chanting their voices hoarse and going to jail for justice, knowing that our struggle for the right to hire, fire, train, and schedule our own workers was inexorably tied to their struggle to keep jobs they loved with employers they had grown attached to and not to be told again and again and again that they needed to get “a real job.”

At the same time, they needed consumers to back them up in their real battles for things such as sick leave, living wages, and respect from a bureaucratic structure that benefitted from the widespread falsehood that PCA consumer rights and PCA worker rights were mutually exclusive.

It was a great privilege to assist people (many of whom had assisted me with intimate bodily care) as they found their own voices. I have watched friends go from not being able to whisper a grammatically correct sentence to being the absolute stars of press conferences attended by hundreds!

In Atlanta, assistance users mostly supported each other by handling what basic tasks we could among ourselves. This meant that the bodies of PCAs could be reserved for things that actually required a totally able body. Think: righting a tipped wheelchair; cramming your actual body into a door to prevent a freaked-out security guard from closing and locking it in an attempt to prevent an onrush of mostly wheelchair-using activists determined to find and confront whatever program, policy, or person we could. That day, the often-chanted slogan “Just like a nursing home, you can’t get out!” was about to be transformed into a rallying cry as close to their actual doors as we could get; and we would sneak onto the roof to banner drop.

I was empowered to realize I could manage for several more hours than I thought I could comfortably go between PCA shifts. As long as I had the right team assembled we could manage to get everyone’s needs met. Furthermore, under this paradigm I was an active participant in caregiving with my own obligations to others, not just a care recipient. It might take a little longer than usual and lead to a few barely-madeit-as-far-as-the-bathroom moments, but we could do it.

This was mutual aid on steroids. To illustrate: I could help feed someone lunch because my hands worked. A blind person with a strong back could assist me in the bathroom. This same person could receive sighted guide assistance from another activist who is cognitively impaired or mentally ill.

This mutual-aid-on-steroids tactic is what allowed the 504-person sit-in to occur. Taking place in 1973, this 28-day sit-in at the San Francisco federal building over the first piece of federal legislation to ever include protections for citizens with disabilities is still the longest in federal history.

Too few people today even know the event occurred. As with every other issue, the further you get from having white, able-bodied, heterosexual men as the main proponents of an issue, the more likely it is to be erased from the cultural knowledge base as a whole. My life’s work is combatting this forgetting. Join me, won’t you?

Martina Robinson is a Pennsylvania native who has resided in Massachusetts since 2000. A passionate poet and activist, most of her work lately has focused on not allowing theTrump’s administration to undo 17 years of positive social change.

Frame from the webcomic Upland

See this frame and two others in the article "The Boston Bisexual Women’s Network’s Brunches Have Achieved Comic Fame!", featured in this issue. Frame from the webcomic Upland, created by by Team Upland (Gabby Blonder, Jen Bonardi, Kate Estrop, Michael Monroe). You...

END_OF_DOCUMENT_TOKEN_TO_BE_REPLACED

By Robyn Ochs On Saturday, November 4th, New York’s LGBT Community Center honored Sara Ramirez with their Trailblazer Award at their 2017 Women’s Event. I include below my introduction and Sara’s entire speech. What she says is important, powerful, and fits in...

END_OF_DOCUMENT_TOKEN_TO_BE_REPLACED

By NekoFirefoxy All my life I’ve wanted things: things of material and immaterial worth, things I could easily achieve, and things that might be impossible to fulfill. The things I’ve wanted have changed with each stage of my life. Ever since I started a relationship...