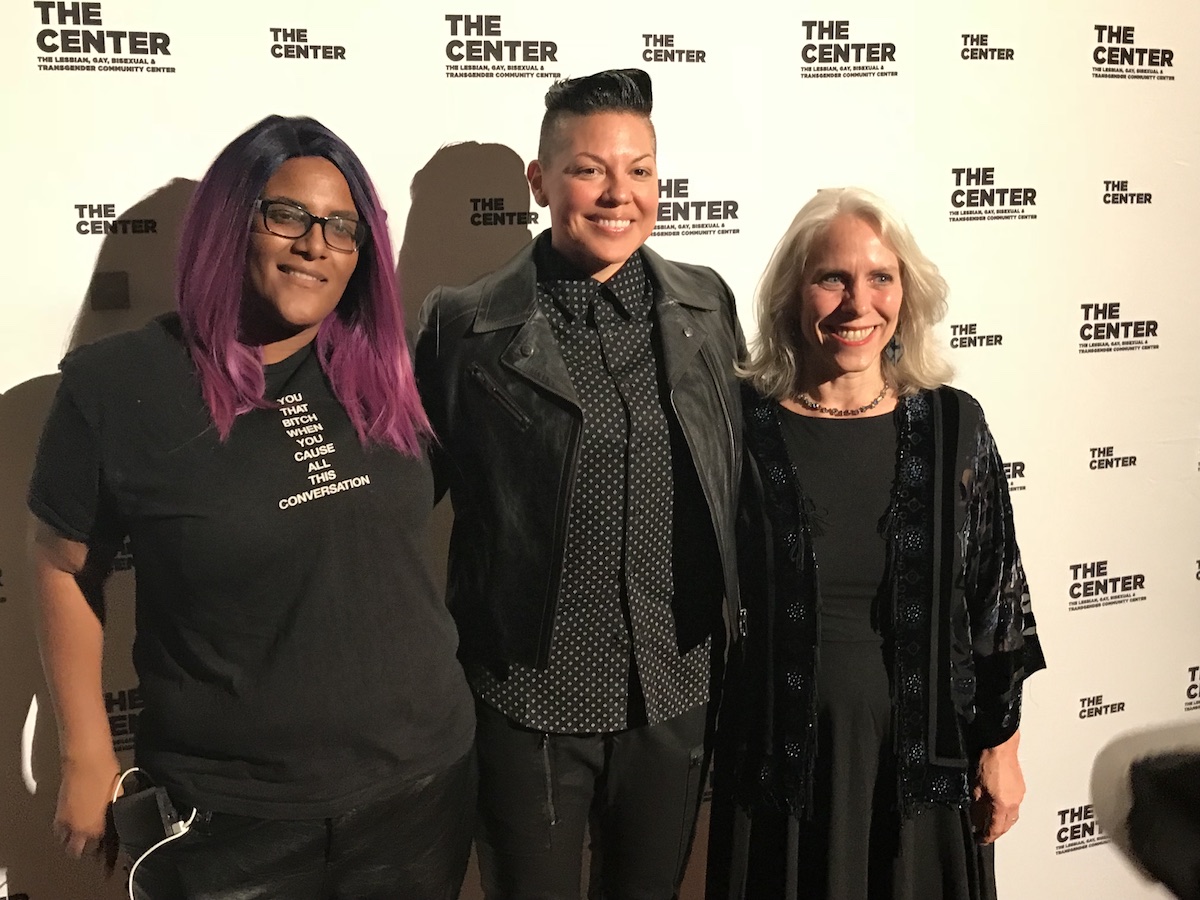 I include below my introduction and Sara’s entire speech. What she says is important, powerful, and fits in perfectly with the theme of this issue of Bi Women Quarterly: “What I Want.”

My name is Robyn Ochs, and I have identified as bisexual for 41 years, so far. When I came into my bisexual identity, all the way back in 1976, I had NO bisexual role models. Some of us in this room tonight are old enough to remember a time when there was not a single LGBT character on television. The Internet had yet to be invented, so I had no idea how to find information, validation, or community. I remember feeling lost, alone, impossible. My isolation was compounded by the fact that what did exist back then was an emerging gay and lesbian community. By which they meant, very specifically, gay and lesbian. Not bi. Not trans. The one place that could have felt like home to me was not welcoming.

Fast forward to 2017: While we still are not where we need to be, we have made significant progress. We have the Internet. “Gay and lesbian” has blossomed to LGBT, or LGBTQ+, and sometimes, at least, the inclusive acronym is heartfelt and sincere. And we are on television!

Speaking of television: On November 19th, Tony Award winner Sara Ramirez will join CBS’s hit drama, Madam Secretary, as a series regular playing political strategist Kat Sandoval. Earlier, for over a decade, Sara played orthopedic surgeon and out bisexual woman Dr. Callie Torres on ABC’s top-rated drama Grey’s Anatomy. This character – it should be noted – is one of very few unproblematic representations of bisexuality on television.

For the past 4 seasons, Sara has been the voice of Queen Miranda in the Disney Channel’s animated series, Sofia The First. She was seen on Broadway in the smash-hit Monty Python’s Spamalot as Lady of the Lake, for which she earned both a Tony Award for Best Performance by a Featured Actress in a Musical and an Outer Critics Award for Outstanding Featured Actress in a Musical.

Sara’s fame as a successful and Broadway actor provides her with an amplified voice. She has access to media. People listen to her.

And here’s what makes Sara special: she uses that voice to advocate for LGBTQ+ people. And even better: she uses the superpower her amplified voice provides to marshal resources for those in our community who are most marginalized: youth, people of color, the trans community, and bi+ folks. Sara shows up.

Thank you, Sara. From the bottom of my heart: THANK YOU. Thank you for being an activist. Thank you for being an out proud brave bold bisexual Latinx woman. It takes COURAGE to be out as bisexual. I may be a generation older than you, and I may be as out as it is possible to be, but your unapologetic embrace of your bi identity is a beacon and a possibility model for me, and for so many others.

It is my honor to present you with the Trailblazer Award from the NY LGBT Center for your tireless efforts raising awareness of the issues that affect our community such as LGBT youth homelessness. Your efforts to bring exposure and assist those working to end homelessness among LGBT youth is inspiring. In addition, you actively work to make sure that everyone in our community, regardless of gender identity, gender expression and sexual orientation, is empowered to live out and proud.

Thank you so much. It is such a privilege to share space with you all here tonight. Thank you for inviting me here. Thank you to the NY LGBT Center, Glennda and everyone who works and volunteers. This is a beautiful recognition and it means the world to me. Robyn Ochs, Faith Cheltenham, thank you from the bottom of my heart for all that you have done to center the bisexual-plus community and our histories, our needs and our beautiful stories. No trailblazer can trailblaze without standing on the shoulders of others who fought for our visibility. I thank you and all of the hard-working bisexual-plus community leaders, activists and allies for empowering me to stand here before you tonight and receive this honor.

At the same time, I must name the painful reality that while I am being honored for who I am and what I have done, there are so many LGBTQ institutions and spaces where I don’t feel seen or I don’t feel recognized as a bisexual, pansexual, queer, person of color. While my platform has given me important access, and I am so blessed to have the many privileges that I do, every time bisexual-plus people are erased – every time I am erased as a bisexual-plus, queer, person of color in the movement spaces that are supposed to be my home, the pain can feel unbearable. If I’m going to be recognized, you must also recognize my communities’ vulnerabilities and needs. Whether you’re comfortable with labels or not, the fact is that the ability to be seen, to name our truth, to find community, and build power around who we are, is such a critical part of any political movement for true liberation.

Now, recently at a conference focused on ending youth homelessness I had an experience that exemplifies this type of pain. I was in attendance as a representative of the Board of the Directors for the organization hosting the event, as well as to listen and learn.

After one panel, I was sitting at a table when I was approached by a white, gay-identified woman who eagerly wanted to get a picture with me for her wife. I told her I wasn’t doing pictures at that time. We started talking about the gay rights and gay pride work that she does. I am a curious person so I asked questions including questions about how people of color and bisexual-plus people were integrated into the work. She seemed uncomfortable. After some more awkward exchanges, the conversation ended naturally, and we went our separate ways. But hours later this same woman tracked me down to say, “I didn’t have my glasses on earlier but now I do and you’re not who I thought you were.” And with that she walked away. “You’re not who I thought you were.” I remember the words so clearly, because this exchange is a microcosm of how I often feel as a bisexual, pansexual, queer, woman of color in LGBTQ spaces. I am desired until I am inconvenient. I am useful until I am disruptive. And this is the experience not just of celebrities or others with platforms but the entire bisexual, pansexual, fluid, non-monosexual, queer-identified community – especially those of us whose lives intersect at multiple margins – those of us who are immigrants, poor, brown, black, disabled, asylum seekers AND bisexual, pansexual, fluid, queer, trans, and/or non-binary.

When I thought about what to say here tonight, I considered asking folks in this room who identify as bisexual, pansexual, fluid, or non-monosexual to identify themselves so we could see one another, celebrate one another, and maybe feel less alone. But the anticipation of almost no one standing up with me because so many of us don’t feel safe to, was too painful for me to risk. I have felt so vulnerable so often and no matter where I turn, there are so few resources for bisexual-plus people generally, and especially bisexual-plus people of color. We are suffering because we don’t have community. We are fractured and isolated.

And this experience – of not being seen or recognized or of being outright excluded with hostility – takes a toll. It is part of why we see such negative health outcomes for bisexual-plus people. It has been reported by the CDC that bisexual, pansexual, fluid individuals [including transidentified folks] have the highest rates of suicidality and depression among our LGBTQ community. In the most recent study published in 2016 by Heron Greenesmith, BiNet USA, Bisexual Organizing Project, Bisexual Resource Center, and MAP, it has been documented yet again that over 50% of the LGBTQ community identifies as bisexual, fluid, non-monosexual and yet we are often neglected and erased. There is rarely programming specific to our needs; rarely speakers, trainers and staff who are bi+ and can lead bi+ specific work.

But it is time for that to change – for us to see bi+ staff at large LGBTQ institutions, to see brown and black bisexual-plus people in top leadership positions, to have bi+ specific programming, to have clear easy access to culturally competent bi+ resources when going to LGBTQ orgs’ websites, to see signs up in your lobby that explicitly celebrate bi+ people, to direct funding to the bisexual-plus communities’ needs, to have leaders, whether they identify as bisexual-plus or not, name our identities and share our stories. Our needs are not identical to the needs of gay and lesbian individuals, and it’s ok. People who aren’t bisexual or pansexual or fluid will never understand what it means to be bisexual, pansexual or fluid. Respect our human dignity despite your lack of ability to understand us. Stop tokenizing bisexual-, pansexual-, fluid-identified cisgender, transgender and/or non-binary life experiences to further policies that don’t actually support our lives and experiences. Our stories and history are important and cannot be lost.

Tonight, I urge us to think about whether we have contributed to the erasure of bi+ people. Whether we have thought to ourselves, bisexual, pansexual, fluid people are really just straight or really just gay. Or any number of other insidious stereotypes. We can do so much together if we take a step back and reflect on the fears that may drive our discomfort, the assumptions that may cause us to exclude. We all do this and we can all work to change.

There is so much struggle right now but we are also at a critical juncture where movements are building – we are calling out the cultural normalization of sexual harassment, we are standing up and naming the importance of black lives and transgender lives. We are uniting on so many fronts. And we need to unite here too. We need to honor our bisexual-plus elders, fight for our bisexual-plus youth, and give space and voice to the entire bisexual-plus community.

I thank you again for this award, and I thank all of you for joining us here tonight. I know there are people in this room who don’t feel safe or comfortable to openly identify as bisexual, pansexual or fluid. I want you to know that despite this, I see you. I was you. I love you. And maybe in a couple of years, we will feel safe enough to show ourselves, and celebrate one another openly without fear. Thank you.

Robyn Ochs is the editor of BWQ.

Frame from the webcomic Upland

See this frame and two others in the article "The Boston Bisexual Women’s Network’s Brunches Have Achieved Comic Fame!", featured in this issue. Frame from the webcomic Upland, created by by Team Upland (Gabby Blonder, Jen Bonardi, Kate Estrop, Michael Monroe). You...

END_OF_DOCUMENT_TOKEN_TO_BE_REPLACED

By NekoFirefoxy All my life I’ve wanted things: things of material and immaterial worth, things I could easily achieve, and things that might be impossible to fulfill. The things I’ve wanted have changed with each stage of my life. Ever since I started a relationship...

END_OF_DOCUMENT_TOKEN_TO_BE_REPLACED

Editor’s Note: What I Want

Dear Reader, This issue’s theme is “What I Want.” Readers were asked: “Have you ever taken a moment to reflect on what you want – what you really want?” On this theme, we present poetry by Casey Lawrence, Jo-Anne Carlson, Courtney Carola, Samantha Pious, Jane Barnes,...