Some may consider me a “late-in-life bisexual” (although I disagree that it’s ever too “late” to come out or, to paraphrase actress Niecy Nash, “go into” yourself 1). Therefore, my life experience and education on how systems of power operate in our society resulted in me being fortunate enough to know that I would have to intentionally seek out positive and validating examples of bi+ sexualities.

When I realized I was bisexual in February of 2019, it would not be an understatement to say that Janelle Monáe’s album, Dirty Computer, became my soundtrack for most of the year. If I’m honest, I wasn’t really into Monáe’s music prior to this, but I always admired their fashion sense (those suits!) and their outspoken political views. However, after doing multiple searches for songs about bi+ sexuality, Monáe’s “Make Me Feel” kept popping up, so I felt like I should at least give it a try…and I did not regret it.

In the music video for the song, Monáe, accompanied by “bicon” Tessa Thompson, is enamored with Thompson and a man they meet at the club that the video is set in. One of my favorite scenes is when Monáe, who identifies as pansexual, dances back and forth between their two love/sexual interests while awash in the bisexual colors of blue, purple, and pink. Ultimately, they all come together, signifying that Monáe doesn’t have to limit their attraction to a single gender.

Another aspect of Monáe’s bi/pansexual representation that was important to me is how central Blackness is not just in this video but in their “emotion picture” for the album Dirty Computer. (If you haven’t seen it, I HIGHLY recommend watching it in its beautiful queer entirety on YouTube.) In a world that often attempts to render Black queer people as invisible or, within Black communities, to argue that Blackness and queerness are antithetical to one another, this is a subtle yet powerful move on Monáe’s part. For these reasons, seeing images of Black bi+ people specifically was necessary for me and gave me much needed sustenance.

Towards the end of the Dirty Computer “emotion picture,” there is a scene on a beach where Monáe, Thompson, and the anonymous guy from the bar are on the beach at sunset, expressing their love and appreciation for each other in tender embraces and laughter while an instrumental version of Monáe’s song “Don’t Judge Me” plays in the background. There is so much happening in this brief simple scene: Black joy, tenderness and love; polyamory; bisexuality; the primacy of connecting with other humans and with nature. In the lyrical version of the song, Monáe speaks to being authentic to themselves despite society’s prohibitions: “Let’s reintroduce ourselves / From a free point of view / If I’m gon’ sin, it’s with you / Tattoo your love on my heart / Let the rumors be true.” This is a bold and beautiful expression from Monáe, a femme person operating in a world that associates Black femininity with wantonness and polyamory, and bisexuality with promiscuity. Monáe has continued to try to live in their authenticity by recently coming out as non-binary. In an interview with The Los Angeles Times, Monáe said “My pronouns are free-ass motherf*cker and they/them, her/she.” I luxuriate in the fact that I am seeing more and more people—especially people of color—living their lives openly as queer people. In my attempt to live as a “free-ass motherf*cker” like Monáe, these people serve as support and reminders to people like me that bi+ people have always been here and fight to always continue to be.

Marya Mtshali (she/her) is a sociologist and postdoctoral researcher at the Harvard Kennedy School. Originally from South Carolina, she now resides in Boston with her dog Tesla and her two cats, LuLu and Jax. 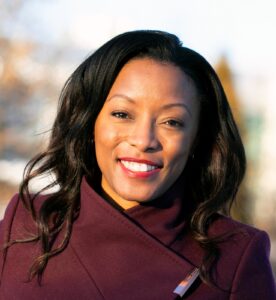