This conversation between Robyn Ochs and members of Frente Bissexual Brasileira was conducted in May 2022.

You are leaders of Frente Bissexual Brasileira, which appears to be doing quite a lot. Please tell us about your organization.

The Frente Bissexual Brasileira (Brazilian Bisexual Front) is a collaborative national network made up of collectives and activists focused on the articulation of a Brazilian bisexual movement. It was created at a virtual meeting of bisexual collectives and independent activists from different regions of the country held on June 28, 2020, to celebrate International LGBT Pride Day. This event was promoted by COMBI, a collective of bisexual woman and nonbinary people from Santa Catarina, a state in the south of Brazil.

Frente Bissexual Brasileira aims to strengthen and disseminate the bisexual and monodissident (people who are physically and/or emotionally attracted to more than one gender) agenda throughout the country. It facilitates joint bisexual activism and communication about bisexual activist efforts taking place at the local and regional level throughout Brazil.

Since September 2021, we have been part of the National LGBTI Popular Council, a civil society initiative that currently brings together 25 national organizations that work to defend the rights of the LGBTI+ population. We are present on the social networks Twitter, Facebook, Instagram, and YouTube: linktr.ee/frentebissexualbrasiliera. We also have a website that documents some of our work and other relevant information.

What is the legal and cultural situation for LGBTQ+ people in Brazil?

It’s a complex situation here in Brazil, as we don’t have any legislation that prohibits being LGBTQ+, yet LGBTphobia is a structural part of our current society. Our country has the highest murder rate of trans people in the world and the highest murder rate of LGBTQ+ people in the Americas. These murder rates are outrageous and demonstrate the seriousness of LGBTphobia as a social policy. In 2021, we had at least 140 murders of trans people, 135 of which were travestis (a Latin American trans identity) and transgender women (ANTRA, 2022). According to data from the Unified Health System (SUS), released in 2020, every hour another person is assaulted in Brazil due to their sexual orientation or gender identity.

Despite our constitution stating that all people are equal and cannot be discriminated against, there are few provisions that protect our community. However, the LGBTQ+ community has had some judicial victories such as the recognition of the right to equal marriage and changes allowing trans people to change their name and gender in the civil registry, allowing LGBTphobic acts to be prosecuted under anti-racism law until specific LGBTQ+ protections are passed, and eliminating the restrictions against bisexual and homosexual men donating blood to third parties. Most such decisions have taken place in the last four years.

Yet, there is a lot of resistance against bisexual, lesbian, gay, trans, and intersex people in our country.

What words are used to describe lesbian, gay, bi,–– or non-heterosexual people in Brazil?  Are these words equivalent to their English counterparts, or do they have a different meaning?

We have equivalent translations for lesbian, bisexual, and homosexual. The word gay is used for homosexual men. To include other multisexual identities, we use non-monosexual and the Brazilian term monodissident (monodissidente in Brazilian Portuguese).

In Brazil we also have derogatory word Gilete used to describe people that have relationships with men and woman, the word refers to the razor blade brand that became a synonym to the object. The expression suggests that the person “cuts to both sides,” like the razor blade. Using that word is not as common anymore, as bisexual people are tending towards a definition of bisexuality that includes nonbinary people, moving away from binarism.

Bisexual invisibility is a reality in the LGBTI+ community. We have always been present in the community, but little is recorded in this regard, as these bi activists are not remembered as bisexual. Their identities were assimilated as homosexuals, and today LGBTI+ groups rarely specifically address bisexualities.

What specific actions has Frente Bissexual Brasileira led and participated in?

Our first public action was Festival Bi+, an online cultural festival made by bisexual people to celebrate Bi Visibility Day 2020, which we held on September 26 of that year. This gathering of bisexuals from different parts of the country further inspired us to connect our struggles, and FBB grew stronger. In addition to organizing Festival Bi+ the following year, we have also brought conversations about the diversities of bisexual people, as we consider it essential to reflect on how social oppressions operate together. Our actions to date have all been virtual due to the pandemic. We are striving for a  national reach, using our social networks and our YouTube channel.

We also collaborate with other organizations to work on different fronts that include and expand beyond promoting bisexual visibility and disrupting LGBTphobic violence. Brazil has a great LGBT+ history.

Several organizations make up our work on different fronts. In 2017, for example, the exhibition Queermuseum was presented to the public for the first time, bringing together works on gender expression and identity, diversity, and difference in Brazilian art. The exhibition caused a furor due to the onslaught of conservative groups to censor artistic content and was even canceled by the museum. A great battle ensued for freedom of expression and the arts. The following year, there was a new opening of the exhibition in another state. The exhibition shows that our lives as LGBT+ people are much greater than our struggles, that our history can become a pulse of life in many spaces. We as an organization are very inspired by those kinds of actions in which we can celebrate our lives.

As activists/advocates, of which accomplishments are you particularly proud?

The daily construction of this space of acceptance and national articulation that is the Frente Bissexual Brasileira, and which represents a true milestone in our country with regard to the fight for rights and bisexual pride, is in itself an achievement that fills us with pride.

More concretely, we can mention the construction and release of the BRAZILIAN BISEXUAL MANIFESTO, where we were able to reflect our perspective, our claims, and what the Brazilian bisexual movement protests; also the establishment of the NATIONAL DAY OF BISEXUAL PRIDE, which we have celebrated since 2021 on September 26, in reference to the first edition of Festival BI+ (held on 09/26/2020), thus celebrating a date imbued with its own meanings that dialogue with the contemporary Brazilian bisexual movement.

We are also proud of our recognition as subjects of the LGBTI+ community with our own voices and experiences. We perceive state and regional discrepancies that we need to resolve and a strengthening of the bisexual movement as a whole from this exchange. Another great victory that emerged independently, but included people involved with the FBB, was discussion of the mental health of the bi population and the professional practice of psychology, which which reverberated in the specific resolution n. 08/2022 on the work of the Federal Council of Psychology. There are many specificities involving bisexuals in mental health and this agenda has been ignored. Having managed to raise the importance of the issue and finding allies to build this resolution and make it a reality in Brazil was an achievement that does not end here. Therefore, we are also building a Free Conference on Mental Health aimed at bringing to the national stage of the National Conference on Mental Health guidelines that consider our particularities, in order to promote an antibiphobic mental health policy.

We have also been dialoguing and claiming space within the national LGBTI+ movement. In 2021 we joined the National LGBTI Popular Council, the organizing committee of the National Seminar on Lesbians and Bisexual Women (SENALESBI), we helped in the construction of the LGBTQIA+ Seminar of the National Congress, and, in partnership with researchers from inside and outside the FBB, we are building the first national survey on bisexual people in Brazil, currently in the fundraising phase.

Are you in contact with bi activists in other countries? How did you come into contact with bi+ activists, bi+ books, bi+ websites, etc. outside Brazil? Do you see a value in transnational activism? If so, what is the value?

We believe in the importance of organization and mutual strengthening between bisexual people and activists, for the achievement of rights, visibility, and acceptance. In this sense, we believe that the wider this network is, the stronger our community will be. To work towards this, we are building a mapping of networks of bisexual activists in Latin America and other countries to contact and share the BRAZILIAN BISEXUAL MANIFESTO, which is now available in Spanish and English versions, in addition to the original Portuguese language. We have already had the opportunity to dialogue with fellow activists from Germany, through an article we wrote and which was published in Bijou (German Bisexual Journal). In addition, members usually represent FBB at Bi+ world meetings, in order to expand our international contacts. We wish for more dialogue with other bisexual people around the globe.

What else do you want people to know? Any last words?

We would like to thank you for the opportunity to be featured in Bi Women Quarterly! 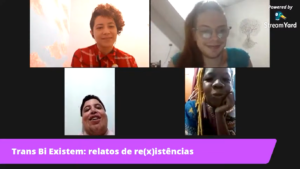 from a livestream called “Trans bi exist: report of resistances”