I used to be the person who loathed tradition. The idea was too ancient in nature—repeating the exact same activity for the sake of other people having done so for, like, a really long time? Has no one even heard of innovation, expansion, or enhancements in life? Tradition felt like clinging to the past in an unhealthy way, and there was no chance I felt willing to partake in such. I did enough of that as it was with personal traumas. Perhaps it allowed me comfort and a level of self-control in conquering repetition.

A story I stumbled across solidified my stance in traditions. In summary, the story stated that a traditional family recipe for a baked ham called to cut off the ends of the ham. A man asked his wife why she cut off the ends, and she replied that every woman before her had done so and she needed to follow the recipe. Upon further investigation, it was discovered that the original recipe required this removal of meat to fit the meal in the oven, as the oven was too small for a larger ham at the time. The tradition turned out to have been carried on for a wasteful purpose.

The ham story became my crutch in explaining my distaste for family traditions. For years, no one questioned my feelings on the matter, just chuckled at my defiance. “Dani’s always been that way. She has to defy things.”

Defiance of traditions concluded in the form of falling in love. Not just getting into a relationship, but really falling in love. I fell in love so completely I still can’t believe my heart knows how to feel this way.

Meeting my partner changed my perspective on how I viewed the world. The dullness of repetitive society had a new shine to it; strongly formed opinions were challenged to new levels of thinking. I was introduced to philosophical, critical thinking in ways that made my brain flip-flop on everything I ever thought I knew. This, in turn, ended up applying to my stance on traditions, and it happened by complete accident.

Our first Halloween, he was lamenting over the days in his past when he had the time, resources, and ability to create haunted houses and extensive yard attractions for his favorite holiday (which, coincidentally, is my favorite as well). In short, he was bummed out to the max, and my heart was heavy for his distress. To cheer him up, I wrote him a Halloween poem (featured below).

It worked! The poem helped lift his mood.

Some days later, I was completely surprised by artwork to accompany the poem I wrote for him. He’s an artist, and he said that reading my words inspired artwork to highlight how he felt about it.

The next year, I asked him to do it again because I had so much fun the year before. A writer and her artist partner pairing up for a word and image combo that’s personal to our affections for Halloween? That was the coolest thing I had ever done in a relationship. ‘Lo and behold, by year three, I was forced to confess: we had a couples’ tradition, and I loved it.

I faced the reality that my mind was changed, and I did my best not to feel like a giant hypocrite. Upon further reflection, I began to understand what my problem with traditions actually was, with this as my ultimate and comfortable conclusion: I was so stuck on one definition of the word “tradition” I didn’t realize its potential for being something more than mindless repetition.

A tradition doesn’t have to be something that was done for years before. Traditions can be whatever you want, last however long you want, and compose themselves of any elements you see fit. Traditions can be altered to accompany changes in life and remain traditions. They can be something that brings you more love, more happiness, and more comfort. Consistency is a nicer way to think about it than calling it repetitive.

Interestingly enough, this translates into coming to terms with ourselves as bi+ women as well—most of us have been stuck feeling like we may be greedy, indecisive, or attention seekers because others have defined us as such, but that definition of who we are doesn’t have to apply (not like it’s even a correct definition anyway, but we all know how people can be). Bi+ women and traditions don’t have to have negative tones to their definitions. All you need is love to change that perspective.

Dani Banani (Danielle) is a Hoosier-raised woman living in colorful Colorado with her partner and their four children. She has a passion for the Scarlet Witch, Skyrim, and spends most of her time writing. 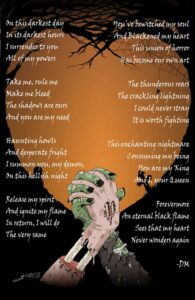