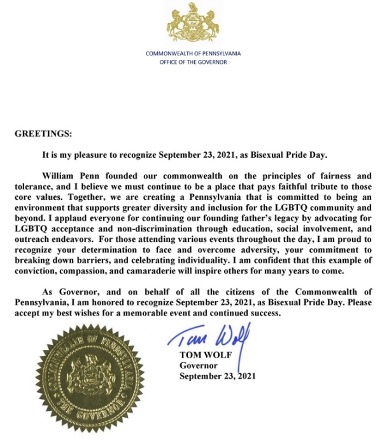 This year (2021) something extraordinary was done, which could (and hopefully will) be the start of a new tradition associated with bisexuality. Namely, Governor Tom Wolf of Pennsylvania became the first American governor to issue a statement recognizing Bisexual Pride Day.

I hope this statement by Governor Tom Wolf will be the start of a new tradition of more governors issuing statements and proclamations recognizing Bisexual Pride Day, because the bisexual community still needs visibility, and it’s easier than you might think to request a statement or proclamation from the governor of the state where you live—just email them.