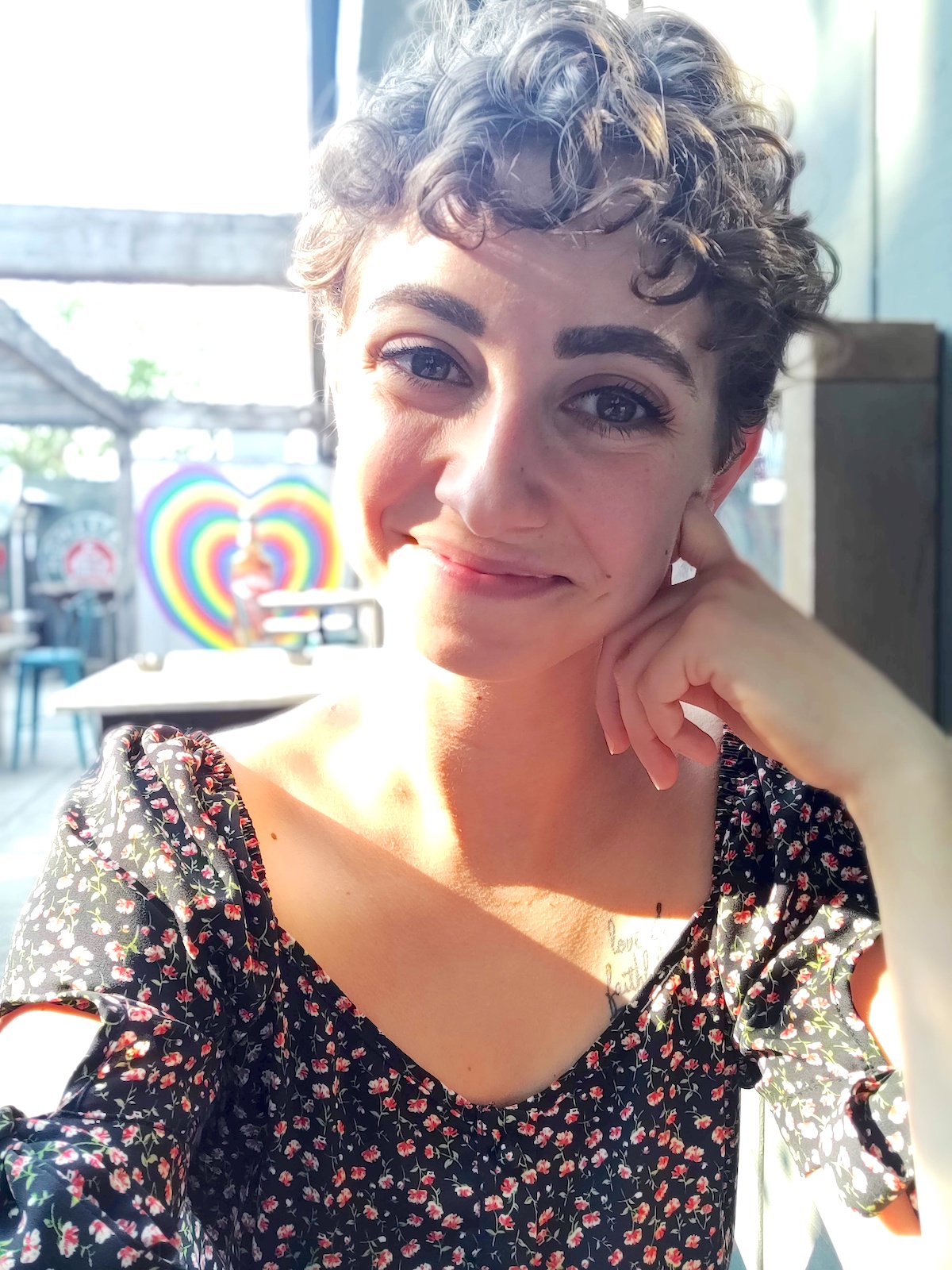 We’re at Goodale Park for the Columbus Pride celebration. Beautiful people are all around us. It is rainbows and smiles, music and queer joy.

When we walked into the park, Edwin said, “Why am I smiling so much? I just started smiling when we got here, and I can’t stop.” I told him it’s because there’s so much love here.

Vivi comes over to the tree, wisps of hair falling out of her ponytail. She snuggles up to me and says she wants a balloon animal. I have no idea where to find the balloon animals in the maze of vendors nearby. As grateful as I am for Pride, the rainbow capitalism is annoying as fuck. I do not care if T-Mobile has rainbow phone cases for sale at their booth, and I’m not willing to walk through dozens of booths to find the one making balloon dogs that will undoubtedly pop before the end of the day.

Edwin walks toward us and says he’s a little dizzy from the spinning. I suggest we get french fries, mostly to distract Vivi from the balloon animals. She sprints towards a path lined with food trucks. We get two big buckets of fries. Edwin’s is plain and Vivi’s is smothered in ketchup. I sample from both. I notice that Vivi is staring at someone nearby. They have orange and yellow hair, and their makeup is colorful and intricate.

“I love her hair. She’s so pretty.” Vivi doesn’t take her eyes off of them.

She nods. “Will you come with me?

I hold her hand and we walk over to the colorful person.

“Thank you!” They beam at Vivi. “You’re so sweet and beautiful!”

Vivi smiles, and her little hands cover her mouth in pure delight. We say goodbye and go back to our french fries. She keeps staring at the person until they leave, absolutely infatuated. I smile to myself because it’s maybe the first time I’ve seen one of my kids totally smitten. It’s cute and sweet and lovely.

Part of me is still surprised that I’m here, at Pride with my kids. I’m thirty-one years old, a divorced mother of two. I was raised to believe that it’s a sin to be anything other than straight, that one’s sexuality is a “choice.” I practiced abstinence and married my high school boyfriend. I endured an abusive marriage for years before I finally gathered the courage to end it. The faith I was raised in taught me that I was worthless, and my ex-husband confirmed that. I’ve fought like hell to heal from that trauma and create a joyful, abundant life for myself. I’m openly bi and polyamorous. I have three wonderful partners. I have created a family that loves and supports me and my kids. I am safe, happy, and healing.

I don’t speak to my parents anymore. I told them I couldn’t be in contact with them unless they could tell me they don’t believe I’m going to hell for being bi. They said it isn’t fair to ask that of them because I’m the one who changed. But I don’t think it’s fair to expect me to be around people who believe who I am is sinful and wrong. If your child tells you your beliefs hurt them and endanger their very existence, why wouldn’t you change?

I look down at my babies. Vivi is sad that her pretty friend is gone; Edwin obliviously talks about whale sharks. I wonder how I could ever choose shitty, bigoted beliefs over them. They are beautiful and precious and perfect. They will never hear that they are unworthy of love. Not if I can help it.

Vivi is all for it. Edwin groans but smiles anyway. Someone close by sees me struggling with selfie mode and offers to take the picture. “Cheeeeeese!” we all say.

“Let me see; let me see!” Vivi says. I show her the picture. We’re all in our Pride shirts. Theirs say, “Everyone Welcome” in rainbow colors. Mine says, “Greedy Bisexual,” because I might as well own it. I have boob sweat—it’s toasty and I refuse to wear a bra. Vivi and Edwin’s smiles are bright and genuine. “Let’s go back to the playground!” they say.

I tell him that I am, and that I’m so happy to be here with him and Vivi. “It’s healing,” I say. My voice catches and tears fill my eyes. The kids get concerned but then realize it’s just Mama being Mama. They hug me, then run back to the swing and the slide. I watch as they squeal and laugh, and I think about how lucky we are to have each other and how far we’ve come. Pride, indeed.

Skylar Camp lives in Columbus, Ohio, with her two young kids, her partner, and their fuzzy kitty. She writes creative nonfiction that focuses on deconverting from Evangelical Christianity, trauma, divorce, polyamory, parenting, and more.