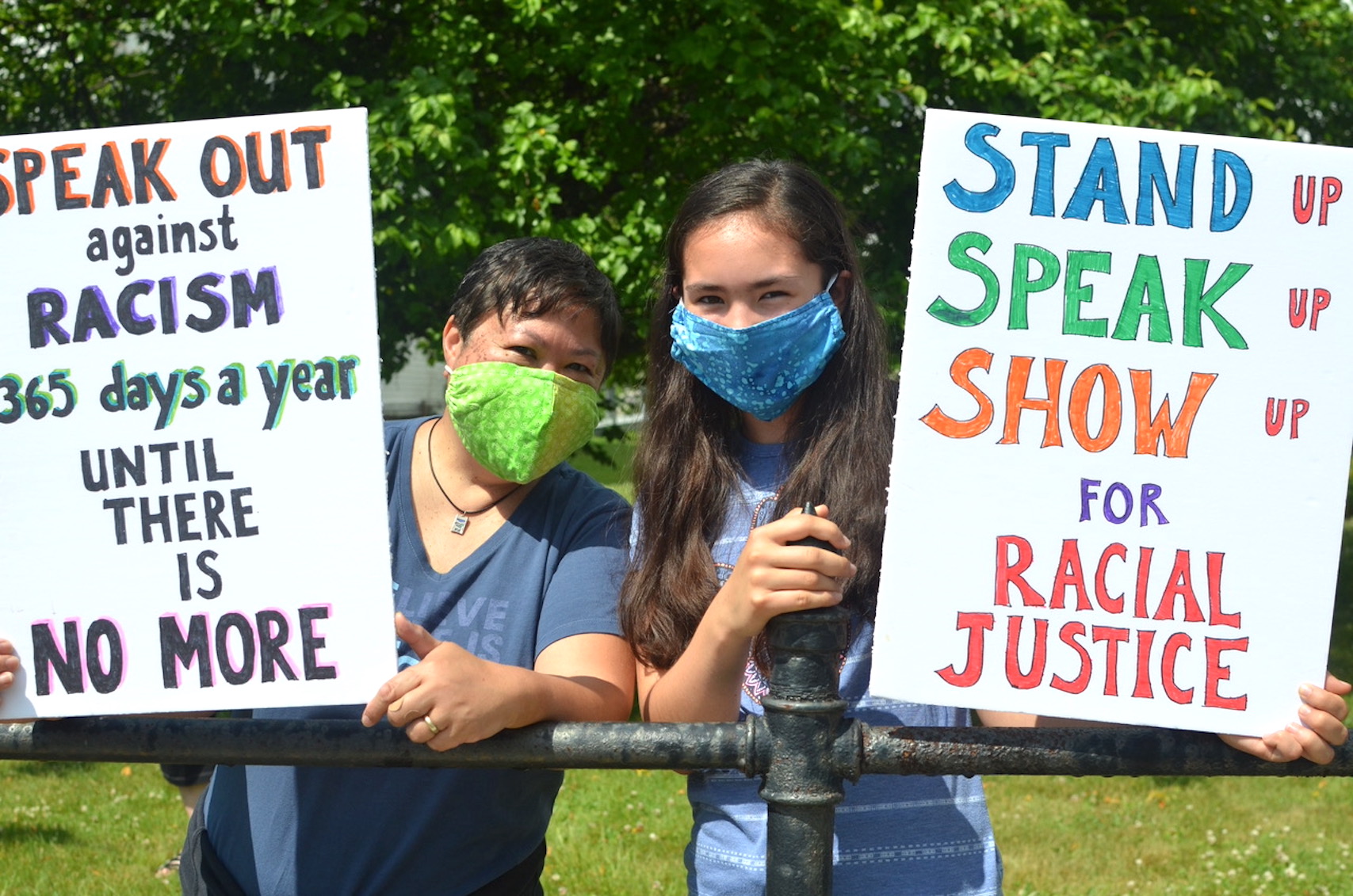 By Carla Imperial and Kai Imperial-Jewett

I think the question on every parent’s mind is, “Am I doing this right?”

I know that my parents did the best they could with what they had to work with. Right before my dad passed away, he confided in me that he had never heard his father tell him that he loved him. And that once, when he was a boy during WWII, he walked with his father for over ten miles in the jungle to get to a place where they could get supplies, and his dad didn’t say a word to him the entire time. It’s no wonder that I never heard my dad tell me that he loved me until the day my mom died. From that point on, he ended our phone conversations with, “Love you, darling.”

In our household, saying, “I love you,” is as common as saying, “Thank you!” and “How you doin’?” When we’re out and about, I hear our 14-year-old daughter, Kai, say, “Thank you so much,” without fail, or “You okay?” when she hears a loud crash from the other room (typically me, walking into something), or I see her run to open the door for a disabled person, and I think, “Check. Done that right.”

But there are so many things that we, as parents, don’t have a roadmap for. There are challenges we never saw coming with our kids, and suddenly, we find ourselves lost and terrified that we might get it completely wrong and wreck our kids for life. Fortunately, during those times, I lean on values instilled from my parents to act as my compass: having faith, trusting my intuition, knowing that mistakes and imperfection are okay, remembering forgiveness (to others and myself), and doing the best that we can. And so far, with those “tools” in our back pockets, my wife, Megan, and I have managed to work through every hard spell with our kid. And she, Kai, continues to blow us away with her perseverance and heart.

Like most people from my generation, the law of the land when it came to coming out was, “Don’t.” Period. “Just don’t.” The signs were everywhere. So, when I had my first strong feelings for other girls, of course I had to suppress them. For so long. I shudder to think of how that affected my entire wellbeing. I don’t blame my parents for not being “woke.” They were Filipino immigrants with a strong Christian background. They knew no other option. So, it was up to me to forge my own path, and eventually I found the courage to embrace every part of me. For me, being bi made everything more confusing. If I like guys, how can I like girls? Like, duh. Of course. Bisexuality. Ever hear of it? Now, it seems silly to think that I was so confused. But, again, the signs saying, “One Way Only,” were everywhere.

We can be the sign-makers for the next generation.

These lyrics from Dar William’s brilliant song, “You’re Aging Well” say it all:

Why is it that as we grow older and stronger
The road signs point us adrift and make us afraid
Saying “You never can win,” “Watch your back,” “Where’s your husband?”
Oh, I don’t like the signs that the sign makers made.

So I’m going to steal out with my paint and brushes
I’ll change the directions, I’ll hit every street
It’s the Tinseltown scandal, the Robin Hood vandal
She goes out and steals the king’s English
And in the morning you wake up and the signs point to you

Since Kai was very young, we have brought her to so many rallies and protests, to show her that we can be the change. And I’ve been known to make a sign or two for these events. 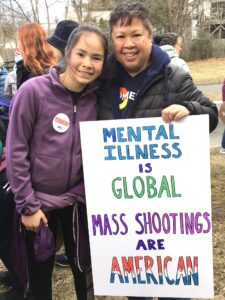 This past June, I organized a special Pride service for our church, with the theme, “Free to be Me.” I asked several members of our congregation to share a reflection on what that phrase meant to them. We had an amazing panel, ranging from a 50-year-old trans woman to a 14-year-old pan, cisgender girl, who happened to be our daughter. I asked Kai if I could share the words that she wrote and delivered to our congregation.

Hello everyone! It’s so nice to see you all on this beautiful day! Happy Pride Month! My name is Kai Imperial-Jewett and I identify as a pansexual, cisgender female.

I am what most of my friends would consider “straight passing.” I wear skirts instead of flannels and I have long hair instead of a short cut. Of course, I love this about myself and know it doesn’t make me any less pan. Buuuuuutttt, when I came out to my friends as bi (at the time) they were all so surprised! I’d always been the “token straight friend,” as we call it at JFGay Middle School. So other than the shock value, this was all that my coming out story amounted to:

Friend: Who are you dating? Please say it isn’t Isaac or Jasper!

And I had it SO easy coming out to my family! Having two queer moms, there wasn’t any assumption of who I’d be! They had asked me what I identified as when a friend started transitioning, and I said straight. But when I started questioning, I told my parents without hesitation. It was something I wanted to share with them as I was figuring myself out. I was comfortable coming out to my extended family too, since my moms had already tested the waters, per se.

When I started to identify as pan, it was even easier. Since I’d realized I could like non-guys, I had been having celebrity crushes all over the gender spectrum. Still, I only considered I could be pan when my girlfriend changed her pronouns from she/her to she/they. I knew that even if she identified as they/them or anything else, it wouldn’t affect the way I felt. I knew that I didn’t care about gender when we started dating and I still didn’t.

But this time, unlike when I came out as bi, there wasn’t an internal struggle to hang on to being straight. Back then, when I had started crushing on a girl, I kept wondering if I really liked girls, or if I still liked guys, or if it was all a weird psychological phase. It’s not a time I want to go back to! But when I began to think I was pan, I didn’t fight the idea. I wasn’t stuck on a fixed idea of my sexuality, and it made it so much easier!

Between when I first came out and now I have definitely experienced discrimination and homophobia. But overall, I know if I tell someone I’m pan, they’ll most likely respect it and won’t think of me any differently. Overall, I’m free to be me.

I know it hasn’t always been this way, though. My parents and other amazing mentors have taught me about the long struggle for queer acceptance. From the Stonewall Riots and the first Pride march, to the ACT UP AIDS fight, to when same-sex marriage was finally legalized in 2014 (of which my moms were on the frontlines, and were one of the first same-sex couples in the nation to be legally wed!)—I’m inspired by and grateful for all the brave folx who fought to get us here. I do my best to say their names and continue their work.

But we must remember progress is not linear. For the young trans community, things aren’t getting better. They’re getting worse. Anti-trans laws are suppressing kids’ rights to basic self-expression and bodily autonomy. Along with limiting trans students’ athletic participation and trying to make teachers only use students’ legal names, these laws criminalize providing trans-affirming medical care to minors. They force kids to go through puberty that will only increase the gender dysphoria between their bodies and their minds. And if their parents support them and help them get treatment, they risk being investigated for child abuse and having their kids taken away.

Let that sink in. Supportive parents being investigated for child abuse. Just looking at the trans kids in my school I can see how much having parents that support you reduces the likelihood of depression, anxiety, and self-harm when transitioning. Taking that away would be catastrophic for their mental health. More than that, these laws are going after trans kids’ lives. Attempted suicide rates for trans people are already more than 40%, compared to the general population’s 5%. These laws target gender-affirming healthcare and an accepting home—things that are scientifically proven to bring rates down. Quoting an article by my cousin Em, a teenager, trans woman, and activist: “Attempts to limit these supports will not result in fewer trans kids; they will only result in fewer living trans kids.”

These laws may only be in the south, but the transphobic attitudes ripple across the country, to tragic effects. In our school, trans kids have been harassed in hallways, misgendered, dead-named, and called slurs. In Ludlow, two families are suing the middle school for basically supporting their trans kids at school who weren’t out to them yet. And last March, a trans student at Smith Vocational committed suicide.

All of these things have shaken my trans friends’ mental health, leaving them exhausted, depressed, angry, and terrified. Because these aren’t “don’t say gay” bills from 10 states away—these are chilling reminders that hatred is happening right here too. In our own state, our own town, our own school.

Being surrounded by all this discrimination and intolerance, this Pride Month is bittersweet. Even though I am pan, I understand that being cis and living in a place where I can speak my truth gives me privilege in the LGBTQ+ community. And I need to use my privilege and my voice now more than ever. I need to speak up, stand up, and show up for the queer and trans community. I need to acknowledge how far we’ve come while continuing to pave the way for the next generation. I need to celebrate my freedom while fighting for theirs, and never stop fighting until we are all free to be.

I hadn’t heard Kai’s speech until she delivered it to the congregation. There are moments in a parent’s life when it’s clear as day that we’re doing something right. That was one of them.

Carla Imperial is a writer, playwright, and musician, living in the Pioneer Valley with her amazing wife of 23 years+, Megan Jewett, and their badass daughter, Kai. 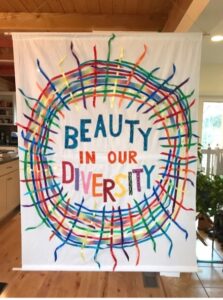 A banner Carla made to hang in their church sanctuary.

END_OF_DOCUMENT_TOKEN_TO_BE_REPLACED

Around the World: Anonymous, from EAST AFRICA