Never Had They Ever, Until… 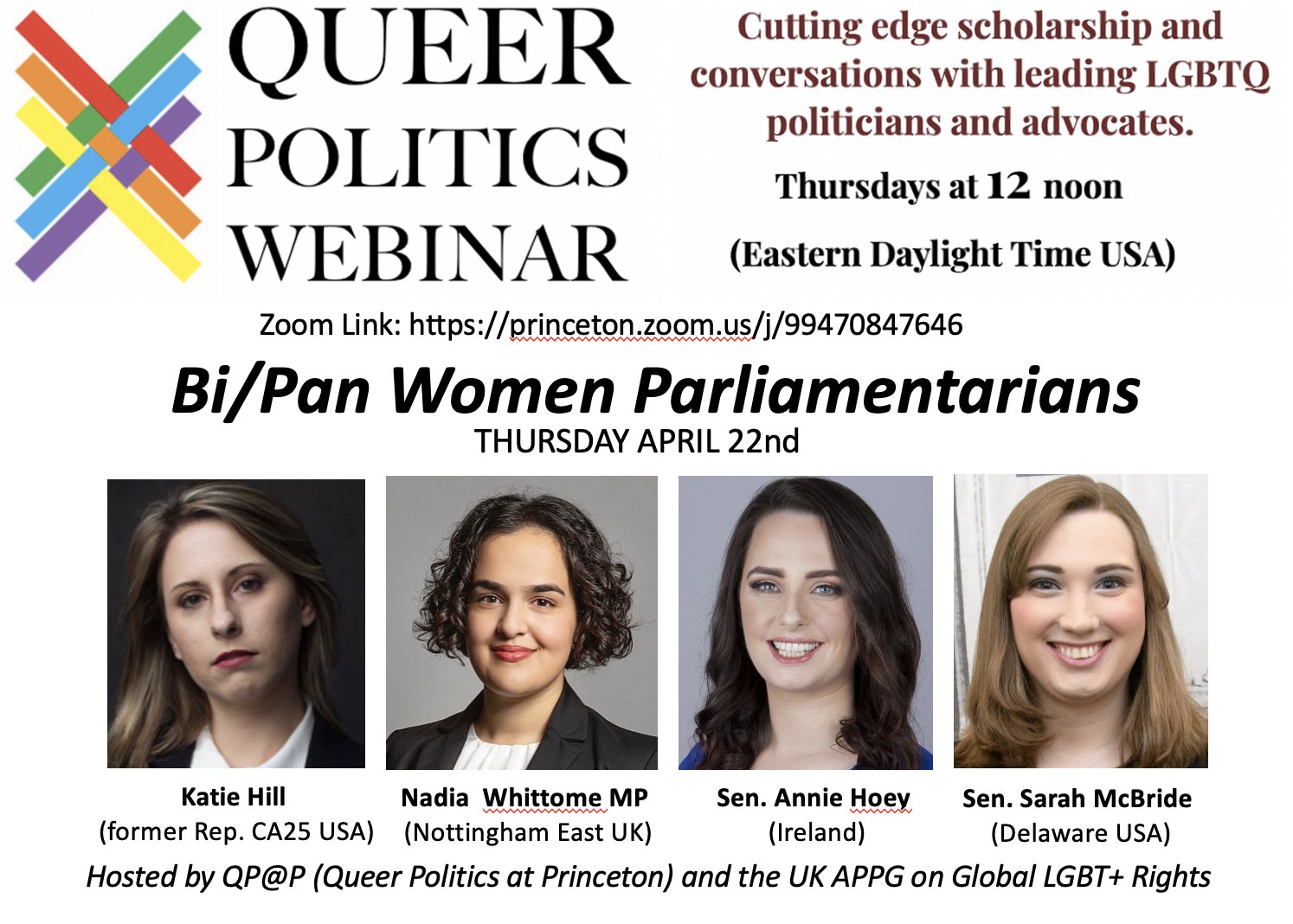 On Thursday, April 22nd, the Queer Politics Webinar hosted a panel on Bi/Pan Women Parliamentarians moderated by Andy Reynolds, Senior Research Scholar at Princeton University’s School of Public and International Affairs. This program was part of a series co-sponsored by QP@P (Queer Politics at Princeton) and the UK All-Party Parliamentary Group on Global LGBT+ Rights.

The conversation was lively and covered issues including heterosexism, bi erasure, being a role model to youth, and navigating identity.

Katie Hill (she/her), who was partnered with a man while in office, discussed heterosexual assumptions that were made about her. While running for office, she consulted with other LGBTQ+ leaders, specifically a few lesbians with long-time involvement in politics, and they advised her not to come out because she was running in a conservative California district that had voted against marriage equality in 2008 by a 2-1 margin. She summed up their argument: “Why would you do that? There’s no reason to. You don’t need to.” She chose to come out anyway, making the case that “Doing so is what it made it possible for other queer people to feel it’s possible to run, too.” She said she found herself explaining what bisexuality was to “a lot of wealthy women in their sixties, seventies, and eighties who simply had not been exposed to it before.” As a member of the House Equality Caucus, she was sometimes left off the list of Caucus members. People would forget she was a part of the LGBTQ+ community. “We’re still often overlooked,” she said.

Sarah McBride (she/her), who identifies both as queer, bi+, and as trans, started off by noting that she has been on hundreds of panels focused around LGBTQ+ equality, and this was the first time in her entire career she’d ever been included for her sexual orientation, not her gender identity. “The interplay between the two is that one completely eclipses the other.” She says this is something she thinks about daily. “Every time I am thinking about engaging in a conversation about relationships, anytime I’m engaging in any kind of conversation about my social life with colleagues, I always wonder if this added information is just going to blow their minds? It’s so hard for so many people … to wrap their brains around my gender identity, that when I throw in that I’m a member of the bi+ community, I can see their heads almost literally exploding. It’s a difficult dynamic to navigate.” She said she is always hesitant to bring in her sexual orientation or the fact that she is a sexual assault survivor because she can see it confuses people. Annie Hoey (sí, i), the first out bi person elected to the Irish Parliament and only the second out LGBTQ+ person, described having to work very hard to remind people si’s part of the LGBTQ+ community. Si says, “I’m always very aware of the joke, ‘How do you know if someone’s bisexual? They tell you.’” Similar to Katie Hill, Hoey provides an example of people forgetting she’s part of the LGBTQ community. Sí feels it is important that bi+ people—when they choose a partner—aren’t pushed into a monosexual identity, and that that young people see someone who is LGBTQ, who clarifies their pronouns, and who will bring up LGBTQ+ issues on a regular basis.

Nadia Whittome (she/her) started off by saying, “I never consider it coming out just because someone discovers something about me. I was never in.” She said her queerness is integral to her identity as a woman of color, and  discussed the challenges of being part of a smaller Asian community in Nottingham East, which is unlike London or New York. Her district has more conservative forces that can make it hard to come out. But she said, “When I thought about the people who don’t have the privilege I have—as someone with a huge platform—I thought it’s absolutely my duty to be here as my full self.” She said that being a queer person and a person of color, there’s quite a small constituency of people with whom you can sometimes feel completely safe. She makes the case that we are marginalized in different ways and we have to come together to unite and stand with each other in our different struggles: “The class war and the culture war are one and the same and we have to fight both of them together.”

One might ask, why does it matter that bi+ people hold elected office? Sarah McBride answers this brilliantly: “Representation itself doesn’t achieve change. But in order to address the multitude of challenges we’re facing, at minimum we need a diversity of voices at the table.”

After the webinar, I reached out to convener Andy Reynolds and asked him what inspired him to organize this panel. He replied, “As an out bi man myself, I think we would do well to pay much more attention to the emergence of a bisexual/pansexual community that is now, by far, the largest part of the LGBTQ+ community but largely invisible. The political and policy implications of identifying as bi are huge, but we know very little about the issue.”

Andy generously provided me with a list of national legislators around the world he has compiled, that includes 22 out bi+ people in nine countries, 13 of whom presently hold office. Of these, there have been a total of 16 bi+ women, 11 of whom are in office today.

A recording of this panel can be found on YouTube: https://youtu.be/s62n6L2ZW5o.

Robyn Ochs is the editor of Bi Women Quarterly.

OUT BI+ STATE OR NATIONAL
LEGISLATORS/PARLIAMENTARIANS