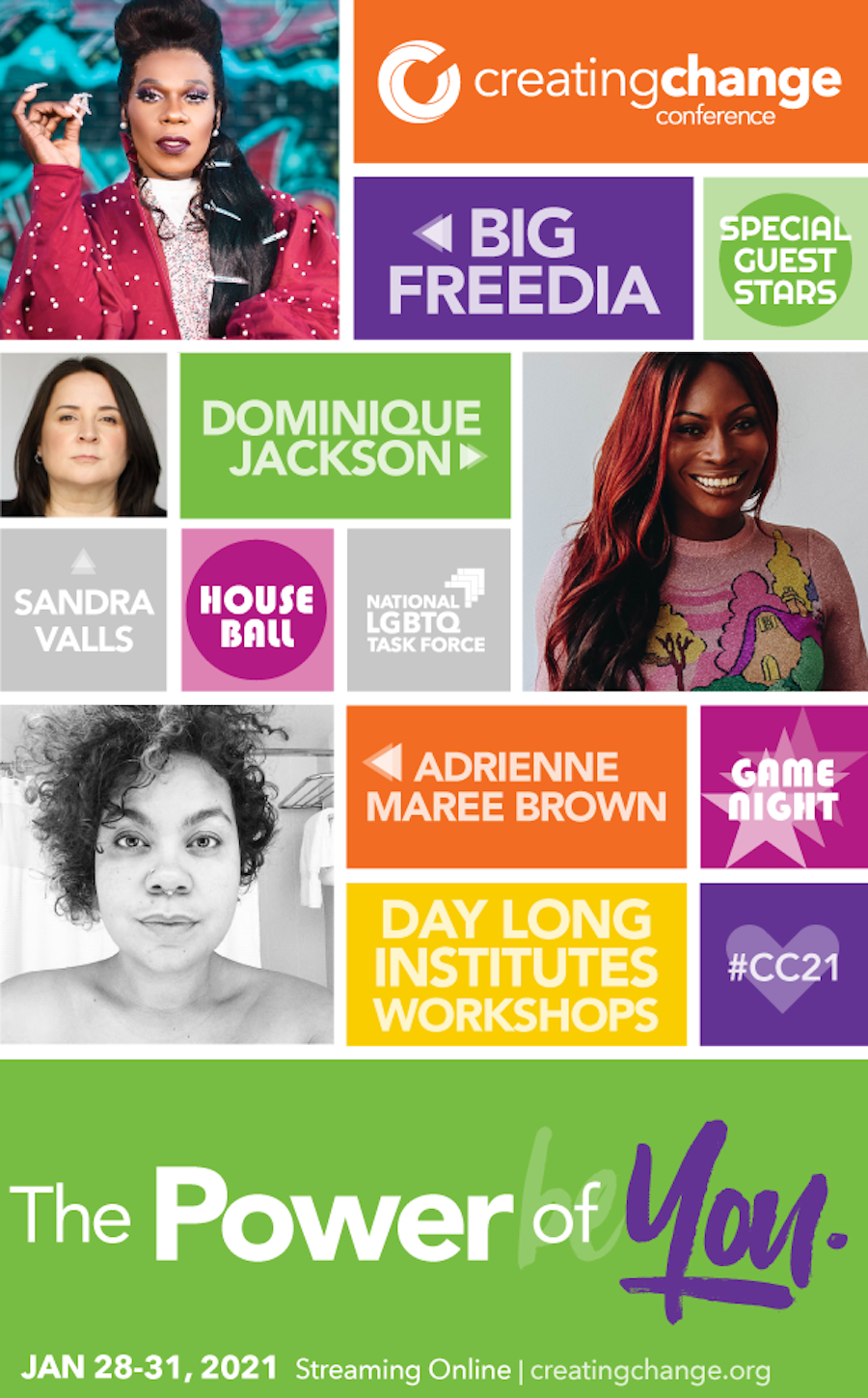 When I went to my first Creating Change Conference in 2018, I was almost overwhelmed by the amount of bi+ representation and community. While that conference was in-person, the virtual 2021 conference had much of the same impact for many of the attendees.

When I was asked to help run the Bi+ Caucus, and later the Bi+ Institute, I really had no expectations. I mean, a virtual Creating Change? Looking back on my time in Washington, D.C. in 2018, much of what I enjoyed about the conference was the social interaction outside of the workshops and institutes. Virtually, those events wouldn’t have the same effect, or produce as much of a sense of community and networking—or so I thought.

I logged into Zoom the day of the conference and, as the “room” was opened, I was pleasantly surprised. Bisexual people had come out in force to take part in the Institute, and, later, the Bi+ Caucuses. For many of us it seemed like we were somewhat instant friends and, if given the opportunity, could have kept talking for hours. The hours spent listening to Robyn Ochs, and Institute and Caucus participants. Ping-ponging ideas during quick breakout sessions caused me to feel like I had gone back in time for a moment; back to the days of consciousness-raising sessions.

I was invisible to myself for a long time. I believed that loving one gender precluded me from loving others. Society has a way of teaching us to be simpler, tidier than we could every possibly be. It loves to presume that we are always on one side of a binary just waiting to decide. When I finally began to see myself, a new sense of freedom emerged. Yet, I felt like an imposter in every world I was in. Too “straight” for the queer world. Too queer for the straight world. I kept falling into traps of attempting to ensure that who I was palatable for everyone around me. I laughed off biphobic comments on dates, or worse, believed them. I attempted to split and mold myself into multiple people so that I could exist in palatably in multiple boxes.

What a breath of magic it was to find myself in a place where I could just be and belong and belong as I am. The Bi+ Caucus at Creating Change offered to me the rare gift of feeling seen in my wholeness, in community with others who know what it is to live in the ‘Both And.’

Emilyn is not alone in finding a sense of kinship at Creating Change. Another attendee of the conference shared sentiments similar to Emilyn’s, commenting that CC ‘21 gave them a sense of “homecoming.” Alice Erickson goes on to describe her experience with the Bi+ Institute specifically, discussing trauma and religious barriers in her testimony.

Attending the Creating Change bi+ institute was like coming home to my community and myself. I felt present and connected, reflected in the expansive language, statistics, and stories that were shared. As someone coming back to myself in my 40s—negotiating trauma recovery and religious deconstruction, redefining my queerness and re-engaging with the LGBTQ+ activist community for the first time in over 18 years—I felt at home in the virtual conference rooms, at home in my skin and very much less alone. I began to truly believe that I have a home in the LGBTQ+ community. I realized that I can share my story with others or choose to keep it close.

I understood that I get to define my identity, that I am queer enough. In seeing others, I felt seen. In listening to others, I felt heard. By gathering with other bi+ individuals I realized that I am not alone and that I deserve a supportive community in which to thrive.

Avery Staker also discusses the struggles with religion and how Creating Change has helped her continue her path of self-love and true religious community. In her testimonial, they discuss how the Unity Church session reminded them that religion was “not meant to be oppressive and hateful” and how if religions can pull from each other, “why shouldn’t we as individuals?”

I have known about my identities for as long as I can remember. As a kid, I didn’t think anything of it. I thought everyone felt the same way as me—no boxes, no labels, just love. Unfortunately, I grew up in a Catholic community that quickly made me realize that not everyone thought that way. My relationship with religion has been broken ever since.

Coming into Creating Change, I had repaired a little bit of that relationship through religious friends and learning about the true meaning of religion. I attended the session with Unity Church hoping to connect with my community on their relationships with religion. What I got was something so much more than that. Talking with the leaders of Unity helped me realize that I can believe in higher power, that religion was not meant to be oppressive and hateful. My perspective became so enlightened when we discussed reclaiming religion and spirituality as a means to give ourselves hope. Now, I have regular discussions with my friends on religion and our bond has grown so much closer. I learn and adopt beliefs from them and vice versa. Creating Change taught me that there does not need to be a line between religions and other systems of belief—they all feed and learn from each other, so why shouldn’t we as individuals?

The experience was truly something I could not have expected. Breakout rooms were filled with laughter and the scheduling prowess of the Task Force’s volunteers helped every timeline stay tightly met. People traded everything in the chat rooms anyone could have wished for: contact information, continued reading, and direct links to the statistical source material being discussed. The event was truly a feat of virtual connection, academic and real-life source sharing, and it allowed all individuals to contribute in ways that made them feel comfortable; talkers talked, lurkers lurked, and texters kept the real-time chats updated and lively.

Creating Change 2021 truly proved to be a weekend about finding ourselves and finding the parts of ourselves we had lost: religion, community, self-love, even simply the ability to confidently define who we are. It may have just been a simple virtual conference, but it gave those that were able to participate so much more than a weekend’s worth of informational classes could provide—it gave them a new hope.

However, I did not walk away completely content or filled with the same invigorated sense of hope that my fellow conference-goers got to experience. Throughout the branch-out sessions and the second caucus, I expressed this feeling or interacted with those who felt the same as myself. The LGBTQ+ Task Force went to so much effort to make this virtual conference accessible, yet in my eyes they slightly missed the mark—in such a way that I believe the feeling of community so many others delighted in might not have had the full impact the conference tries so hard to achieve year after year.

ESL and ASL interpretation continued to act as a barrier for our own community members this year, with multiple attendees commenting on spotty translations and attendees not speaking in ways that held those that were deaf and hard of hearing in mind. These barriers are avoidable with a simple introductory run down of accessible speech and can be handled by constant reminders to everyone that slow speech with clear distinction of who is speaking is best. While the Task Force does provide a slew of interpreters for those in the Hard of Hearing and Deaf communities, as well as those requiring ESL interpretation, faults in these interpretations remain that limited accessibility for many.

The fact of the matter is the disabled bisexual community (and all it intersects with) largely does not have consistent accessibility to large LGBTQ+ events. The largest barriers for events like these are travel costs (planes, trains, automobiles, and housing), so taking those variables out was a step towards making  this conference more attainable for a large group of multisexuals; a group that makes up a majority of the LGBT+ community yet shows up in lower numbers at events and community gatherings. An event with lower costs, easier acces for those in wheelchairs or with disabilities that making roaming hotel lobbies difficult—it was a dream. A dream, unless you ended up in a room where little attention was paid to the needs of those requiring interpretation.

Ultimately, I’m so pleased by the showing of the community that I did have the opportunity to see. My only hope going forward is that more individuals have the chance to experience what Emilyn experienced as that “rare gift” of being one with a community that often seems stuck on the outskirts, what Alice described as “coming home,” and what Avery described as enlightening—community expression, love, fellowship, and translation efforts.

Miles Joyner is a South Carolinian Bi+ educator and activist, as well as a writer and southern historian. While their focus is on the bi+ community, they also advocate for nonbinary education and expression. They can be reached through their email, milesjoynerk@gmail.com or through their various social media accounts as Miles Joyner or Miles the Bisexual.

Emilyn Kowalksi is a writer, facilitator, and multi-disciplinary advocate for social transformation and collective liberation. Emilyn can be reached on Instagram: @Emilynwithan_N and Love_Notes_For_Liberation.

Avery Staker is currently a college student from Iowa obtaining a major in Journalism and Mass Comm, as well as a minor in Sociology and Gender Studies. They love astrology and personality tests. 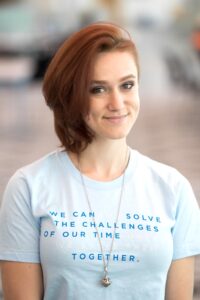 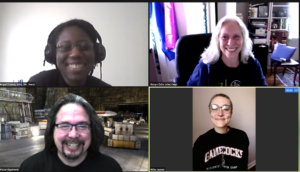 END_OF_DOCUMENT_TOKEN_TO_BE_REPLACED

By Nest Valorfixer When I was young, a lady flirted with me and my then-boyfriend. I remember it seemed like having sex with her would be easy to slip into. We were all curious, but we hesitated, and then that mood didn’t occur again. We were afraid, and then things...