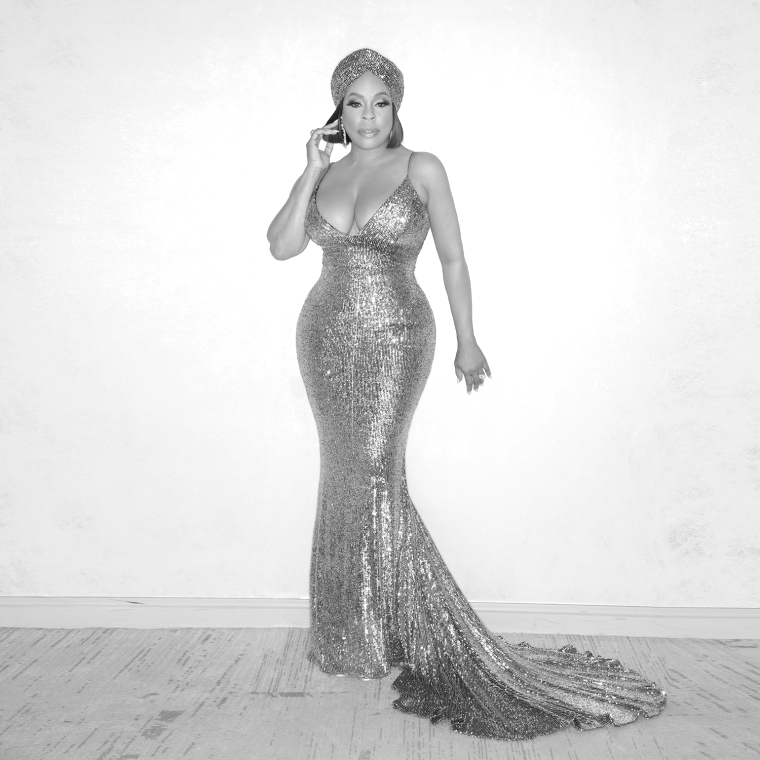 Jada Pinkett-Smith: “Is she the first woman?”

Jada: “So you’ve never been attracted to women in your life?”

For over 25 years, actress Niecy Nash has hosted and acted in dozens of shows from Reno 911 to Claws. But not even her role as Dr. Jamie Ryan in Never Have I Ever could have prepared her for a second act like this. After marriages to and divorces from two men, Niecy surprised her friends, family, and fans by marrying soul singer Jessica Betts.
As the Smith women gathered around the series’ eponymous red table, Niecy joined them and revealed the real scandal: “I’m going to say to this everybody who’s been in the community or is community-adjacent: I haven’t gotten a welcome packet.” Somebody light up the bisexual bat signal because we gotta answer the call!

Sweet Niecy, the bi+ crowd was waiting to see how you chose to identify before sending you a tri-color bi pride flag and a “visiBIlity” button. I see now that we were remiss in delivering a prompt and warm embrace. But I disagree that you don’t know what you’re doing. When a woman says, “I gave myself permission to feel what I felt in the moment and to be unapologetic about it,” that woman is doing everything right. On Red Table Talk, you told us: “A lot of people said at the beginning, Niecy Nash has finally come out. And I said, ‘Well, come out of where?’ Because I wasn’t in anywhere, I wasn’t leading a sexually repressed life… I mean, I liked [men]. I liked ’em real good!” So many bi+ people have had to explain this same thing. We look forward to commiserating with you on how such a simple concept is, inexplicably, so difficult for some to grasp.

“The other thing I think is harder for people is when you don’t fit in the box we put you in,” you said wisely. Bi+ folks can sure relate to this. We’re not on either end of the sexuality spectrum, a limbo that makes society nervous. This is why the identities that fall under the bi+ umbrella (e.g., pansexual, omnisexual, fluid, et al.) are referred to as the middle sexualities.

Your youngest daughter was so kind to try to help you navigate these and other labels. You sped through them: “binary, non-binary, cisgender, this thing, bah bah bah, butcher, baker, candlestick maker.” You know, you’re right, these are confusing. But you don’t need a sexuality label to understand who you are. The no-label label works just fine in the bi+ universe.

I think your chosen term—free—is beautiful and fits nicely under the bi+ umbrella, if you don’t mind me saying so. More than anything, I want a bumper sticker with the new name for our entire community: LGBTQ+Niecy! You instinctively knew that the plus was there for you to hang your hat. Live in that plus, Niecy. It’s where we thrive.

And it’s where we’ll be sending the welcome packet.

*Red Table Talk is an American talk show hosted by Jada Pinkett Smith, her mother and her daughter. All quotes are from this interview.