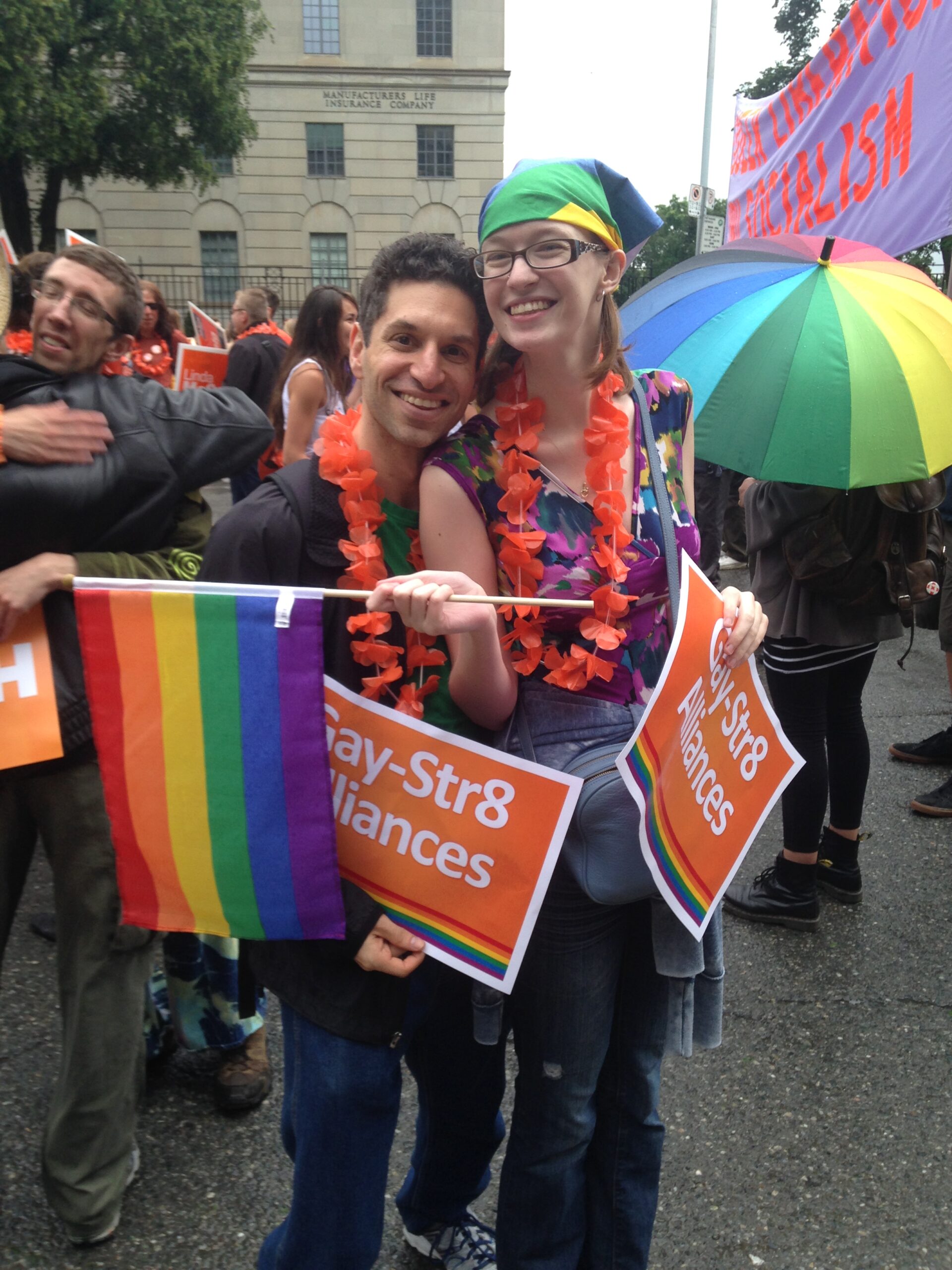 “See? I told you there’d be other straight people here!”

A young woman is pointing to me and my partner. She’s holding her boyfriend’s hand; he looks extremely uncomfortable. I’m pretty sure Steve doesn’t notice. He’s too busy sticking rainbow stickers on my clothes, and it is very loud, after all.

It’s my first Pride Parade as an out bisexual. I’ve been to one other parade, when I was sixteen. I went with my lesbian-identified best friend, and I was wearing a “Str8 Against H8” t-shirt. I was an ally. I hadn’t yet figured out that I, too, should be wearing rainbows. But now I know better. I’m bisexual and proud of it.

Hearing an ally telling her boyfriend that there were “other straight people” at Pride hurt in a way I wasn’t expecting it to. Going to Pride as half of a seemingly “heterosexual” couple, I knew we were going to get looks. It isn’t the first time it’s happened to me. At the Pride group at my school, I am frequently called an ally – despite all my efforts to correct people. It shouldn’t bother me anymore that people see me with Steve and make an assumption of straightness. It’s only natural, right?

But it still hurts. We aren’t in a heterosexual relationship because neither of us is heterosexual. The assumption of straightness based on the way I dress or who I’m with hurts.

(And then I feel guilty for these thoughts, because being with Steve means that I’m not afraid to kiss him or hold his hand anywhere else. No one will yell slurs at us on the streets. No one will gay-bash us. Our presumed straightness is a privilege everywhere else. Just not here.)

Marching my way down Bloor Street later, I can’t get it out of my head. I’m holding an orange National Democratic Party sign that reads “Gay Straight Alliances” – do people think I’m straight? Steve is holding one that reads “Ban Conversion Therapy,” having traded his GSA sign to an actual straight ally.

I’m angry, but I keep smiling. What else can I do? I holler, I sing, I stamp. It’s raining, but everyone is laughing. Pride is supposed to feel this way. I high-five a guy I knew in high school who I see in the crowd. I wasn’t out in high school. Does he think I’m straight?

There’s this weird thing that happens when bisexual women partner with men. Suddenly, no matter how often you tell people you’re bisexual, the assumption of straightness follows you. You start worrying that people aren’t going to think your identity is valid anymore. People have been telling you to pick a side, and now they think that you have done just that. I suppose when you’re partnered with a woman, there’s an assumption of gayness: but somehow, that hurts less, because at least I’d still be recognized as queer.

When I see a couple on the street, I have to stop myself from making assumptions. Just because they appear “straight” doesn’t mean that they are. One or both could be bisexual, pansexual, or asexual. One or both could be trans, genderqueer, agender or Two Spirit. You can’t look at someone and know for certain whether they’re a part of the LGBT community. If more people checked their assumptions at the door, the world would be a much safer place. I still make assumptions. But knowing how much it hurts to be assumed-straight-until-proven-otherwise… I’m trying to stop making an ass out of you and me.

Casey Lawrence is a 20-year-old Canadian university student completing an undergraduate degree in English Language and Literature. She is a published author of LGBT Young Adult fiction through Harmony Ink Press and has been actively involved in LGBT activism in her community since she co-founded the Gay-Straight Alliance at her high school.

END_OF_DOCUMENT_TOKEN_TO_BE_REPLACED

From the Editors: Partnering With Men