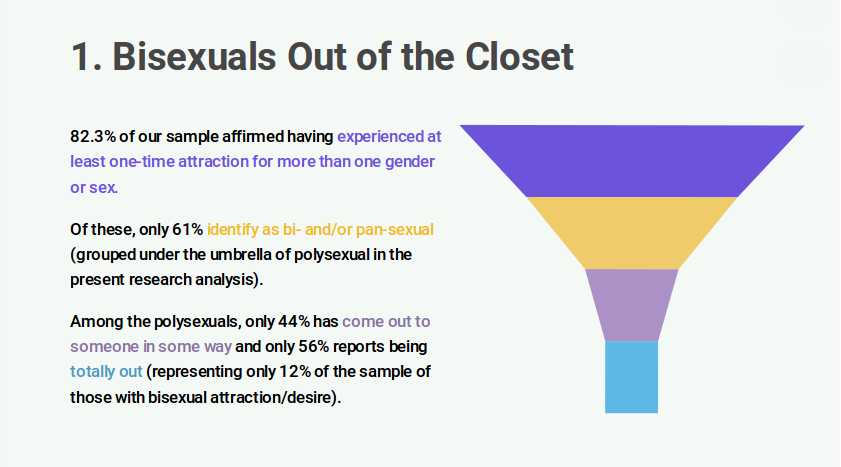 This column is under the capable supervision of Renate Baumgartner and Soudeh Rad. Renate Baumgartner is currently researching bisexual women and their experiences of discrimination in Vienna, Austria. She holds a Ph.D. in natural sciences, is a bi+ activist, and offers workshops for bisexual empowerment. Soudeh Rad is an Iranian gender-equality activist based in France and cofounder of Dojensgara.org, a website about bisexuality in Persian. Some columns will be written by Renate, some by Soudeh – and some by both. If there is research on bisexuality that you would like them to be aware of, please write to them c/o biwomeneditor@gmail.com.

Mondo Bisex, themselves bi activists with various LGBT+ identities, sought to find out how people with diverse identities under the bisexual umbrella experience coming out, discrimination, and health conditions, using a hybrid and multidisciplinary approach.

Mondo Bisex’s goal for the pilot research was to “inform, sensitize, educate, and collect the first data on bisexual health awareness.” They recruited more than 650 respondents by simply sharing an online survey in various social media groups and spaces.

Two psychologists with expertise in psychometrics donated their time to analyze the results, and found relevant data regarding bi coming out, discrimination against bisexuals in LGBT+ communities, suicidal ideation, and much more.

Mondo Bisex plans to conduct further analyses as they receive funding for the research project.

82.3% of the respondents affirm having experienced attraction for more than one gender or sex at least once. Among these, only 61% claimed an identity under the bisexual umbrella, grouped and termed as “polysexual” for this study. Among self-identified polysexuals, only 44% had come out to anyone, and only 56% reported being completely out. Therefore, only 12% of the overall sample who indicated attraction for more than one gender was completely out.

Discrimination Against Bisexuals in LGBT+ Communities

Among polysexuals who indicated that they had participated in LGBT+ events and activities, almost half declared they had experienced some sort of erasure, discrimination, derision, and/or stigmatization at these events. Approximately 40% of respondents had never heard of an event dedicated to bisexuality.

Discrimination While Out as Bi

You can read a full report of the initial findings (in Italian) from Mondo Bisex’s study here: https://infogram.com/f7673d90-b105-4449-8018-76ef23b6202b. Thanks to Vera Di Santo from Mondo Bisex for working with us on this report, and for sharing her infographic.

The Research Corner Is Back!

After a hiatus, we are bringing back the Research Corner to Bi Women Quarterly. We are looking forward to using this section to overview current academic research on all things bi+, such as mental and physical health, wellness, culture, advocacy, and more. We see this...

END_OF_DOCUMENT_TOKEN_TO_BE_REPLACED

By Daphne Hermsen For many bi+ people globally, communities in which they feel safe and understood are nonexistent or hard to find. However, over time, growing local and international bi+ communities have started to emerge. You can see bi+ organizations and...

END_OF_DOCUMENT_TOKEN_TO_BE_REPLACED

Interview with Miranda Schreiber: Improving Health Care for Bisexual+ and Other 2SLGBTQIA+ Individuals Through Better Training of Medical Practitioners

By Nicola Koper Miranda Schreiber (2021), along with four colleagues from the University of Toronto and McGill University, recently published a call to action in the Canadian Medical Association Journal, arguing for improved training of medical practitioners across...