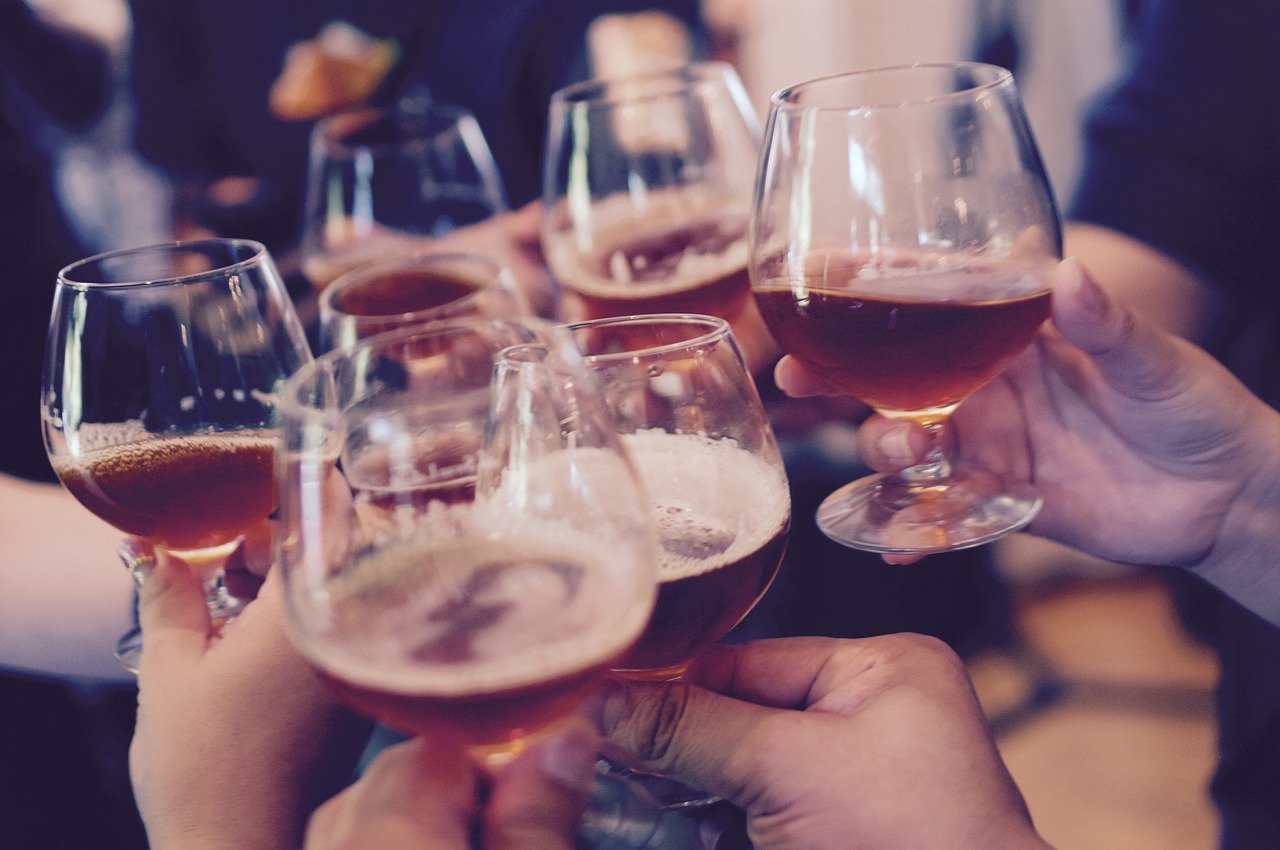 For the past ten minutes, Nell had been staring at the tiny bar in the corner of the reception hall. It wasn’t the bartender she watched, as he was not really her type: bearded, balding, yet sporting a sandy blond ponytail down the back of his black vest. She instead kept an eye on the glass fishbowl on the bar. Each guest deposited some amount of money, though from the seat at the table where she and Karen had been assigned, Nell couldn’t tell how much. Was it a tip, or did the bartender forgo a cashbox? Picturing the wrinkled five dollar bill in her wallet, Nell didn’t have the energy to navigate the logistics. Of course, a drink would have made it easier.

Nell felt the seat next to her shift, and Karen set down a plate of hors d’oeuvres on the table. Karen eased back in the plastic folding chair and crunched on a piece of celery. “Getting a drink?”

Nell turned to her, shrugging, and picked a carrot off the plate. “Think her family sprang for an open bar?”

“If they did, that’s where they spent the money they should have spent on fresher food,” Karen said, examining the other half of her celery stalk.

Rolling her eyes, Nell stood. “You want anything?”

Nell approached the bartender carefully, trying to act confident that she knew how to work things. “Two white wines, please.”

The bartender, who seemed younger up close, smiled and looked Nell straight-on as he responded, “You got it.” The crinkles in the corners of his eyes (seriously ice-blue) were kind, and Nell found herself smiling back.

Flushed, she avoided his gaze and realized she now had an unencumbered view of the fishbowl, which was full of ones. Nell fished her wallet out of her jacket. “Do you have change?”

He shrugged, pointing at the bowl with his corkscrew, “No cash. Just that.”

Ears now burning, she deposited the bill in the bowl, muttering that it wasn’t a problem, and took the wine glasses from him.

“Carry it over for next time,” he said, and she nodded, relieved, returning to the table as fast as she could without spilling.

“Did you have cash?” Karen asked before Nell had even settled back in her seat.

“Obviously.” She set the glasses down a little too roughly and wine slopped over the side.

“Well, you never carry cash. I just wanted to make sure.”

They sat in silence for a moment, Nell a little embarrassed for snapping, dabbing up the spill. Upon noticing that the clump of guests around the hors d’oeuvres table had started to thin, Nell got up to get herself something. But Karen stopped her, a hand on her arm.

“Can you sit with me for a minute? I don’t know a soul here.”

Nell decided it wasn’t in the best interest of their relationship to point out that it had been Karen who insisted they come watch Nell’s ex-husband get re-married, and wasn’t it so sweet for him to include her on the invitation too? Instead, Nell settled back in her chair, reaching for something else from Karen’s plate.

“It was a nice ceremony,” Nell said, trying to find the carrot with the least vegetable dip.

“How did it compare?”

“It didn’t. We got married in the courthouse.”

The wine felt warm going down, and Nell gulped a little too much with each drink. Her gaze drifted back to the bartender with the nice smile, and she thought she could just barely make out the five in the fishbowl, waiting to be spent.

“You think they’re scandalized you’re here with a woman?” Karen asked, pushing a mini-quiche around the plate with a carrot stick.

Though Nell had been on the lookout all evening for whispers behind cupped hands and quick glances away, she knew no one was surprised. She had left Troy on the pretense that she was only attracted to women now, something that seemed much easier to explain than her interest in everyone but him. It had gone well – so well, in fact, that there were whole nights Nell lay on the pullout couch in the living room, forced awake by the guilt created by how nice everyone was being, but mostly angry at herself for jumping from one extreme to the next, never feeling she could own up to wanting both.

So she hadn’t been surprised in the slightest, three years and a half-dozen lesbian relationships later, to receive the wedding invitation including Karen. Those who hadn’t already been keeping tabs on her via social media would have been filled in by Troy’s family. Besides, any gossip surrounding her was probably aimed instead at the fact that she’d actually been with someone for over six months.

“Troy wanted something big, but my folks couldn’t afford it. We had a cookout afterwards, a potluck-type thing.”

“It was nice. Simple.” Nell didn’t remember much else from that day, other than a whirlwind of eating, drinking, well-wishing, regret.

“Well now you’re on our team,” Karen said, tipping back the rest of her wine, “and unless we’re the first couple to tie the knot after it becomes legal, I won’t be so satisfied with a courthouse.”

Though Nell knew Karen was mostly kidding, she had to force a grin. She finished the rest of her wine in a gulp, then held out a hand for Karen’s glass. “I’ll get you a refill.”

On the way to the bar, Nell looked around for Troy and his new wife, but was relieved to remember that they were off taking pictures somewhere. Their reunion, after three years, could wait until she’d had a few more drinks.

The bartender brightened at Nell’s return. “Cashing in?”

She handed him their empty glasses and, as he poured, she noticed a strand of hair had escaped from his ponytail and fallen over his eyes. She wanted to reach out and tuck it behind his ear, but tightened her arms to her sides instead. “You like this job?”

“It’s not bad. I get a plate of food, there’s all these well-dressed people. Some nights are more entertaining than others.”

In no rush to return to Karen, who seemed to be socializing with a couple who had just arrived at their table, Nell leaned against the bar. “Oh yeah? What was your most memorable reception? Has anyone gotten just absolutely wasted?”

He set the full glasses down and retrieved some beer for a man who had come up behind Nell. “Mostly drunk uncles, drunk brothers. One time there was a woman, though, mother of the groom, who was so drunk she tried to dance on the bar.”

“This bar?” Nell laughed, trying to picture it. The tip bowl took up almost half of its surface.

“This very one. She fell and broke her arm. Have to say, that was the only ambulance I’ve seen at one of these.”

Nell suddenly wanted to get up on the bar herself, to leap over and grab this man with the smiling eyes and kiss him. The urge washed over her, caused the hairs on the back of her neck to stand up straight. She steadied herself on the bar and instead said, “Sometimes you’re bored though, right?”

He nodded, wiping a spill. “More times than not.” He filled an inch of a small plastic cup with clear liqueur and slid it across to Nell. “Have a shot before you have to sit down again.”

“You sure?” Nell looked into the cup and sniffed it, and anise hit her nose.

“Hey, it’s already on your tab,” he said, indicating the bowl. She tipped her head back, the rich scent wafting into her sinuses as the shot slid down her throat. She set the cup down and wiped her mouth on the back of her hand. “Thank you.”

“You know what’s frustrating about this job, though,” he said, handing her a cocktail napkin and leaning towards her. “It’s either all action or boring as hell. It’s never both at once.”

His sudden close presence and the slight buzz brought on by the shot caused Nell to back away a little, knowing she had to return to the table. She thanked him again and wound her way through the clumps of other guests, stopping to say hello to Troy’s mother, apologizing for not being able to chat long. She promised to come back and talk later in the evening, but knew she wouldn’t.

“The bartender looked into you. Too bad you’re not straight.”

“Too bad,” Nell said. They were called to dinner, and she followed Karen through the serving line, hungry.

Kate Estrop is a Boston-area professor, writer and editor. She is on the board of the Bisexual Resource Center and organizes Young BLiSS.

Learn more about Ashley and her art in "Introducing Ashley Shaffer & De’VIA" featured in this issue.

END_OF_DOCUMENT_TOKEN_TO_BE_REPLACED

Don’t Be Too Sure

By Laura Berol When Wilson Diehl recently published her essay, “Yes, I Really Am Bisexual. Deal with It,” in the “Modern Love” column of the New York Times, I liked it on Facebook and quickly got three responses, all from the same individual: “What are you trying to...

END_OF_DOCUMENT_TOKEN_TO_BE_REPLACED

By A.J. Walkley Up until fairly recently, I had a phobia that was specific to me, targeted at me alone. While it’s hard to admit, I experienced internalized biphobia from around elementary school when I felt ashamed for wanting to kiss my friend Mallory and my friend...