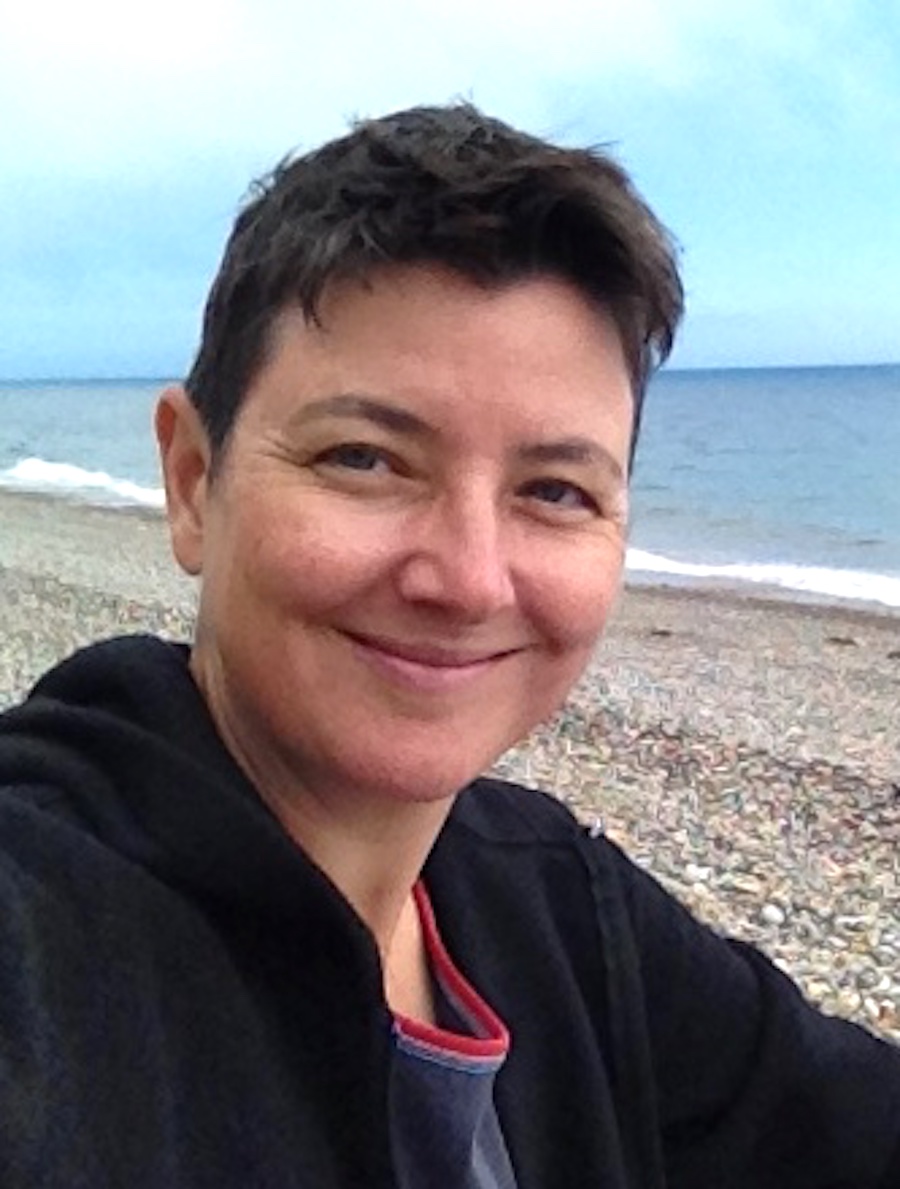 — When did you first know?

(That I was bisexual. Queer. Attracted to women, to men, to people of all genders.)

Coming out isn’t a one-time process. We do it not just for the first time, but over and over, and to different people, at different points in our lives. We come out to our friends, our families, our lovers, our co-workers. Each time, it feels like stepping out onto untested ground, wondering if it will fall away beneath us. This is the nature of first times: moving into unknown territory, hoping that we’ll find understanding and safety, but knowing that we might be walking into the fire.

I was 43 when I first left a partner. Before then, I’d always been the one who was left. It was an unhealthy relationship that left me with chronic anxiety, but I had enough strength remaining to recognize that to rescue myself I had to walk away. Some friends were shocked, having seen only a steady ten-year relationship. Their questioning fell on me like sharp-edged stones, punching holes in the armor of my decision and letting guilt and doubt pierce me.

Only one friend said the words I needed to hear: When I first met you, you had this lovely bright energy about you… And over the years you spent with him, I saw it all go away. She didn’t add, “You did the right thing.” She didn’t need to.

I first understood at nine years old that being a girl didn’t quite fit me. I short-circuited gender expectations by wearing boys’ clothes and having short hair, which allowed me to “pass” and do what I wanted to do uncriticized: climbing trees, building dens, making bows and arrows and adventuring in the woodlands near my home. I could be loud, bold, independent, take risks, and get dirty. I was “one of the boys.”

Except that I wasn’t. A fact that was brought home to me as years passed and hormones began to give me what I really didn’t want: a female body. I ricocheted into puberty with a feeling of being betrayed by my own self. A betrayal that I tried to undermine with anorexia, and outsize clothing that I borrowed from boyfriends. (Because girlfriends didn’t yet feature on my horizons.)

Fast forward to when I was 20 years old and first crushed hard on a woman. A musician whose husky voice and infectious giggle made me want to curl up inside her arms, somewhere warm and private. This first infatuation helped me realise that the close relationship I’d had with a female school friend was actually more than a friendship—Something that she’d figured out before me.

First times can bring fear. When that friend came on to me one night, I backed off. I don’t know if she was braver than I or just that she’d drunk more cider and I not quite enough. And anyway, I was in a long-term relationship (with a boyfriend), living away from home for the first time (in London), and kind of failing at college (long story). In that perfect storm of anxiety it’s little surprise that I didn’t seize the moment.

Fear is a paralytic: energy-draining and downright boring. I’ve done battle with the fear dragon and slain it many times over, but the neural pathways that anxiety has burned into my brain are not easily overcome. Yet I know that I don’t want to lose another moment of life experience by sacrificing it to the fear dragon. I’d rather burn to ashes under its onslaught.

It’s easier to face the fear when someone walks with you, someone who’s travelled the territory and can guide you through. I cried the first time I read a collection of real-life stories written by bi folks. It was like a whole tribe of people reaching out to me, saying, “This is me. This is you too. We exist. And, by the way, we rock.” I felt safe, welcomed, visible. In the infinite spectrum of human sexuality and gender, I had a home.

I needed this home because of other firsts that were happening to me about then. Like being mis-identified as a lesbian in an LGBTQ group, by a throwaway comment that left me feeling erased. No matter that it wasn’t targeted at me: the woman who spoke it was just joking about how all of us lesbians are handy with a toolbox. She meant to be inclusive, making me one of the gang; and wow, did I want to be part of the queer gang. Newly out, I needed LGBTQ tribe so much it hurt. But as soon as those words left her lips, I felt like I’d just stepped into another closet.

Bi-erasure and biphobia: two more firsts to get to grips with. Add another coming out task to the list: coming out as bi in every single queer space I wanted to inhabit. And I wanted to inhabit those spaces because I wanted connection with queer folks. Not least because now I was out and proud in my joyful bisexual self, I was feeling fairly enthusiastic about the prospect of actually putting into practice all that bisexual theory I’d been reading about.

So I went on a date with a woman. I had my first queer PDA kissing her in a bar. I felt reckless, bold, ecstatic. Then I kissed her on her couch back at her house. And I kissed her in her bed, which had shimmery purple covers. I kissed her tattoo, a black flower inked into the soft skin of her upper arm. And the fear dragon came out to play, but I told it to back the hell off.

That first relationship didn’t go somewhere lasting, but it left a lasting impression on me. That first kiss with a woman was emphatically a reminder that facing the fear dragon pays dividends, because, ummm, yeah. I knew most assuredly that kissing women was something I would do more of.

The thing about being new to something, though, is that our grip on it can be fragile. When a woman I dated told me, “Maybe you’re not as queer as you think you are,” shame flooded me down to my toes. I wasn’t really queer. I had no right to explore my sexuality, to attempt to understand it, to be in LGBTQ spaces. I was trespassing in territory that only gold-standard queer people had the right to take up space in. Imposter-me retreated into self-doubt, questioning my own sexuality.

And then I attended my first UK BiCon… And suddenly I found my tribe. Bi folks and pan people, workshops about consent and gender exploration and fanfic, strap-ons and polyamory and board games. Geeks and shy-bis and hotties and divas. Dancing for hours on a Saturday night; cosplaying queer sci-fi characters and drinking whisky straight. Being unable to take my eyes off a woman in oh-so-tight tan riding breeches.

Having safe ground, home territory, makes you braver. Knowing you have community, people who’ve got your back. It makes it easier to face the fear dragon, to take up the challenge of all those firsts that come along. Like the first time I stood up for myself in a conversation with a straight friend who wasn’t dealing with their own homophobia, telling them, “This is me you’re talking about. And this is your shit you need to fix.” Shaking, suddenly furious that here was yet another person who expected me to legitimize their own narrow-mindedness by erasing my true self, realising that my determination to live a congruent life was going to rub up against other people’s edges, but that this wasn’t going to stop me.

Daring to be myself, I discovered that I didn’t want to be anything else. The first time I sang with an LGBTQ choir at a Pride festival, finding my voice, literally and figuratively. I had my tribe with me, we had each other’s back. We marched through the city, and the streets were ours to be in openly, unafraid. Everywhere there were rainbows. For the first time, I knew I could make this city my home. That I was home, in every sense of the word.

— When did you first know?

A simple question, with a complicated answer. I knew I was queer at nine years old, but I didn’t know exactly what that meant. Now, at the age of fifty-one, I know that I’m a queer woman who claims the word bisexual. I know who I am now. That’s what matters.

I know who I am, by being who I am. Which means facing first times, over and over. Facing down the fear dragon, as many times as it takes. Maybe I get a little singed about the edges, but I can take a little heat. And you know what? Each time, the dragon gets smaller, and I’m still standing.

A lifelong eco worrier and wordsmith, Becca Flintham lives and works in the UK as an educator of children, young people, and adults. Her current jobs involve dressing as an Anglo Saxon, running community choirs, hanging out with wolves, and teaching kids how to set fire to things.