Around the World: Yossra, Egypt 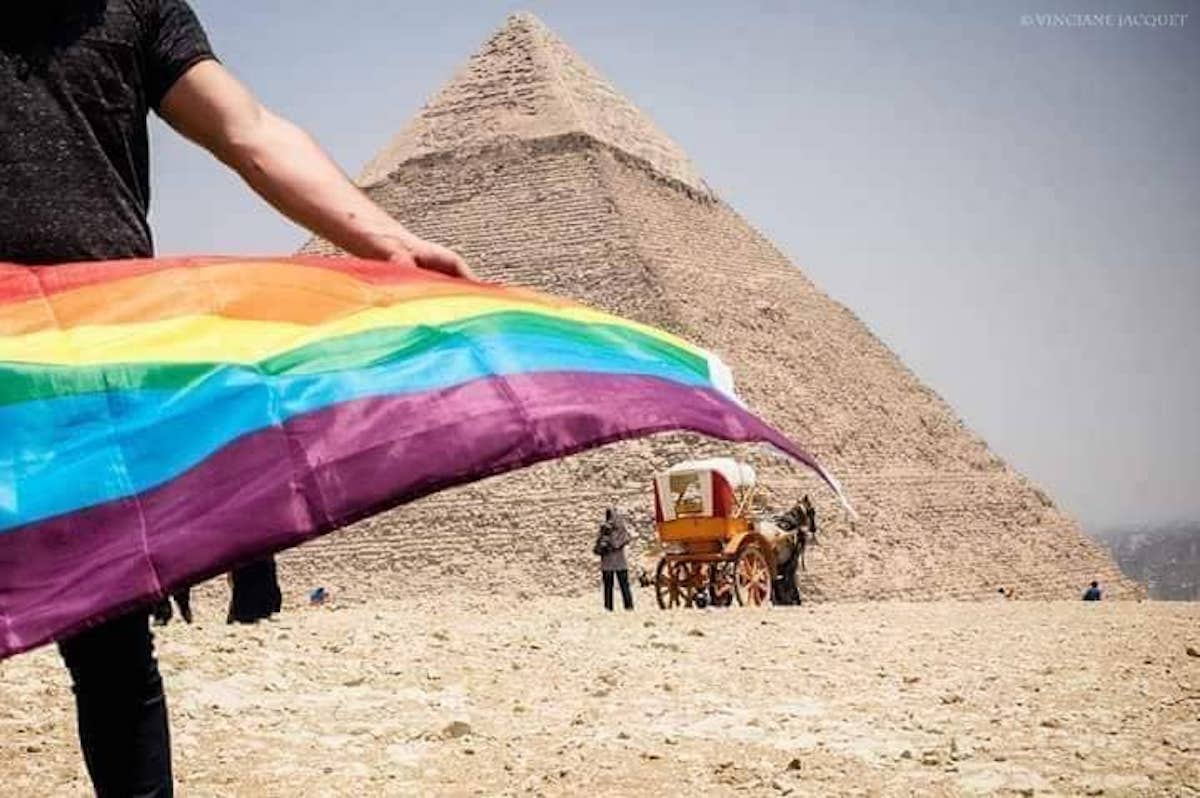 A few years ago when I first wrote to you, I was young. I was experiencing, for the first time, the meaning of freedom and self-love. I wrote to you just three months after my own coming out. If you remember, I am someone who was brought up in a religious, conservative society. I was once someone who used to hate herself, consider herself a sinner and a potential threat to every woman just for having sexual attraction towards women. I am someone who once sentenced herself to daily severe beatings to chain what she considered her inner monster.

And I am also someone who decided after eight years of living in the closet and severe self-harm to come out on social media in one of the fiercest societies. I am someone who faced tremendous pain for years to enjoy being true to myself and others, self acceptance, and self-love. I learned, them all in a long, tormenting human path. I am someone who found God in self-love and in the love of others.

I want you to read another chapter of my story. Please read it until the end; it may be long but believe me, you will find deep meaning in my words.

I came out at a time in which Egypt was becoming a nightmare for all minorities except Christians. Egypt was shifting towards dictatorship and military conservative capitalist rule. I was once a political revolutionary and risked my life to defend freedom and democratic rule. I participated in the January 25 Revolution and fought afterwards for years as a leftist dreaming of political freedom and justice. I lived in Egypt through three years in which Egyptian society hosted ideals of political freedom and I lived through five years in which the society shifted towards a belief in extreme dictatorship. At the beginning, most people thought that the military would only attack the Islamists and most people (I am not included) supported the crackdown during which hundreds of Islamists were imprisoned and even killed. The Islamists (the Muslim Brotherhood) were never fair or democratic; they were a conservative, oppressive Islamic party, but that does not justify violating their rights as human beings.

Once the Brotherhood was defeated, the system shifted towards silencing all opposition and imprisoning most liberals and leftists. A crackdown on the LGBT community, atheists, and authors followed! Our society was shifting towards a fascist hatred of everything and everyone different from the majority. The majority of Egyptians are neither Islamic nor liberal. The majority hate both extreme religious attitudes and progressive lifestyles. The majority wanted everyone to live within a “moderate” lifestyle, and the state enforced that “moderate” lifestyle favored by the majority by prosecuting both religious extremists and those who were openly atheist. And whoever wrote about topics like sexuality—even heterosexuality—was prosecuted as well. Egypt imprisoned around 40,000 political prisoners and 300 homosexuals in just a few years and in a famous case imprisoned a group of youths for holding a rainbow flag in a concert. They criminalized rainbow flags!

I was lucky enough not to go to prison although I was once close to it. All my friends from the LGBT community tried to leave Egypt; some succeeded, and some didn’t. But one important incident happened that affected me deeply. An article was published in my university’s student magazine about a diary of a homosexual in Egypt under the following crackdown. The writer was not from the magazine; it was a contribution by a reader. The article angered the Egyptian parliament, and everyone in the magazine (including myself) was under pressure although it was not us who wrote it. The shock for me was not the threat or the pressure. The shock for me was that the university (which is supposed to be a foreign university supportive of freedom of expression) did not support us. We were simply sold out. In the morning, we found out that the foreign professor who had supported the LGBT community on campus, and who had supported me after my own coming out, had fled Egypt. Though I understand his reasons now, it took me three years to forgive him for leaving us behind.

I continued to fight for LGBT people although everyone had backed off after the crackdown and was pressuring me to back off as well, telling me about the rapes that happen to detainees from the LGBT community. I insisted on writing about and supporting LGBT individuals, even those who contacted me for psychological support from fake accounts (people I do not know). I continued as a terrified fighter. I was deeply afraid and alone but I continued.

Yet I found myself rejected by the people I fought for. I found lesbians and gays who rejected me for being bisexual or because I was a religious Muslim. I am no longer Muslim; I am an Omnist, but when I was in LGBT groups I was a religious Muslim. They did not accept me or my veiled lesbian friends. There was an idea within the community that you should fit a certain stereotype if you are “one of us.” I was “too progressive” for the larger society, but my identity was too complex to fit into LGBT society. I viewed myself as a religious Egyptian Muslim bisexual woman. Every sect wanted to accept a part of me and oppress the other. I felt deeply betrayed by the LGBT community because I had risked my life for our cause. I felt betrayed because I thought that the LGBT community in Egypt was different from the bigger society and I found out that it is equally oppressive.

I broke down once when my belief in political freedom and justice was defeated by the dictatorship-supportive society and when the so-called liberals and leftists supported the oppression of Islamists. I broke down and thought about suicide but I stood and continued fighting, focusing on the LGBT community’s rights and once again I found myself breaking down. I broke down again when I found my society fascist against LGBT people in Egypt and LGBT people in Egypt oppressing each other!

I lost belief in meaning. I lost my reason to live. I wanted to live to give to others and to create a more fair, free-loving society. I wanted to help people love themselves and others and I woke up from this dream to find myself in the land of fear and the universe of hatred. I stood up again and decided to dedicate my life to supporting people and teaching them critical thinking and understanding of the other as a philosophy graduate. I was the first in Egypt to work on teaching people to think critically and get out of the small bubbles that their society locked them in and now I have hundreds of followers who attend my lectures and my work is covered by a few media outlets.

A few things happened that helped me to stand up again.

A large segment of youths started to become part of the progressive minority in Egypt during the last couple of years. They cannot announce themselves for the fear of persecution by society and the state, but they exist and grow in number. They are still a minority, but every day more and more people are leaving behind their deeply conservative past selves.

Second, a few people told me that I changed the way they think and view others and the world. They even changed their careers and points of view in life because of my work in promoting critical thinking and because of knowing me personally as a human being after my coming out. One of my closest bisexual friends who used to think about committing suicide because he is a religious Muslim learned to love himself and now lives his truth without any masks because of my support of him.

And there is an important incident that affected me. I met a stranger in a gathering and he came to talk to me. He told me that he knew me even though I did not know him. He told me that he was one of the people who contacted me over three years ago from a fake account after I came out. I stood beside him then although I did not know who he was and although he hated himself and rejected being gay. In the gathering he told me that I supported him greatly and I was the reason why he’d learnt to love himself. He finally had the chance to come and tell me after these years that my existence makes a difference;

I decided to continue;

I learned that I am not helpless;

I learned that I deserve to live;

I learned that I leave behind me an eternal meaning.

Editor’s note: Yossra’s story first appeared in the Fall 2015 issue of BWQ. Thank you, Yossra, for continuing to have the courage to BE, for having the courage to lift your voice. We hear you. We respect your courage.

Readers: please consider supporting the work of organizations such as ILGA (www.ilga.org) and IGLHRC (www.iglhrc.org) which advocate for LGBTQ+ human rights around the world.

END_OF_DOCUMENT_TOKEN_TO_BE_REPLACED

Interview by Robyn Ochs Holly Hammond is a 35-year-old activist who has identified as bi since age 17. She’s based in Canberra, Australia’s capital city, where she lives with her partner Clare and their tiny dog, Pez. She works as an activist educator with the Change...