Drop the Ball: A Micro-Scale Solution to a Macro-Scale Problem 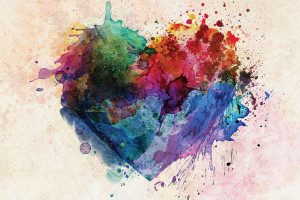 The intimate partner violence I experienced in a previous relationship wasn’t related to my bisexuality … or was it? When I learned of the high rates of intimate partner and sexual violence bisexual women experience compared to straight- or lesbian-identified women, some unsettling questions arose in my mind:

In essence, what is going on inside the head and heart of someone who commits violence against a bisexual woman?

I don’t mean this in a spirit of incredulous shock or onedimensional blame, nor do I mean to side with perpetrators or excuse violence. I also don’t mean to suggest that insecurity around a woman’s bisexuality will in every case lead to violence perpetrated against her. I simply think it is worth considering how societal views of bisexuality might help fuel, but not justify, such violent behavior when it arises.

After I began reading bisexual activist Shiri Eisner’s book Bi: Notes for a Bisexual Revolution (Seal Press, 2013), the question of how society regards bisexuality became, for me, not only about a collection of stereotypes about bisexual people but also about the social constructs these stereotypes point to and the value systems they uphold. From this shifted standpoint, it seems plausible to me that, in some cases, even a person who has no conscious qualms with bisexuality might be subject to collective, subconscious insecurities regarding this sexual orientation. Eisner proposes that bisexuality is perceived societally as inherently destabilizing to many cherished cultural values. Films, books, and media have often portrayed both fictional and real bisexual women as lascivious, wanton creatures who exist to satisfy others’ forbidden sexual hungers and curiosities. This image might not readily evoke anxiety, but imagine how one might feel if a creature they regarded as their personal toy came to life and started having their own needs and desires. Suddenly the opportunity to realize one’s selfish fantasies might not seem so secure, unless one could find a way to get the creature under one’s command again. Obviously, factors other than discomfort with bisexuality could provoke incidences of intimate partner or sexual violence against bisexual women. A perpetrator could have emotional or psychological problems that lead them to behave violently toward others regardless of sexual orientation. However, I don’t think this dismisses the possibility that subconscious, collective anxiety around bisexuality could play a part in the comparatively high occurrence of sexual and intimate partner violence against bisexual women. Society’s mantra regarding such individuals seems to be that we are to be desired but not to be trusted.

Was my ex’s potential insecurity over my bisexuality or in the face of my autonomy as a bisexual woman with needs of her own a factor that contributed to me experiencing intimate partner violence? It’s difficult to say. Regardless, the inquiry evoked for me by this question could suggest that the matter of violence against bisexual women reaches deeper than incidences that are clearly attributable to biphobia.

Now, could chronic internalized biphobia on my part have contributed to the personal low self-esteem that compelled me to stay in a relationship where I was subjecting myself to abuse? Quite possibly, yes. This evokes even more questions:

In other words, how much damage has already been done, in terms of social “education” by the time a bisexual woman finds herself a victim of intimate partner or sexual violence?

Here again, I don’t mean to point a finger at any specific groups of people. Popular conceptions of bisexuality seem to have something of a life of their own. They are like a ball being tossed around by many different people across a wide expanse: most people don’t know where the ball came from or where it’s going; all that seems to matter is keeping it in the air. When pressed with questions, it is likely few people could even come up with a good reason for these stereotypes about bisexual women.

Given the autonomy such conceptions seem to have and the profundity with which they threaten the stability of underlying social value systems, and given the tenacity with which some humans can cling to objectifying images that meet needs as primal and irrefutable as those bound up in sexual desires, I think it is important to evaluate the efficacy of efforts made to clear up misconceptions surrounding bisexuality. Perhaps within the bisexual community too much energy is spent reiterating that bisexual people need to be understood and not enough spent contributing to the nuanced care and attention that should be given to the complex task of demystifying bisexuality.

Furthermore, as Eisner suggests, rather than simply “clearing up” so-called misconceptions” about bisexuality, maybe it would be more worthwhile to elucidate common cultural conceptions of bisexuality as they are and question their foundations. To do this, someone must cut through the absurdity and break the rhythm of the ball-toss game. Someone has to drop the ball. To get through to an absurd kind of logic, one has to do something which defies the logic and renders it absurd. Creating a schism in the continuity of the ball-toss game must, I believe, happen on a micro scale. Experience has shown me that person-to-person conversation with those in my circles can in some cases be more effective in shifting people’s views of bisexuality than can, say, a website alone explaining the ABCs of what bisexuality is. Firstly, because each bisexual person embodies a unique and dynamic continuum of experiences and expressions of bisexuality, no one description can fully capture all the nuances of what bisexuality might mean to bisexual individuals themselves, nor can it respond precisely to potential misreadings of such a website. Secondly, if some people in the ball-toss game collectively start shouting, those near them may distance themselves to save their ears or enjoyment of the game and those farther away may not even hear; whereas if each of a handful of people asks their neighbor, “why?” and, with the insistent curiosity of a naïve but precocious child, doesn’t settle for a canned response, those neighbors may begin to ask themselves the same question.

In dangerous situations, such questioning would clearly be unwise. Even in a safe context, teasing apart the strands of a tangle of different points of view which could easily distort into misinterpretations might feel like pulling teeth or looking for a needle in a haystack. In the long run, however, I think that, where it is safe, possible, and relevant to do so concerning bisexuality, fostering open negotiations of meaning between bisexual individuals and those in their circles could potentially play a unique and vital role in fostering more realistic understandings of bisexual people (one which the sole act of holding up a banner may never fulfill on its own). Perhaps if the perceived threat implied by societal conceptions of bisexuality can be mitigated by real-life interactions with bisexual people, feelings of insecurity about bisexuality that might be implicated in, among other contexts, intimate partner and sexual violence against bisexual women could begin to be cracked open and questioned.

Lila Hartelius, B.A. (lilahartelius.wordpress.com) is a published writer and editor who has written funded grant and business proposals and served as editorial assistant for the International Journal of Transpersonal Psychology. Her work has been published in Weird Sisters West, Tendrel (Naropa University’s diversity journal), and Bi Women Quarterly. She was a workshop leader at EuroBiCon 2016 and has contributed to the efforts of Bennington College’s Queer Student Union, Naropa University’s GLBTQ student group, and Boulder Pride.