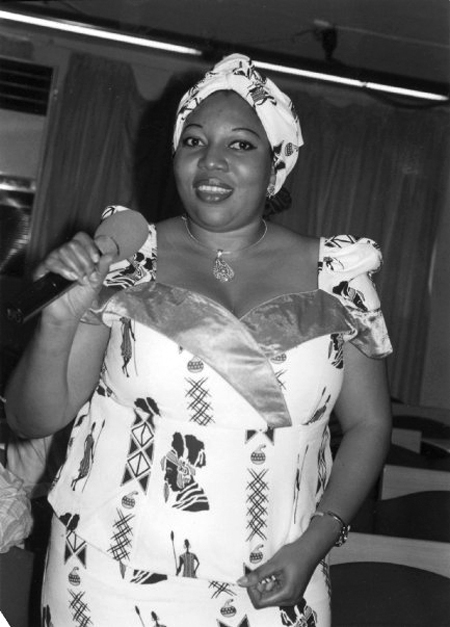 In July 2009 I attended a three-day LGBT human rights conference in Copenhagen associated with the World Out Games. There were over a thousand human rights activists present, from many countries. In an attempt by the organizers to insert some “B” into the program, I was invited to moderate a plenary panel on the second day of the conference.

At an earlier plenary session, several people had risen to challenge the organizers during the question period: it was unacceptable, they said, that only three of the 24 plenary speakers at the conference were transgender. The next day, during the plenary session I moderated, a woman stood up and pointed out that none of the plenary speakers was bisexual. “I am a proud bisexual woman from Nigeria,” she said in a proud and powerful voice, and I was in awe of her.

She is an obvious choice for this column.

Robyn Ochs: Yemisi, please tell us about yourself.

Yemisi Ilesanmi: I am a 34-year-old single parent. I grew up in Lagos, Nigeria. I am a law school graduate and work in Abuja as a full time trade unionist. I am currently in the UK studying for my postgraduate law degree in gender, sexuality and human rights. I am proudly bisexual, feminist and an atheist.

RO: What is your definition of bisexuality?

RO: How did you come to identify as bi? How old were you?

YI: I did not put a name on my sexual preference or my lack of one (laughs) until much later. I have always been attracted to the same sex and the opposite sex but I had always tried to deny that part of me and nurture the heterosexual part, since that was what society promoted and accepted as normal. I was quite young when I had my first same-sex attraction – it hit me like a tsunami wave and I was quite shocked by it. I could not put a name on it, or discuss it with anyone. At that age in my society, I was not expected to be discussing any sort of sexual attraction! With time and enlightenment, I realized I do not have to deny who I am and there really is nothing to be ashamed of. To the contrary, I see it as a step above the accepted heterosexuality because my feelings or attractions for someone are not based on gender but on the person. It does not matter whether you are man or woman or transgender, it’s the person inside that I am attracted to and for me attraction comes in different shapes and sizes. After all, variety really is the spice of life!

RO: You mentioned that you identify as atheist. Were you raised in a religious family, and if so, what impact did this have on your coming out?

YI: I was raised in a very religious Christian family, and I started studying religious books at an early age. As a voracious reader with inquisitive mind, I realized quite young that the portrayal of God in the holy books as a war-hungry, bloodthirsty fiend, keen on revenge for a particular race, certainly did not go down well with my picture of a omnipotent, omniscient omni-benevolent, all-loving god. It didn’t take me long to discover the word atheism and I heaved a sigh of relief that there are some out there who prefer logic to superstitions and fantasies. Being an atheist has made me a better person. I appreciate people for what they are, accept responsibility for my actions or inactions, give myself a pat on the back for achievements and chastise myself for disappointments. Pleasures and pains are life’s twin fountains. Atheism is about embracing reality no matter how difficult it is to accept and that has helped me to accept my sexual orientation because I would rather be true to myself in all aspects of my life. My bisexuality is part of me. I have learned to embrace it to get the best possible me. Admitting to being an atheist and a bisexual is more likely to attract an horrified glare, but I know that I do not need to be religious to be moral, loving and caring, and neither do I need to be heterosexual before I can experience real love and sexual satisfaction. I am comfortable in my skin.

RO: You are quite an outspoken woman. When you stood up at the plenary that I was moderating and challenged the organizers about the total absence of bisexual plenary speakers, I was very impressed by your eloquence and your passion. How did you first get involved in activism?

YI: It was the mid-90s and the military regime was in power. Like every other sector in Nigeria, the educational system was badly hit and the student unions became a driving force for the call for a democratic government. I was a student union leader and many of us got suspended from school, arrested and detained so many times for protesting against the military regimes and their puppets in power in the educational sector. I was involved in human rights activism as well as gender issues. I founded the National Association of Nigerian Female Students to challenge our marginalization and to encourage female students to actively participate in student unionism and issues of governance. It was from student activism that I started working with other progressive organizations in the country like human rights organizations and the labor movement. I started working full time for the Nigeria Labor Congress in 2002.

RO: Please tell us about the LGBT movement in Nigeria.

RO: What is is like to be a bi-identified woman in Nigeria? Do you know many others? Are there other bi people involved in the LGBT rights movement in your country? Do you feel fully accepted by your fellow activists?

YI: If you choose to be open and honest about your sexual orientation in Nigeria, life can be difficult, but if you choose to be hypocritical about it or live in denial, life might be tolerable – it depends on what makes life worth living for you. Hypocrisy seems to thrive in a society like Nigeria and many are just happy for you to lie and deny something so central to your being just to be accepted. I do know many bisexuals, lesbians and gay men in Nigeria; some acknowledge this only to a select few while many are in constant denial. Remember that same-sex relationships are considered criminal offenses in Nigeria. People cannot truly be who they are without fear of repercussions. Even though I work in a progressive organization with trade unionists and human rights activists, I cannot deceive myself and say I am totally accepted by my fellow activists. I am used to snide remarks. Many follow the “don’t ask, don’t tell” attitude. Colleagues would rather refer to my same-sex partner as my friend rather than a lover or partner and I find that annoying. I am a very out person in my workplace and in my social life generally, and I treat any snide remark as an opportunity to address the ignorance of the person making it.

RO: In your lifetime, what changes have you seen in Nigeria for LGBT people?

YI: I am happy that many are coming out to identify with the cause; I do hope that discrimination based on sexual orientation will be a thing of the past and the pending bill in the National Assembly will be voted down by right-thinking people who value democracy and human rights for all.

RO: As a “proud bisexual woman,” how do people respond to you? Do you have any interesting stories to share?

YI: I do not allow people to get under my skin or affect me with their ignorance. When you are in a same-sex relationship people do not want to accept that you are in a real relationship, they would rather refer to your partner as your friend rather than lover. Coming from a particularly bad same-sex break up, I was told that I can’t be heartbroken because a girl can’t break a girl’s heart! Finding support can be difficult in a homophobic society. Many same-sex breakups can be blamed on the unhealthy, ridiculous demands of the society wanting you to compromise, dictate to you how to live your life in order to be accepted and considered as normal. It is indeed a sick society that needs to be healed.

YI: Yes, I do see a value in transnational activism. As a trade unionist, workers of the world have always seen the sense in uniting globally to fight for better working conditions. And LGBT issues are workers’ issues – there is a need to make sure that workplace discrimination on the ground of sexual orientation is not tolerated anywhere in the world. Trade unions, especially from Third World countries in Africa and Asia, must see this as a key workers’ issue. An injury to one is an injury to all. I am doing my best as a trade unionist from a developing country to spread the message that we cannot rest on our oars until every worker is liberated from the yoke of oppression. I want to bring LGBT issues to the table of trade unions everywhere. These issues must no longer be swept under the carpet. LGBT workers must start demanding workplace protection from discrimination and that protection must be available to all workers irrespective of gender, color, race or country.

Robyn is the editor of Bi Women and of the international anthology Getting Bi: Voices of Bisexuals Around the World.