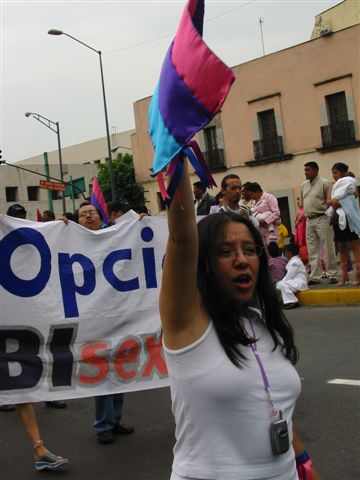 Myriam, 35, was born and raised in Mexico City, where she has lived her entire life. Her life partner is a “wonderful” man with whom she has been involved since she was fifteen; they married six years ago. They have no human children, but they do have canine ones: Coco, a Schnauzer, and Camila, a Cocker Spaniel. Myriam loves reading, especially poetry, playing with her dogs, spending time with her husband, drinking beer with her friends, and sleeping. She also enjoys studying: she completed a bachelors degree in sociology and a masters in political science, focusing on political theory, feminist theory, gender and sexual diversity. She works as a researcher in a center for gender studies. I interviewed Myriam for Bi Women:

RO: Please tell us your coming out story.

MB: When I was 24 or 25, I attended a workshop on body emotions and there I recognized that in addition to men, I was attracted to women. When I looked at women, I not only “admired” how they were dressed or how they looked; they evoked in me something more: erotic desire. At the time, I was at university studying sociology, and I had begun to explore feminism. I was in a group of friends who got together to read about feminism and share our experiences. At one of these meetings, I shared mine. They accepted and respected me. For this reason, coming out wasn’t hard for me. On the contrary, I enjoyed it a great deal! By that time, I already knew that I was not a “normal” person.” I studied sociology, became a feminist, came out, slept with whom I pleased. It wasn’t a big deal, nothing strange or foreign. On the contrary, I came out as bisexual with great passion.

RO: When did you first become a bisexual activist, and what caused you to get involved?

MB: After coming out as bisexual, I set out to find a bisexual group. I knew perfectly well that I wasn’t a lesbian because I continued to be attracted to men, and so I wasn’t interested in joining a lesbian group. By that time, I knew that every year there was a “lesbian-gay” pride march in my city, and I decided to attend. There I found a group called Caracol: Mixed Bisexual Group. They handed me a flyer with information about their meetings and I began to go to them. Even though this group didn’t last long, I met Angélica Ramírez and Natalia Anaya, who later founded another group called Sentido Bisexual (Bisexual Feeling) in 1998. I joined this group and was able to share my experiences, ideas and yearnings, and with this group I joined a march for the first time. It was an amazing experience! I felt happy and proud to say that I was bisexual.

This group dissolved in 2000. I missed it a great deal and knew, as did many others, that we needed a bi group, so three years later, together with Natalia and two other women, we founded Opción Bisexual (Bisexual Option) and I have been involved in this group ever since. It was very important thing to us that there be a space where we could discuss bisexuality, and where nobody would question our bisexuality or challenge our existence.

We meet the first Sunday of each month. We also have a website, off er workshops, discussions, meetings and get involved in political issues that we consider important to bisexuality, together with other LGTTTI (lesbian, gay, transgender, transsexual and intersex) groups.

RO: Are there other resources available to bisexuals in Mexico and in Mexico City?

MB: Unfortunately, not many. There is almost no information about bisexuality in Spanish, and what there is in English is hard to obtain. Obviously, there is the Internet, and thankfully, we know about bisexuality in other parts of the world. There are almost no groups where people get together in person. There is only Opción Bi, and there are some virtual groups online. Nor are there spaces like cafés or bars for bisexuals. Bisexuality here, like in most of the world, continues to be invisible and subject to a great deal of prejudice.

In Opción Bi, we try to have activities about and for bisexuals (and also for those interested in the subject, even if they aren’t bi). One change we have seen is that some LGTTTI events now include bisexuality, and we are sometimes invited to participate in them.

MB: I consider international activism and contact with activists from other countries extremely important. Here in Mexico, we are most familiar with the bi movement in the USA, including the work of Fritz Klein, and your own activism. We have read some of your essays in books that we have been able to get hold of here in Mexico City.

RO: Why do you continue to participate in bi activism? What keeps you involved?

MB: Being a bisexual activist has helped me to grow as an individual, and has taught me about myself, the times in which I live, my society and the world. For me, it is very important to work toward changing and improving my society. I consider the fight for the rights of bisexuals and the rest of LGTTTI community essential, and the movement that I have chosen is that we call here sexual and gender diversity.

It certainly hasn’t been easy, above all because of the prejudice and discrimination that exists against bisexuals, not only from the “heterosexual world,” but also from gays and lesbians. In Opción Bi, we realize that in addition to sensitizing and educating the outside world, we first have to do the internal work with lesbians and gays. T e problem is very serious, because bisexuals, along with trans folks, are the rejects among rejects, that is to say, those who suffer discrimination (lesbians and gays) discriminate against bis and trans folks. It is for this reason, at least here in Mexico City, that Opción Bi allies itself with transsexuals, transgender people and transvestites, and works together with them whenever possible. It seems to me that we are closer to the trans communities than to lesbian and gay ones.

And then there’s the larger society. In Mexico there have been cultural changes, but not enough, our society continues to be profoundly conservative with respect to everything that has to do with sexuality, the body and gender, especially among rural populations. In the cities, people are more exposed to sexual and gender diversity, but people are still uncomfortable with this: they would prefer we didn’t exist. A large part of Mexican society is uncomfortable with our LGBTTTI diversity. There is a lot of work to be done and I want to be part of it. Besides, I have to confess that I have a great passion for activism, and I am able to combine it a bit with my work as a feminist researcher.

On January 31, 2009, at the National Gay & Lesbian Task Force’s Creating Change Conference in Denver, Robyn was given the 2009 Susan J. Hyde Activism Award for Longevity in the Movement. The award comes with a beautiful plaque, inscribed with the following: “We...

END_OF_DOCUMENT_TOKEN_TO_BE_REPLACED

By Jen Bonardi Let’s be clear from the start: this perpetually single lady is no stranger to online dating. Girl, I did online dating back when Al Gore taught the Internet to boom. Just out of college, I had precious little dating experience because on campus, it...