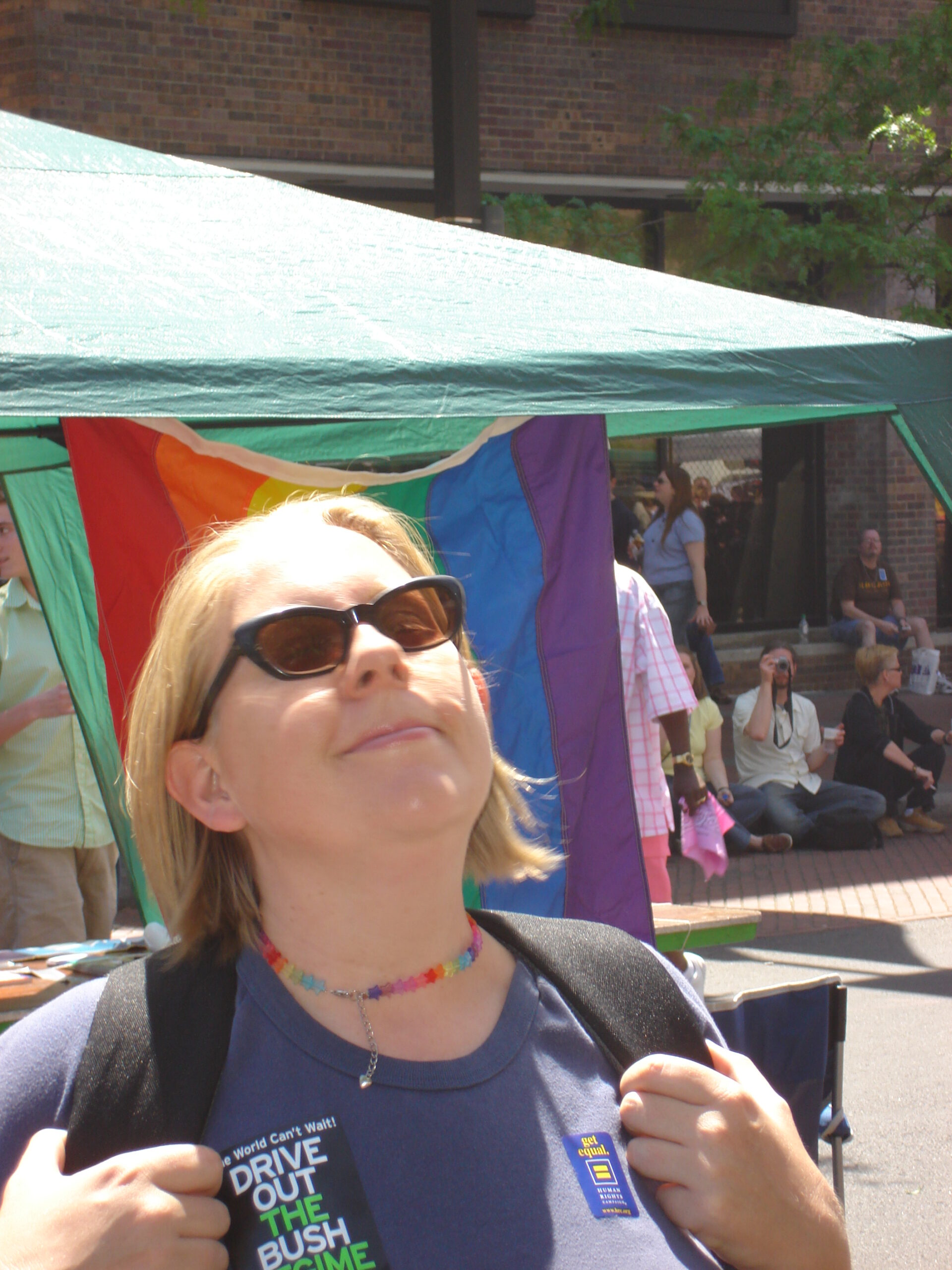 Holly Hammond is a 35-year-old activist who has identified as bi since age 17. She’s based in Canberra, Australia’s capital city, where she lives with her partner Clare and their tiny dog, Pez. She works as an activist educator with the Change Agency (www.thechangeagency.org) and a labor union organizer.

Robyn Ochs: How do you define bisexuality?

Holly Hammond: For me, being bisexual means being sexually attracted to men and women, and pursuing loving partner relationships with people of either sex/gender. As I write this I’m conscious of the limits of language, and the challenge to get beyond the gender binary. I don’t mean to imply there are only two biological sexes or only two genders. But the reality of my life is that my partners have been men and women, and I feel attraction to people who identify as male, female, and trans.

RO: How – and when – did you come to identify as bisexual?

HH: I came out as bisexual when I was 17. I think identity is historically and culturally specific. I was involved in the women’s movement, and other kinds of activism, in the last two years of high school. Many of my friends were lesbians and bisexual women. I was involved in ACT-UP, promoting safe sex education and access to materials for high school students. One of the ACT-UP activists was Wayne Roberts, a fantastic bi activist involved in the Australian bisexual network. So there were people around me who made bisexual identity accessible to me, and it was a great fit. To me, being a bi woman meant being in charge of my sexuality, being open to all sorts of experiences, having opportunities to get close to different people, without being constrained by the sexual and gender roles expected of heterosexual women.

RO: Why does this identity matter to you?

HH: It’s part of the truth of who I am. I think it should be visible and available as an identity to anyone who wants it. I like that it’s subversive of the hetero/homo binary and of homophobia. I also strongly identify with Queer identity.

RO: I had the pleasure of meeting you in July of 2009 at the International LGBT Human Rights conference in Copenhagen, and I attended an excellent session you organized titled “The B in LGBTIQ: Bisexuals claiming space in Queer community and social action.” How did that come about, and what was it like to present at an international LGBT rights conference?

HH: It actually followed from presenting a workshop at the first International LGBT Human Rights Conference in Montreal in 2006, which was a great but challenging experience. When I offered my abstract for that conference I was told I’d probably be sharing my workshop with a number of similar presentations, so I went with an expectation of getting to meet awesome bis from around the world. When I arrived for the conference I discovered that mine was the only workshop focused on bisexuality, one workshop out of over 100. I was hit by feelings that will be familiar to many bisexuals: wondering if this was a space for me to be in, how the organizers could let this happen, whether this was going to be yet another time where we’re overlooked and disrespected. It was actually a really empowering experience to run that workshop, and I was proud to be staking space for bisexuals, and making us visible. It was also lovely to connect with some awesome intersex activists, and notice our connections as binary-subverting folks.

I actually have a commitment to hold LGBTIQ caucuses at mainstream events, and to make space for bisexuals at LGBTIQ events. This works for me, because it connects me with my people when we’re not always visible, and I think it makes events work better for everyone to have this sort of caucus space.

So after Montreal I was keen to hold a workshop at Copenhagen, and I also wrote to other bisexual activists (including you!) to encourage participation. The second conference was a big improvement, with you chairing a plenary, running a great workshop with excerpts from Getting Bi, and great work by Danish bis running a number of workshops and a gathering after the conference. With my workshop I wanted to look at this issue of our marginality in Queer spaces. I know I can have a bi chip on my shoulder, thinking it’s the responsibility of gays and lesbians to make a space accessible for us, but I also think it’s about how we organize and claim our space in those communities.

Besides feeling a bit spun out about being a visible bisexual in queer space, I had feelings about being an Australian presenting at an international conference. Our national identity has a lot of baggage about feeling insignificant on the world stage, of not knowing enough or being important. So it was empowering in lots of ways.

RO: I remember that you showed a fascinating diagram of your own sexuality journey. Would you briefly describe the workshop, and share the diagram with our readers?

HH: I used a few diagrams – one that showed my participation in the Queer community, one that showed my visibility as a bi person, and another that charted my relationships. I think it can be really difficult to talk about bi identity, without sharing our stories and what our bi lives have really been like. I’ve lived with the situation of being read as a lesbian while in same-sex relationships, and read as a heterosexual woman while I had a male partner. I was most visible as bi when I was single and playing, or in non-monogamous relationships. It’s hard work continually coming out, and sometimes it just seems academic to people. One of the things I find frustrating is when people can’t handle aspects of me which deviate from their (current) perception of me as lesbian, for example, if I say a guy is hot, or talk about my past unplanned pregnancy.

RO: Australia used to be one of the hubs of bi activism. In fact, I keynoted an amazing bi conference in Sydney back in 1998. What’s it like today? Are there active bi groups? Is the broader LGBTQQIA community inclusive?

HH: I remember how dynamic bi activism and community was in the 90s. It doesn’t seem that way to me now, but it may be that I’m going to the wrong parties or I’ve missed these groups somehow! It’s interesting, I think I’ve actually resisted gathering separately with bisexuals, or organizing politically just with bisexuals. Part of this is probably internalized biphobia, but I think it’s also because I’ve always seen our interests as fundamentally aligned with lesbians, gay men, trans, intersex, queer and gender queer folks of all stripes. So I’ve tried to stay a part of a broader Queer movement and community, even though that has been really hard at different times, especially when I had a male partner for five years.

RO: Last summer I met your lovely partner Clare. How did you meet? How long have you been partnered?

HH: I met Clare at primary school when we were both ten! We didn’t get together until long after school, when we were both 25. We just celebrated our ninth anniversary. We have a wonderful relationship, and I’m so proud to be with her. She’s a lesbian, and a great ally. She notices biphobia and interrupts it. At the Copenhagen workshop she facilitated the gathering of the non-bis, while we had the bi caucus. She shares my commitment to social change, and it’s great to feel that we’re working together to make the world better. RO: What changes have you seen in understanding and construction of sexualities in Australia over the years you have been out?

HH: There has been a lot of change. I think there has been increasing recognition that identity can be fluid. Understandings of gender have changed in huge ways in our communities. Trans identities have become much more visible. I think this has been challenging for bisexual identity – what’s all this fuss about being attracted to men and women…what’s a man or a woman anyway? Straight society has become more accepting, or titillated by, some level of bisexual activity, so long as the real serious partner relationships are heterosexual. Bisexuality in some way seems more visible and valued in predominantly straight swinger culture, than in queer communities. I don’t think (I hope) that people are not being so harshly ostracised within queer communities for having straight sex or desires.

I think there is a gap in understanding actual bisexual identity. That some of us are just as likely to form a relationship with people of the same sex/gender as the opposite. That this identity isn’t necessarily about fluidity. I actually think I’ve been pretty consistent with my attractions! A lot of people still seem to think of sexuality as a linear narrative, so if you’ve had one relationship with a man, then a relationship with a woman, then the most recent relationship defines your identity. Maybe for some people, but not me.

Robyn is the editor of the 42-country anthology Getting Bi: Voices of Bisexuals Around the World and of Bi Women. 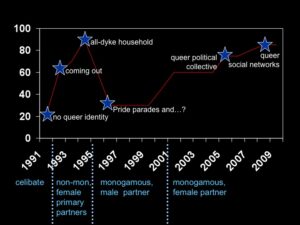