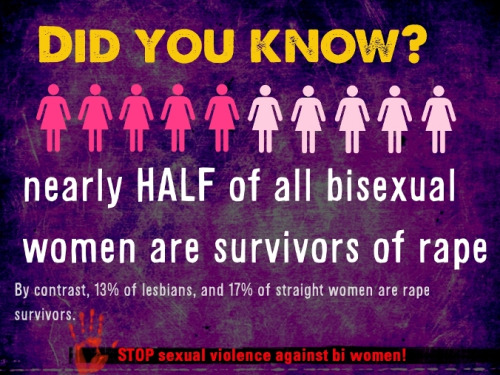 Sexual violence is a global public health problem. While country-specific statistics vary, approximately one in five women will be sexually assaulted in her lifetime. That number jumps to two in five if that woman identifies as bi+ (bi, pan, fluid or another nonbinary sexualilty) and to one in two if she is transgender. In the United States, the National Intimate Partner and Sexual Violence Survey (NISVS) found that compared to 13% of lesbians and 17% of heterosexual women, 46% of bi+ women have been raped in their lifetimes. When this survey’s results were published in 2016, they made national news, but they only confirmed what many smaller previous studies had demonstrated: bi+ women face a disproportionate amount of interpersonal violence. The bi+ umbrella also has more people within it who are disabled, racial and ethnic minorities, HIV+, homeless, of lower socioeconomic status, and mentally ill. All those groups are also more frequently targeted for sexual violence.

Socially, bi+ women are more likely to tell their romantic partner, a formal support professional, or the police about an incident of sexual violence than heterosexual or lesbian women, but they also report fewer positive reactions from those who are supposed to help them than heterosexual or lesbian women report. Other studies show that bi+ people are unlikely to seek help because they are concerned that they will be blamed, or a provider will respond with hostility toward their sexual identity. Studies also suggest that many heterosexual people believe that bi+ women cause unwanted sexual interest toward them due to their sexual orientation, which makes them more vulnerable to victim blaming. This is consistent with studies that have shown that bi+ women are often labeled as promiscuous, less mentally stable, confused, or not to be taken seriously by both straight and gay people. People are also less likely to view an act of violence toward a bi+ woman as a hate crime than an act of violence toward a heterosexual or lesbian woman. While more affirming spaces and well-trained staff who help bi+ women heal are emerging, finding those spaces and helping professionals can be challenging.

While efforts by activists, advocates, prevention educators, and researchers to address sexual violence in LGBTQ communities have increased in recent years, there is a need for more attention to the violence faced by bi+ women. This is especially important because bi+ survivors often do not feel accepted in either straight or gay spaces or in the anti-violence service spaces that often assume heterosexual men as perpetrators and heterosexual women as victims. This issue on Violence and Recovery provides a venue for storytelling and sharing of the often-unheard experiences and perspectives of bi+ women who have experienced trauma, either vicariously or directly. However, there is help and learning available beyond this issue.

We recognize that this issue could be triggering for survivors of sexual and intimate partner violence as well as for secondary survivors, those with loved ones who have survived violence.

If you are interested in seeking support because you or someone close to you has survived violence, please see the resources listed later in this issue.

LB Klein is a PhD student in the University of North Carolina at Chapel Hill School of Social Work. Her research focuses on preventing sexual violence against LGBTQ people