Around the World: Warsaw, Poland An Interview with Agata Maksimowska 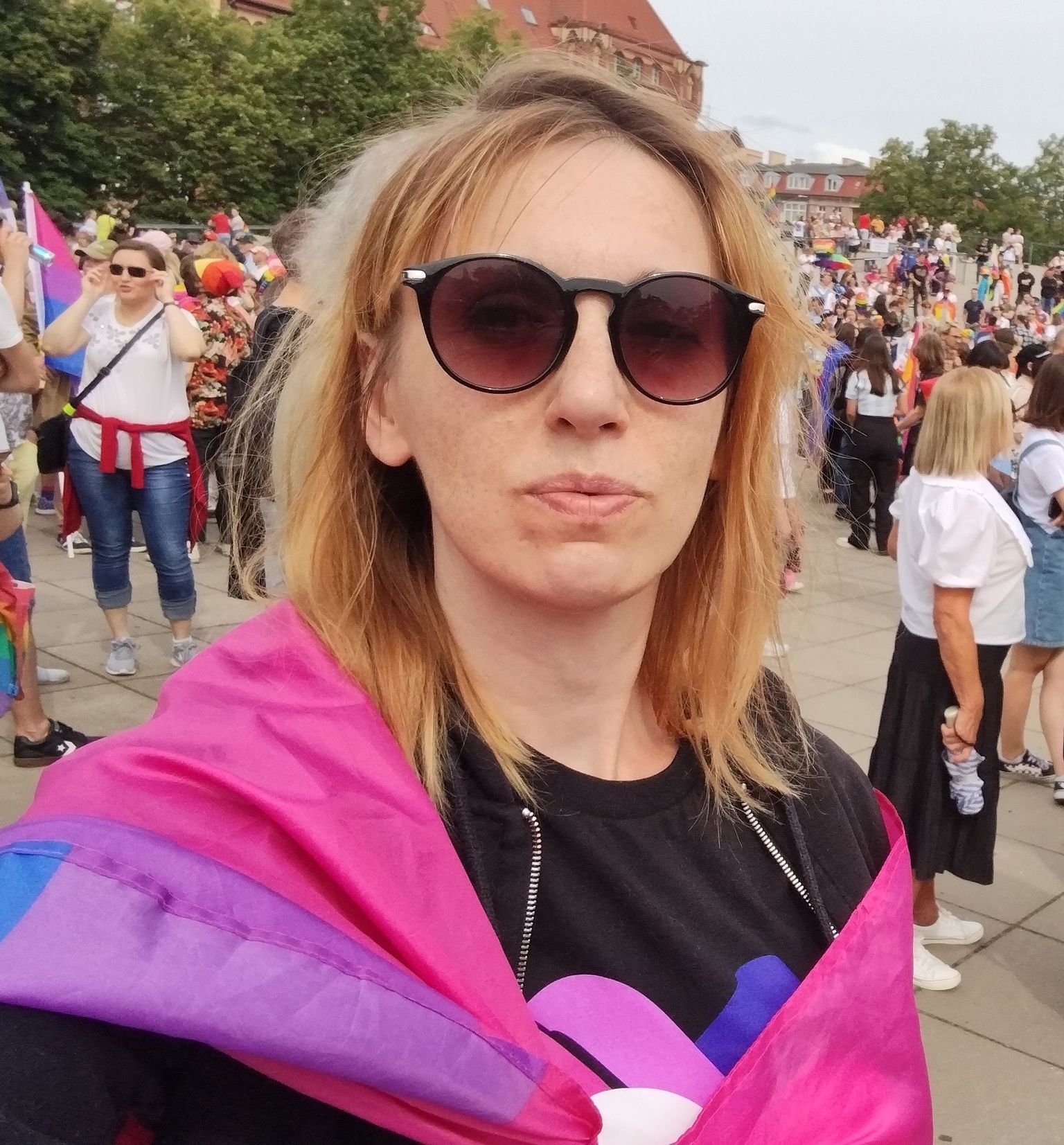 Robyn: Agata, please tell us about yourself.

Agata: I am a 42-year-old woman living in Warsaw, Poland. I graduated with a degree in Psychology and Cultural Anthropology from the University of Warsaw. I grew up here, although as a student I have also lived in Lund, Sweden for half a year and in Birobidzhan, Russia for a similar period. I am the author of the book Birobidzhan (in Polish) which was published in 2019 and is based on my ethnographic fieldwork conducted in the Jewish Autonomous Region. For many years, I have been working as a project manager for several NGOs (non-governmental organizations) in Poland, focusing on human rights and on combating discrimination. My current work focuses on monitoring and evaluation of grant programs, grant management, and grant-making. Since 2018, I have been attending the bi+ group at Lambda Warszawa Association and from 2020-2022 I co-led this group.

R: How did you come to your bi identity?

A: I started to identify as bi when I was 35 years old. Before, I mostly identified as heterosexual. Yet, as I was also feeling some attraction for persons of the same gender, at age 22 I came out as a lesbian to my mother. After a short time, I rejected the label “lesbian” because I was sure that I still liked people of genders different from my own. However, continuing to identify as heterosexual became problematic to me, as it involved suppressing feelings towards persons of my own and similar genders. Although I knew the term bisexual by that time, I did not use it to describe myself. I think I needed some time to sort out my identity. This came just naturally: one day I realized that a person can combine and accommodate different possible identifications and that my feelings and attractions are exactly what can be named “bisexual.” That day I felt happy and relieved. Immediately, I also felt the urge to meet other bi people.

R: What can you tell us about the experience of being bisexual—or more generally LGBTI—in Poland, and specifically in Warsaw. I’ve heard that there is quite a lot of hostility toward LGBTI people in Poland. Is this your experience? How have things changed over time?

A: Unfortunately, Poland is ranked the lowest in the European Union when it comes to observance of LGBTI rights, according to the International Lesbian, Gay, Bisexual, Trans and Intersex Association, Europe. Same-sex marriages are not legal and neither are civil unions. Transgender people struggle with lengthy court proceedings to change their names and gender markers due to a law dating back to the 1960s, as the Gender Reconciliation Act aimed at simplifying the procedure was vetoed by the President in October 2015. LGBT-related issues are used as a political tool—by MPs of the ruling, ultraconservative, nationalist party Law and Justice (PiS), along with Catholic church officials—to build a perfidious narrative around so-called “LGBT” ideology, a handy concept describing an alleged cultural model adopted “from the West” that threatens “traditional Polish values.” All this makes being an LGBT+ person in Poland rather difficult. Exposure to this kind of propaganda and lack of equity has pushed many of us to leave the country. Personally, I suffer from the fact that my marriage (I got married to my wife in Copenhagen in 2021) is not recognized in Poland, and I lack the same rights as those in different-sex couples.

However, it must be said that LGBT organizations and informal groups are doing their best to counter the official narrative, combat discrimination, and offer support to the community. The number of pride marches has been growing each year.

Bi+ activism is quite a new thing in Poland and only recently bi+ people have become more visible, even within the LGBT+ community. This activism is, first of all, aimed at fighting monosexism and stereotypes (eg., of bisexual people being “unfaithful,” “undecided,” or “privileged”) as well as increasing the visibility of the people identifying under the bi+ umbrella. Apart from that, bi+ activists in Poland have to challenge the outdated, yet still popular notion of bisexuality itself. There are a lot of people who refuse to identify as bisexual because they believe the term only refers to two genders and therefore excludes non-binary people. Another challenge to bi visibility is that some women with multigender attraction may identify as lesbian due to the popularity of “lesbian” as a political identity. There is also a problem with bisexual identity being understood as a “lighter,” “softer,” or “incomplete” version of gay identity that results in a less serious approach towards bi+ people, leading even to rejecting our right to be fully recognized as members of the rainbow community.

R: What words are used to describe lesbian, gay, bi or non-heterosexual people in Poland?  Are these words equivalent to their English counterparts, or do they have a different meaning?

A: In Poland we say “lesbijka” for a lesbian, “gej” for a gay man, and “osoba biseksualna” for a bisexual person. We also use “osoba transpłciowa” for a transgender person, “osoba aseksualna” for an asexual person, and “osoba interpłciowa” for an intersex person. The word “queer” has not been translated nor has there been found an equivalent word to cover its meaning. It’s being used in the same way as its original English version.

R: I’ve also been reading about the war in Ukraine, and how people in Poland have really stepped up, helping displaced Ukrainians and taking people into their homes. How has this impacted you personally?

A: Just after the Russian aggression on Ukraine had started, Lambda Warszawa Association launched a supporting program for Ukrainian LGBT refugees in collaboration with the LGBT organizations in Ukraine. One of the most urgent issues was to help the refugees to find places to stay, so the major task carried out in Lambda at that time was to match people who offered accommodation with those who needed it. All this had to be done very quickly, as thousands of people were coming to Poland each day. My wife and I did not host refugees at our place, but we did help two girls from Dnipro, whom we met at the railway station when volunteering for Lambda. After two months they decided to return to Ukraine, but we are still in touch.

R: You are co-leading a bi+ group at the Lambda Association in Warsaw. How and when did the group get started? How did you come to be involved—and a leader? What kinds of activities does your group do? How often do you meet? How do you let others know about your group’s existence? How is your relationship with the Lambda Association?

A: The bi+ group started several years ago under the auspices of the Lambda Warszawa Association. I co-led this group from October 2020 to the Summer of 2022 together with Miłosz Przepiórkowski from Lambda. During the first year of my co-leadership, we ran the meetings online due to COVID-19, and just last year we were happy to get back to meeting in person. The group usually meets at Lambda’s premises on the second and the last Friday of each month, with a vacation break between July and September. It is a meeting group with elements of psychological self-support activities. We discuss various topics related to bi+ experience as well as bi+ visibility. This year we had our first bi+ contingent in Warsaw’s Pride Parade.

Thanks to a grant awarded to Lambda Warszawa, we were also able to implement a project enhancing bi+ visibility. As a part of the project’s activities, I co-ran a couple of bi+ visibility workshops called “Under the Umbrella” in several cities in Poland. We were supported by local LGBT+ communities in Wrocław, Toruń, Kraków, Gdańsk, and Katowice, which locally arranged the meetings with people who identify under the bi+ umbrella and those who would like to know more about the bi+ community. There was huge interest, and there is a chance that new bi+ groups will emerge as a result of these workshops. Also within the project, we collected 23 interviews with bi+ people living in Poland and published them in the form of a book. The volume, co-edited by myself and by Miłosz Przepiórkowski, was published in 2022. It presents various experiences and points of view, featuring the variety of bi+ identities in Poland and reflections on more universal issues such as biphobia, bierasure and, of course, bi pride. It is entitled Kropka and bi in Polish and its English e-version Visi-bi-lity will be out soon.

R: Do you have contact with bi activists in other countries? Do you see a value in transnational activism?

A: I have taken part in three bi+ world meetups so far, and I’ve very much loved the experience. I am also in contact with Hilde Vossen from the Netherlands, whom I was happy to meet in person during this year’s Pride in Warsaw. Hilde visited our group meetup and later helped us to carry a big Bi flag during the march. Not only that, she also took wonderful pictures of the event that were widely shared. Hilde is a great supporter and advisor, and we owe her a lot.

R: Indeed, Hilde is wonderful—and a great resource to bi+ folks across Europe and beyond. What are your hopes for the future?

A: I was thinking about starting some sort of bi-activism online, but I have not decided yet on the specific area that I would like to cover. I am still attending the Bi+ group in Lambda Warszawa, and I hope the group will grow as a safe place where bi+ people can meet and talk. It would also be perfect if a separate bi+ group could operate in Poland, one focusing more on bi+ activism, but all this depends on the capacity.

My dream is to attend an international bi+ conference or bi+pride event in another country, as I believe that there is potential in cross-country collaboration and knowledge and experience sharing.

R: Any last words? What else would you like us to know?

A: I am very much interested in recent research on bisexuality carried out all over the world, and I hope that there will also be more studies on this topic in Poland soon.