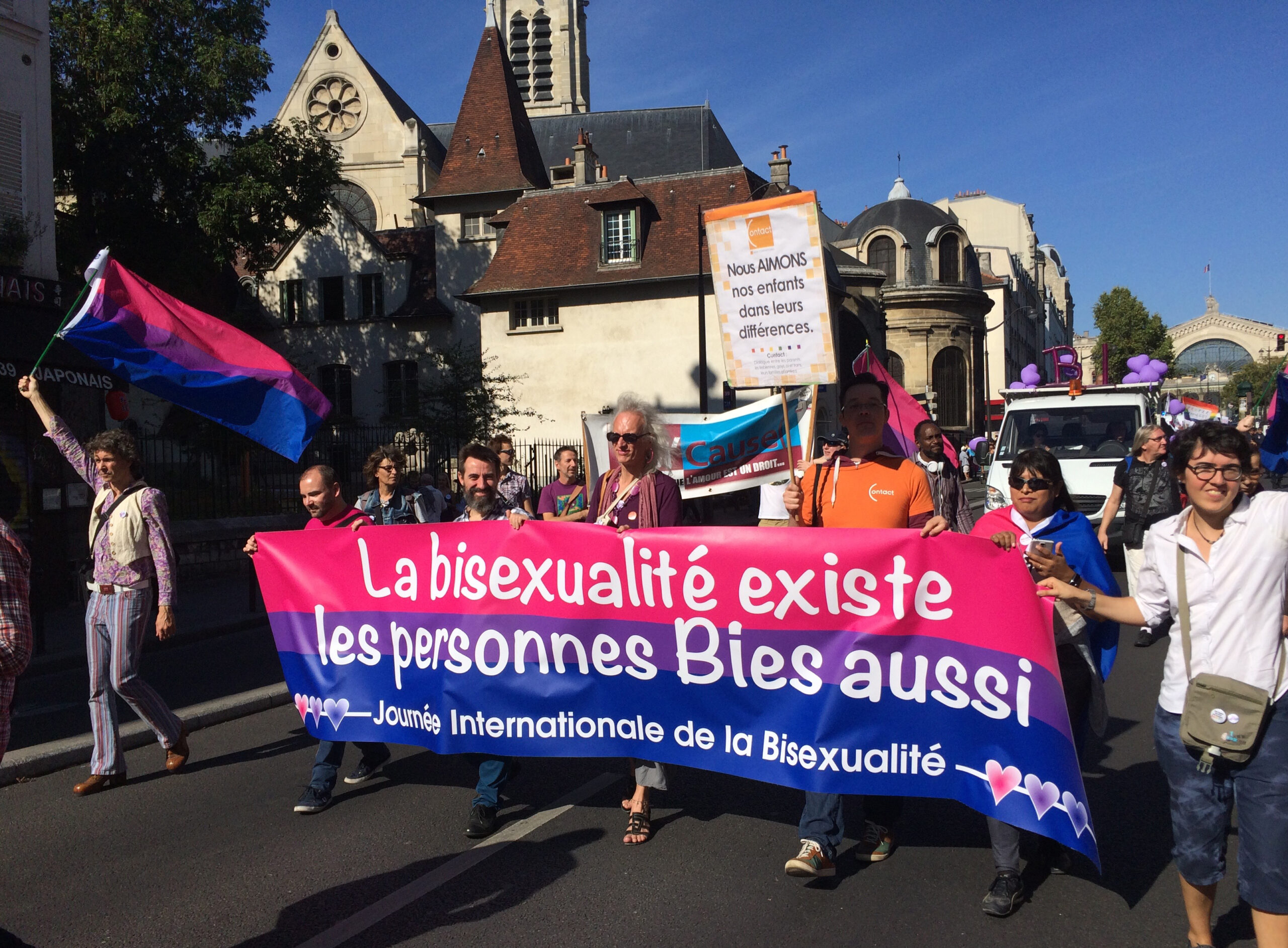 Valérie Baud is Secretary of Bi’Cause, the national association for the cause of bisexuality in France. I had the pleasure of meeting her at EuroBiCon in Amsterdam in the summer of 2016.

R: Tell us about Bi’Cause. How do you find or build community?

V: The bi community in France is nascent, embryonic. This activist, all-volunteer network organizes social spaces and meetings, mainly in Paris. Twice a month, Bi’Cause offers discussions on a chosen topic at the center of LGBT Parisîle-de-France. There is also an evening in a café; it is a moment of togetherness under the name of Bi’envenue (a play on the word “Welcome”). And we also meet up monthly at a restaurant.

Bi’Cause’s goal is to promote understanding, awareness, expression and visibility of bisexuality and of people who define themselves or are perceived as bisexual, or who are interested in this orientation. We provide support and assistance, especially to bisexuals, and we are committed to the prevention of AIDS and other sexually-transmitted infections. We have also committed to work in defense of victims of sexual violence or discrimination who have been attacked physically or psychologically, or who have been discriminated against because of their sexual orientation or gender identity, particularly if their bisexuality – real or perceived – is the cause of the aggression.

This association is the first in France that supports bisexuality. In Paris, in 1995, within the LGBT Centre, four women got together to put together an issue on bisexuality for the Center’s newsletter. Feeling sidelined by lesbians, these women founded Bi’Cause in 1997. Bi’Cause will celebrate its twentieth anniversary in May 2017!

We are a member of Inter-LGBT, a national federation of associations, and political center of the activist LGBT community. In Inter-LGBT meetings, Bi’Cause makes sure that bisexuals are represented and endeavors to ensure that our concerns are considered in collective projects. As the only bisexual association in these structures, Bi’Cause brings the legitimacy of the B to the LGBT representation.

R: Who comprises the community?

V: There are those who are passing through or will come for a while; for them, this is a time to understand others and break their isolation, to find their own way and figure out what identifying as bisexual means for their lives.

There are also activists who show up – once or repeatedly – because they want to act in support of bisexuality. THEY are the hardcore, the organizers of Bi’Cause.

R: Is there bi organizing outside of Paris?

V: Yes. We opened a Bi’Cause satellite in Nice. A local activist organized activities, and a group was formed within the Côte d’Azur LGBT Centre there. And when I organize evening programs on bisexuality in nearby cities such as Tours or Orleans, I find a lack of knowledge about bisexuality, so these events provide a rich learning opportunity.

In my experience, the LGBT community is currently very accepting of the bi community. What bis need to do now is to come out of their closets and create spaces for themselves. Nobody else can do it for us.

We are building community. This past September 24 was the occasion  of  the  Second  Bi March in  France,  scheduled around  the  International Celebrate Bisexuality Day, and this event was made possible through the involvement of the entire LGBT community on our behalf.

R: What do you want to see happen in the future?

V: We dream of spaces  such as bi cafes – non-exclusive spaces – but places where we can gather and socialize, be it in Paris or elsewhere. We dream of greater visibility. And because we are pioneers, it is important to document our history by archiving our materials and collecting testimonies.

R: How important is it to build separate bi+ support and social spaces?

V: Bi people are often victims of psychological violence. I often feel like I am a hybrid, a little bit in one world and the rest in another one, neither gay nor straight. It’s a whole pedagogical process to get people’s minds out of this binary equation, which is just a conceptual ideological montage, and not a reality.

It is very important to discuss our experiences, to make ourselves visible, to have our existence acknowledged with pride, and to encourage other bi people to take charge of their lives and challenge stereotypes associated with bisexuality. Biphobia starts with the denial, erasure, and stigmatization of bisexuality. Building these social spaces is one part of the fight against biphobia.

R: Why does it matter?

V: I was born in the 1970s, and people did not talk about homosexuality, and bisexuality was discussed even less. The Internet has given those of us who grew up isolated a space to find community and knowledge. The existence of Bi’Cause has given me strength. In the early 2000s, when I was 30, I was in an existential crisis. My partner, a lesbian, saw me as a lesbian. Others thought my same-sex relationship was a whim, as I had previously been married to a man for 10 years. It was very jarring to be in this situation, and being aware of others like me has been tremendously helpful. There were others like me, who claimed a bi identity, and so I, too, could assert my own existence. I existed. I was bisexual, and it was not just a personal fantasy. So, yes, community spaces, the sharing of experiences, stories, and real scientific studies on bisexuality, are a real pedagogical vehicle which will move things positively. So even if this space is sometimes a virtual space, it opens doors and helps us find community.

We should also aspire to a more open society overall and make space so that everyone is allowed to be whole and to blossom. There  are  as many bisexualities as there are bisexuals. We are moving in this direction but – watch out! – our freedoms are fragile, and – as we have learned – our societies can easily take steps backward.

Each year Bi’Cause picks a quote. To conclude, I’ll share with you this quote chosen for 2016, from Simone de Beauvoir: “… the ideal should be to be capable of loving a woman or a man; either, a human being, without feeling fear, restraint, or obligation.”

I have a dream…