Around the World: Surya Monro (Switzerland & the United Kingdom) 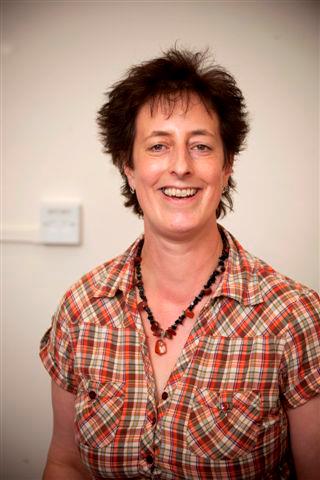 I am the daughter of mixed European and American parents. Growing up in England and Switzerland in the 1970s and ‘80s, I was pretty unaware of sexual diversity and sexual choice. But when I was just turning 15, I got a scholarship to a progressive international school in Switzerland. There I took part in an “Emancipation Studies” course, where we studied feminist theory and read lesbian novels; about that time, I realized I was bi. Luckily for me this identity was unproblematic in the alternative circles that I moved in during my later teens, until I had a fallout with my college’s Lesbian and Gay Officer who was determined that I should not be allowed access to the college LGB night because I had a boyfriend. My bisexual activist self was born! I remember designing a badge titled “off pink” at a conference when I was about 18. I still have that badge and it is now more than 20 years old.

Have things moved forward? For me personally, I had a lesbian phase for around six years in my twenties before coming out again as bi and getting involved in what’s now my “home” in many ways, the UK bisexual community. Starting in 1998, I regularly attended BiCons but often felt like an outsider, but eventually I got to know so many people that I fear I have become one of the dreaded ‘clique.’

I was one of those people whose intellectual capacities outdid my social capacities. I was in a monogamous relationship with a bloke and having a baby whilst interviewing poly people and exploring and critiquing queer theory. When the monogamous relationship with the bloke broke down (for many reasons, but I don’t think me being queer and bi helped), I struggled to combine respectable pseudo-heterosexual parenting and alternative relationship frameworks. I learned that like many other minorities with complex and intersecting identities to balance, my bi identity was not always the most important one. Being a good parent and contributing to the world via my work are more important. Sometimes these things all combine beautifully and other times they do not.

At the moment I am lucky enough to be in South Africa on a study trip where I am using material for my forthcoming book, Bisexual Identities, to be published by Palgrave in late 2014 or in 2015, to give a talk on the usefulness (or not) of sexual and gender categories for the Human and Social Research Council in Pretoria. It’s great to be part of the movement to bring bisexual voices more into mainstream society. I look forward to the day when gender and sexually diverse people can live happily and free from discrimination and abuse, in all the different countries of the world.

Dr. Surya Monro is a Reader in Sociology and Social Policy at the Centre for Research in the Social Sciences of the University of Huddersfield in West Yorkshire, UK. 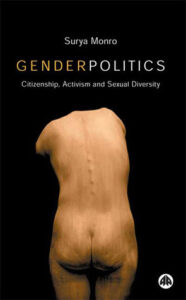