I never imagined that my bisexual identity would become the core of my LGBTQ activism. It took me several years and many encounters with discrimination to realize what I wanted. But I am thankful for all the experiences, since they made me grow and made me who I am today.

I want to share my path to and within LGBTQ activism in the hopes of inspiring others and finding allies.

I was born in Gomel, Belarus, but my family moved to Germany when I was 11 years old. Thus, I grew up in a European country, but I have always felt a strong connection to my home.

You could say I was lucky on my journey of accepting my bisexuality. When I realized my attraction was also towards women during my teenage years, my friends didn’t really care about it. So, I never gave it much thought.

First, it was only a sexual attraction. I couldn’t imagine being in a serious relationship with a girl, which I now understand was the result of the patriarchic and heteronormative society we live in. I was also unaware of my internalized biphobia, which, for example, was reflected in my belief that bisexuality is not as valid as homo- or heterosexuality and in my view that I already “had everything” and thus didn’t deserve to be represented by the LGBTQ community.

I remember one situation clearly. I was studying in Germany, and we were returning from a regional LGBTQ gathering. I wanted to become part of an educational LGBTQ project for schools and asked the main coordinator whether it would be okay for me to join since I was “only” bisexual, as if I wasn’t whole and would have needed to be a lesbian to be valid and entitled to join. (By the way, the coordinator confirmed that, of course, it was okay.) It hit me only after I became a bi+ activist how self-denying this perception actually was.

During that time, I worked at a university LGBTQ organization and was in charge of organizing small events like seminars and meet-ups. I also joined the above-mentioned educational project called SCHLAU, where we did workshops at schools, teaching about LGBTQ people and sharing our experiences. During one of those workshops, I first came out publicly as bisexual, and immediately received a lot of stereotypical questions from the pupils, e.g.: “Are you always in love with both genders?” or “Do you have to date men and women simultaneously?” I was anxious but also kind of relieved to be able to talk openly about my sexuality with a group of people for the first time. And my colleagues supported me there as well. In 2016, an opportunity for an exchange year in Russia presented itself. I wanted to be a familiar—my native—culture, and make a difference for the LGBTQ community there. While I enjoyed working for the university LGBTQ organization and being part of the SCHLAU project, I still had a strong feeling that my resources would be better used in a place where they were scarce. So I took the opportunity to study in Russia and to contribute to a positive change for the queer community here. 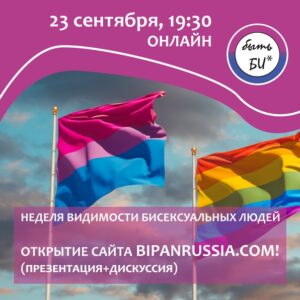 In Moscow, I found several LGBTQ organizations and started volunteering for two of them. My activism journey started with running small errands, providing support at events, then helping with interpretation and coordinating volunteers, and later organizing international events for up to 400 people. It was important to me to see the work from all sides and to value every member of the team. In my opinion, to really understand something you must experience it, which is why I took on every task no matter how small (or big) it was.

After gaining knowledge and expertise in a wide range of areas, I felt that I still was missing something in which I could specialize and become an expert. It took me a few years to figure out what it would be, even though the choice might seem obvious now.

I was often faced with biphobia. Sadly, most of the unacceptance came from the LGBTQ community. Since my main experience was in Russia, I am talking about the situation here. But I doubt that it would have been different in Germany. The overall circumstances are, of course, immensely better in European countries. But nevertheless, bi-erasure is present in the German LGBTQ community at an almost equal level to Russia.

One of my major experiences of discrimination is connected to my previous relationship. My ex-girlfriend, who is a lesbian, couldn’t accept me for who I am, and kept blaming and judging me for my attraction to men. At that time, for the first time in my life, I started doubting whether it was truly okay for me to like both women and men. After ending that unhealthy relationship, I had to learn to accept myself again. But I am convinced that it also made me reflect and analyze myself more, resulting in embracing my bisexuality on a deeper level than before.

By that time, I had already founded my initiative BiPanRussia. I had a supportive community, monthly online and offline support groups I facilitated, and get-togethers for movie screenings or play evenings where I could chat with like-minded people without being judged. Now the initiative is three years old, and I consider it one of my greatest achievements. Not only have we managed to grow in these short years, to organize all the aforementioned events, and prepare two exhibitions about bisexuality that have traveled across Russia, but we also launched the first-ever website about bisexuality in Russian on September 23, 2021!

This website covers the latest news about bisexuality. It is simultaneously educational, informative, and entertaining. We have a glossary of bi+ terminology and a library with publications and videos. We have an archive of every article on bisexuality published in Russian newspapers in the last 10 years. And we have an interactive map of every existing bi+ initiative in Russia as well as a monthly schedule of events across the country.

For me, this major achievement is only the beginning. Right now, we are still a small organization. I am the head, and I coordinate four or five volunteers who each take on different tasks. I want to expand the organization and make it more structured and sustainable. In the long run, I would like to build a network of bi+ organizations in Russia and unite them in the fight for bisexual rights. I also would love to be more internationally connected and hope that in the future we will have cross-border projects with other bi+ organizations around the world.

I want to dissolve the stereotypes in the LGBTQ community about bisexual people. I want to change how we are perceived. I want people to understand what kinds of struggles we face and that we need increased visibility and acceptance.

I have tried many things in my life in general and within LGBTQ activism. What I have learned is that if I don’t completely stand behind what I do, if I don’t love it with my whole heart, I will not last long. I will burn out or get bored. Now I have found my niche, and I am grateful to all the people who were part of that journey. I love what I do, and I plan to continue it for many years to come.

If you would like to connect or collaborate on projects with BiPanRussia, feel free to write Nadja on Telegram or Signal at @NadjaRainbow or contact her via email at bipanrussia@gmail.com. She would love to collaborate with you.

EDITOR’S NOTE: As of this writing (March 2022), Nadja has left Russia and is living in Germany.