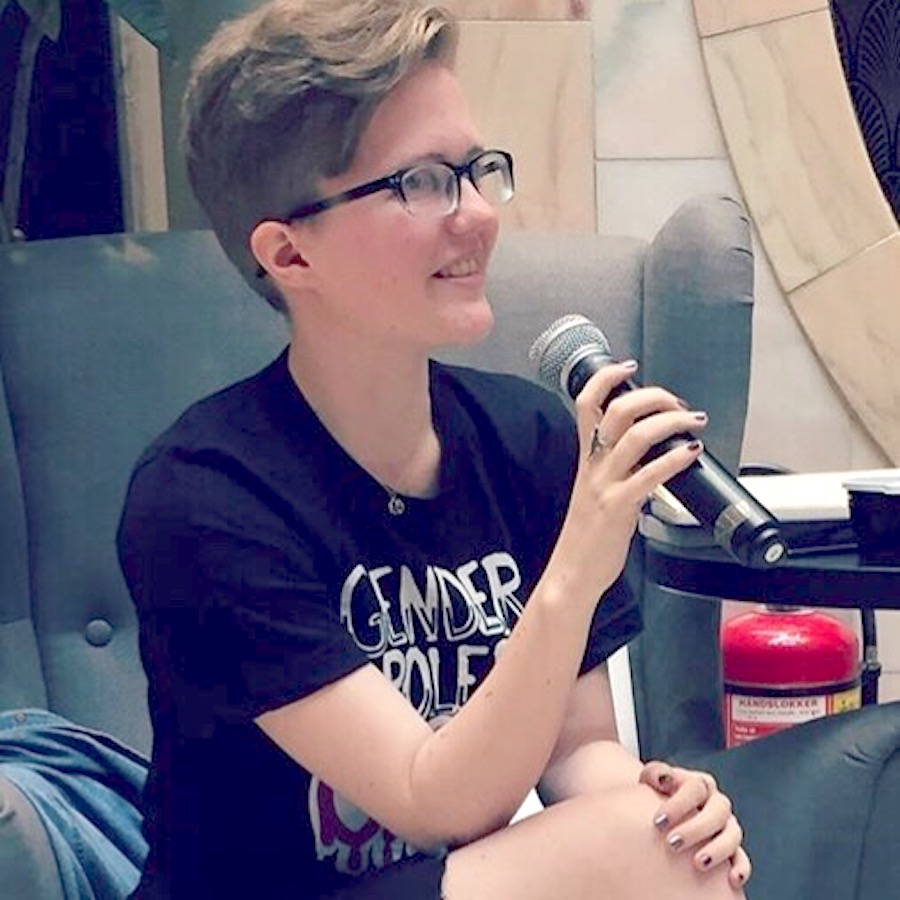 Christine Gandstad Johansen is a co-founder of Visible, a group for bisexual/pansexual people in Oslo, Norway operating under the umbrella of Fri, Norway’s national LGBTQ+ organization. I met Christine in June, when she arranged to have Fri bring me to Oslo to speak at Pride week events. Oslo has quite an impressive Pride, with 10 days of programming, including a week of programs, a art exhibition and café, and concerts at Pride House, a pop-up (temporary) community center in the center of Oslo, and nearby Pride Park, a 4-day festival that runs from late afternoon into the night. Christine arranged for me to a workshop on bisexuality for a packed room, and Christine and I participated on a panel on the International Bi+ Family. On the final day of Pride, we were both part of the first-ever bi+ contingent in the Oslo Pride parade, with Christine joyfully dancing at the front of the contingent most of the route!

Robyn: Christine, please tell us about yourself.

Christine: I’m a 27-year-old bisexual activist, and I use she/her pronouns. I’m the only child of parents with strong, old Norwegian roots, and am the seventh generation of my family to grow up on the property where I spent my childhood. It would be an understatement to say that I grew up with the expectation of becoming a certain type of person. My family’s expectations were likely heightened by the fact that I have no siblings, so if I went “astray” there would be no one else to take over the family farm or provide the essential grandkids.

R: How did you come to identify as bi?

C: I fully embraced my bisexual identity in the beginning of my twenties. The process was a very slow and long one. My journey coming to terms with my identity and fully embracing the bisexual label happened in unison with my struggle with depression and anxiety, so to me my bisexual label was key to embracing my full self and becoming happier and healthier in more than one way.

R: What words are used to describe lesbian, gay, bi, pan, or other non-heterosexual people in Norwegian?  What is the word for transgender and gender non-binary? Are these words equivalent to their English counterparts, or do they have a different meaning?

C: They mostly mean the same as far as I know. They are: Lesbisk (lesbian), homofil(gay), bifil (bi), panfil (pan), ikke-heterofil (non-heterosexual), skeiv (queer), trans, and ikke-binære (non-binary). The thing that comes to mind is that we use -fil after homo, bi, and pan, this is in contrast to homo/bi/pan-seksuell (sexual). The –fil ending emphasis an identity that is more than just pure sex, it encompasses falling in love, holding hands, broken hearts and understanding of oneself, perhaps a bit like English speakers use “gay and homosexual” to emphasize different things. You can often spot someone who is against the queer community by how they use only homo/bi/pan-seksuell (sexual) to try and shame us.

When it comes to gender, we don’t have two words like the English “sex and gender”; we only say kjønn (gender) so that when you want to differentiate between the two you have to say biologisk kjønn (“biological gender”). This can be a bit annoying when you are a transactivist and want to educate people.

R: You recently started a group for bi/pan people that is part of Fri, the Norwegian LGBT Association. What inspired you to start the group? What is your vision for the group? What kinds of activities do you have, and how many people show up?

C: My inspiration to start the group was, like embracing my identity, a long process. A defining moments that made me take the leap was a life-changing encounter. I was a student at the University of Oslo, and one day in my Sociology lecture, I spotted someone with very colorful hair: pink, purple, and blue. I looked again and saw that the purple line was narrower than the pink and the blue lines, just like the bisexual flag! The lecture started, but during the break I picked up the courage to walk over to this person and ask if the hair meant what I thought it meant. It did. This is how I met Natalia, and experienced the joy of finally having a friend who I could talk about all this bi stuff with! I would say the feeling was close to euphoric. Natalia didn’t just inspire me and support the idea of starting a bi/pan group—meeting her also made me want to let other people experience that sense of belonging and understanding that I had felt when I met her. I focus on community building, so most of our events are café meetups, and our goal is to have one meetup each month this year. On special occasions, we arrange something extra, like on pan visibility day, during Pride, and on bi visibility day, with panel discussions on a specific topic.

C: This is a hard question. Physically, bi+ folks are of course everywhere, they are in the gay choir (Homofonien), they are in the lesbian community (Lesbians in Daylight, Late Bloomer Ladies, etc.), they are in the queer immigrant community (Skeiv verden), to mention some. But as an outspoken, visible group, no, they are not. I guess this is part of why we chose to call our group VisiBle, because this was something that was important to us: that the «B» in LGBT+ be more visible, both inside and outside the queer community.

R: As an activist, what is an accomplishment of which you are particularly proud?

C: I think the accomplishment that gives me the most pride is not one thing but the feeling I get when people in the group show their big, genuine smiles, when someone feels at home for the first time, or when someone expresses joy in being able to talk about their identity for the first time at one of our cafe meetups. I think this is the reason I’m not so preoccupied with numbers. As long as the three people who showed up to one particular meetup felt comfortable and at home, I am more than happy!

If I had to choose one thing, though, it would be this year’s Pride parade, which marked the first time in Norwegian history that the parade had an official Bi+ contingent! There were so many vibrant smiles of people walking with us that I could’ve been living off that alone this last month!

C: Yes! Not long after forming VisiBle in Oslo, I was contacted by an activist in Trondheim, a city on the west coast of Norway, who wanted to start a group up there. The Trondheim group still isn’t official, but the core people are an important part of our group! We give each other support, we talk almost daily on Messenger, and once in a while we Skype to discuss important issues. For me personally, the Trondheim group has been a big support. Even though they can’t help directly, I have had many stressed days when everything seems too much, and the Trondheim gang have lifted my spirits with their support, interest, and humor (including a lot of puns). I hope that I will be able to repay them by helping support them as they work toward starting the group officially this year. My wish is that the VisiBle family spread to the whole country!

I also have a goal to be more interactive online, so that people who live far off or have problems coming to the meetings still Christine, continued from previous page can get a feeling of community from our group.

R: What contacts do you have with bi activists in other countries? Do you see a value in transnational activism?

C: Yes. Absolutely! I’m especially interested in science and research! Resources are hard to come by, but studies can be used across country lines. Up until this year we’ve had very few studies in Norway that included Bi+ people. This was part of why I wanted someone with a bit more “weight” on Bi+ issues to come and talk at this year’s Pride, and why I looked for candidates outside Norway. After some futile searching, I had almost given up when I went by Robyn’s website, but it was so easy to send her a message, so I thought “She will say no, but I might as well.” I was surprised by Robyn’s immediate answer that yes, she would “absolutely want to come to Norway!” I had first heard of Robyn in a YouTube video where her definition of bisexuality was used, and her definition really resonated with me. And I think a lot of people had a similar feeling after Robyn’s talk Beyond Bisexuality 101 during Oslo Pride.

R: When I was in Oslo, I was intrigued by the notebook you keep. Would you please tell us about it?

C: Yes! I’m very “artistically inclined” you could say, and people have also told me I’m very tidy. My notebook, or Bullet Journal, is first and foremost made to make my days easier. Most people in VisiBle have seen my notebook because I always bring it with me, and often pull it out to review something. I’m proud to say that several people in the group have told me that they feel inspired by my notebook! It includes basic stuff like my calendar, but the best part is the sections I have on projects I’m working on. One of the sections is of course VisiBle. I put in drawings, inspiring quotes and lists of things I need to do. I do this both to be more effective as a leader and also as an important artistic outlet.

C: I’m so thankful! I don’t know how to express this, but I feel surrounded by all these amazing people! I’ve made friendships that have changed my life, and I’m just so thankful for all these people living their lives just keeping up their amazingness every day! If anyone out there is wondering about starting a group of some kind, I’d say do it! Yes, it’s hard work, but the wonderful people you meet will more than make up for it.