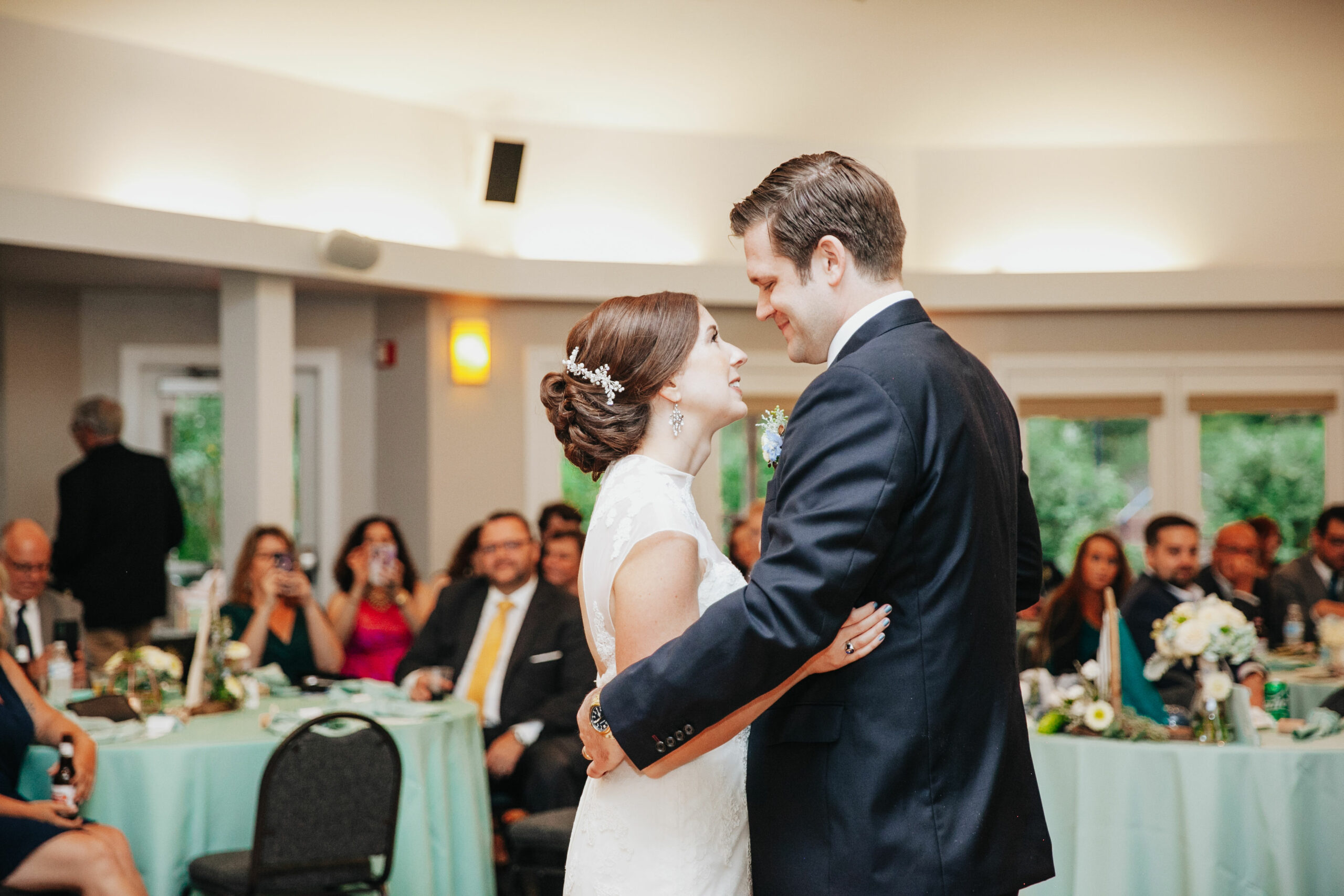 812 days. That’s how long my husband and I waited to be married after he initially proposed in July 2019. During these 812 days we navigated the lockdown, the loneliest fall and winter without friends and family, the mad scramble to postpone, and, at long last, the medical breakthrough that would enable us to have the vaccine-passport wedding of our 2021 dreams. As progressive thirtysomethings with our respective career goals, we also navigated our vision of who we would be as a married couple and how these choices would be signified on our wedding day. Wedding planning for us meant creating our own traditions (a civil ceremony performed by a friend; both parents walking me down the aisle) while sidestepping questions like, “Why didn’t you ask her father’s permission?” and “How does your fiancé feel about you keeping your name?”

And something else strange and unforeseen happened during those 812 days: A married friend approached me one night at a bonfire and asked if she could confess something. “I’m bi,” she said, sparkling with her secret. “My husband knows and is so supportive. I haven’t really told anyone else but, wow, does it feel good to say out loud.” A few weeks later, another married female friend came out to me as bisexual. And another. And then another as biromantic. As we saw each other more infrequently in 2020, my female friendships had certainly become more conversation-driven than before. But I never expected the floodgates to open with women who needed to talk to someone safe, someone who understood, about their truest selves.

“What are you, the bi whisperer?” my husband joked, gesturing to the pink, purple, and blue pride flag on my bookshelf. I had put it in direct line of my web camera because representation matters. I wanted the students I was teaching online—especially my self-identified LGBTQ students—to see a visibly queer professor at their institution. I wanted them to see that it feels good to be yourself. After all, I have been living this way for most of my adult life: open to trusted friends and partners about my sexual orientation, publicly critical of biphobia and bisexual erasure, and vehemently opposed to the Trump-Pence administration that supported—among other things—LGBTQ employee discrimination and erasure from the census. But it took me a long time to get there, especially having grown up in conservative western Maryland. After these women reached out to me, I reflected on the assumption that every opposite-sex marriage is heterosexual and the more complicated truths that lie underneath. What traditions do we reveal and conceal? Which are just for ourselves?

Concealing is a matter of safety and security, as the LGBTQ community knows all too well. For bisexuals, it is also a matter of being taken seriously given the pervasive stereotypes of bisexuality as “a phase” or not a legitimate way of existing in the world. People generally like categories that are consistent and easy to digest, and identifying as something other than gay or straight complicates these absolutes. I’ve watched friends furrow their brows and scramble to re-classify me after I tell them that I’m seeing a woman, and watched them breathe sighs of relief when my next partner is a man. I’ve been told by a past partner that my previous relationship with a woman was effectively void because I was now dating him; I was his “straight girlfriend,” and he would not accept anything else. My married friends who privately disclosed their queerness to me live on the line between appearances and reality, and when your reality is frequently challenged by people committed to misunderstanding or dismissing you, taking the path of least resistance is often less stressful. Appearances are comforting; appearances do not require our loved ones to reexamine their ideas or beliefs. Reality can be far messier.

And revealing that reality? Revealing is still one of the scariest things I’ve ever done, but with the biggest payoff. Because of our attraction to more than one gender, bisexuals must reveal ourselves over and over again, and these revelations look very different depending on the situation. Revealing myself in high school meant learning who would love me unconditionally and defend me against bullying. Revealing myself in college meant meeting other people like me for the very first time. Telling a male date, “I’m not straight,” meant bracing myself for comments about experimentation or male viewing pleasure. Telling a female date, “I’m not gay,” meant worrying about whether she would think I’d just leave her for a man someday.

Thankfully, when it comes to the people in life who really matter, the reveal is a time of growth, not of shrinking. In 2017, on a work trip to Los Angeles, I was lucky enough to reconnect with an ex-girlfriend from many years ago. We spent the day after my conference shopping on Melrose, sipping drinks at a cantina, and exploring the Santa Monica Pier. Over a shared 36 oz. “mega” margarita, she asked me how things were going since my last breakup.

“I’ve been talking to this girl who’s a writer like me,” I began. “We finally went out to dinner and it was fantastic. But I also met this guy at a Young Democrats happy hour, and we had our first date last week. He’s messaged me a few times since I’ve been in L.A and has been so sweet.” I smiled and shrugged. “I have a good feeling about it all.”

My ex tapped her fingertips together with delight. “Ooooh, the plot thickens! So, you’ve met a really cool girl and a really cool guy. This is the moment of truth: when you finally decide which side to pick!” she laughed, herself a lesbian, knowing how bisexual women are treated as an ever-unfolding mystery. Of course, having only been on first dates with these new interests, I hadn’t yet revealed my sexual orientation to either of them. Instead of stressing over the delicate balancing act of not telling a partner too soon but also not waiting too long, I decided to enjoy the margarita and let the chips fall where they may.

Some time later, when the girl had become a casual friend and the guy had become the love of my life, I told the latter. A miraculous thing happened. He didn’t invalidate my sexuality or make inappropriate comments about my involvement with women. He listened. He has kept on listening and made it a priority to learn more about issues facing the LGBTQ community and bisexuals specifically. He has encouraged me to nurture my relationships with queer friends and helped me get ready for Pride events. Some of my female friends who opened up to me about their own sexuality shared similar stories of supportive husbands; others wondered how they might broach the subject. Either way, my advice was the same. When you share an intimate part of yourself with someone who loves you unconditionally, it makes you stronger individually and together. You’ll cement honesty, self-knowledge, and growth as traditions in your marriage.

My wedding gown was ivory, not pink, purple, and blue, and our tables were topped with driftwood sailboats, not little Pride flag centerpieces. Given the appearances, you would think that this was a standard heterosexual wedding. But my bisexual identity lives in our partnership and daily lives: in my writing, dancing, advocacy work, and now in my husband’s advocacy work as well. If there’s one thing I’ve learned in 34 years, it’s that loving yourself and being authentically yourself to those you trust are the traditions most worth keeping.

Chelsea Bock works in enrollment services and is an adjunct professor of communications at Anne Arundel Community College. She has recently published scholarship in political rhetoric and memory studies. She lives with her husband and their cat, Lucy, in Annapolis, Maryland.