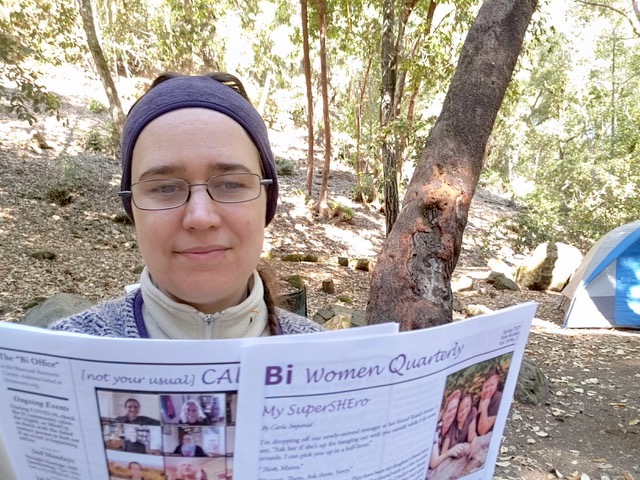 At the end of a BWQ Digital Brunch we were talking about labels and boxes, checking boxes, coming out to healthcare providers, etc., and somebody said, “I think we should all just treat our boxes the way cats do.”

My first thought was, You mean like litter boxes? But I didn’t want to say that. Then someone said, “You mean, the way they just get in and out of them?”

The original person agreed, and we went on to talk about some other box-related things, such as how many of us love checking the bisexual box when filling out forms for health care providers and other services. We’re glad that it’s there so we don’t have to leave it blank, check “other,” or fill in a blank. Someone else mentioned that some lists now include pan, and omni—more boxes!

This led to a discussion of how bisexuality used to be outside-the-box thinking, and now we can check a box. But is bisexuality actually a third box, or is it an identity the busts all the boxes? Bi+ identity is like the Tardis: little on the outside, big on the inside!! It’s an umbrella identity that includes so much more than anyone sees at first glance.

Finally, I got the confidence to say, “I was actually thinking of litter boxes, at first. And that we should just, you know, shit in them.”

Then someone else said that we really should do with boxes what cats do with things: swipe at them. They went on to explain that this is about everything, not just sexuality,

“We can get really defined by many things: our jobs, etc. Screw all the boxes and turn them all into litter boxes!” Because, honestly, they’re other people’s boxes, and we can just shit in them and let everybody else deal with the mess we’ve left by checking boxes when we don’t fit into them. Because, in reality, no one is a box. Each one of us is a free human.

So then, another thought was that if a box doesn’t fit anymore, you can just recycle it. Repurpose it as something else or regift it to someone who can use it. What a fabulous idea!

To go back to treating boxes like cats do—try ’em out. Put your head in, see if it fits. Put your butt in, see if it fits. Curl up for a while. Climb back out again if it doesn’t fit. Climb back in again, if you want to, because it felt good to be in the box. Boxes are there to be played with. They are there to have fun with: bat them, chew on them, jump in and out, try getting in and then get back out again.

Other boxy ideas that got tossed around in our conversation:

• Trying to fit into other people’s boxes is like trying to put together IKEA furniture, the box ends up all cattywampus.

• It’s okay to cut and paste, reshape, and add patches.

• It’s frustrating when people say, “You can choose any box you want, but here are the definitions—you have to fit the definition.” People want the freedom to be able to play with boxes and labels.

For example, the current definitions for the gay and lesbian boxes are so restrictive they won’t let me in. This is why it took me until I was 34 to even identify as a part of the LTBTQIAP+ community. (I heard recently from another source that the word “lesbian” used to mean any woman/non-binary person who loves other women, regardless of who else they may love. I want to do more research into this. I’m super curious now. It helps me feel like maybe I *can* join groups that claim to be for lesbians and not have to constantly clarify that I’m actually bi+.)

• I don’t want to be confined by other people’s definitions. But I love boxes, I love containers, I love categorizing things.

• Box is sometimes used as a slang term for the vagina or vulva.

There needs to be a monogamous/non-monogamous box because poly people have different physical and mental health care needs.

• We need to normalize STI testing so requesting it doesn’t put you in a box.

This summary is based on my memory, experience, and notes from our conversation and not meant to represent the views or opinions of anyone specific or of the Bi+ community as a whole.

Tobi S. (she/her) is a musician, singer-songwriter, dancer, writer, basketball player, friend, daughter, cousin, niece, and teacher. She identifies as a Bi+ Queer Womxn on the autism spectrum who loves order and categories, but hates it when others box her in.